In this article I detail why I saw fit to overhaul the current Artifacts, as well as add almost thirty new ones. I also describe the changes I've made, and how they're going to affect you, the player.

When I first started on the creation of Redux, I aimed to combat a number of different issues that I saw as being 'flaws' in an otherwise fantastic game.

The first of these was Realism - the main reason I created Redux.
The second was Atmosphere - a feature I thought was lacking in Call of Pripyat, compared to Shadow of Chernobyl.
The third was Items - I thought there was a severe lack of different food, drink and medicinal items in the game.
The fourth was Artifacts, and that's what I'm going to talk about now.

Artifacts have been one of the biggest features in the S.T.A.L.K.E.R. games since the very beginning. The products of the fabled anomalies in the Zone, Call of Pripyat by default contains over twenty different artifacts, if you include quest-items.
This is certainly a pretty respectable number, that I don't contest, but the main flaw with the Vanilla artifacts is that they're boring.
Vanilla artifacts cover ten categories, including radiation, hunger, health and more.

Each category has two or three artifacts which affect it (with the exception of radiation and hunger), and are usually +2, +4, +6 or +3, +6 to resistance, for example, 'Stone Flower' provides +3 Psi Resistance at a cost of +1 radiation.
All of the artifacts follow predictable, boring patterns, as shown in these images: 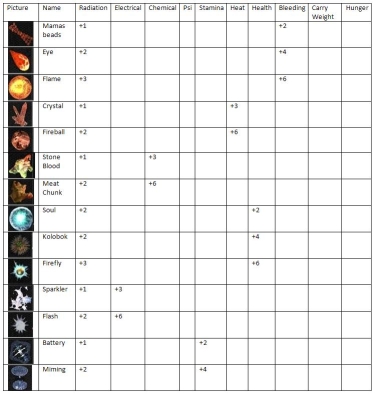 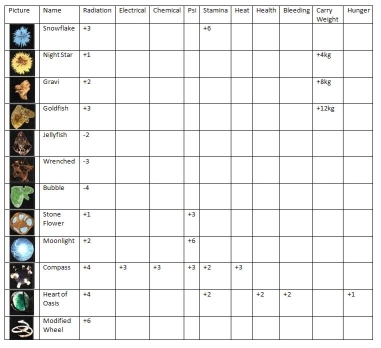 What I am doing in Redux, is throwing this out of the window.
No longer will all artifacts trade one resistance for a dose of radiation, or absorb radiation with no side-effects.
You'll no longer be able to pile two 'Bubble' and three 'Flash' into your SEVA suit and become invulnerable to Electro anomalies, or any other anomaly with a similar setup.

Over fifty artifacts in total will be available, with completely different effects, one might emit radiation but grant resistance to heat, as well as allowing you to carry 2 more kilograms.
Another may absorb radiation, but decrease carrying weight, and make you bleed more. There are many, many possible variations, and you'll just have to scan them down to find them out.

I hope this article has been informative, and has let you see how I feel about the current system.

Check back again soon for another article!

cool, looking forward to this

Will you also review all the prices and weapon damage/precision?
Well just like the other Redux.

Neat. Could be very interesting.

I think you should leave the Compass and Heart of the Oasis as they are, since they're meant to be the super artifacts of the game. I still wish the Oasis quest wasn't so anti-climatic. For the quality of the artifact, the challenge to get it should have been greater and more interesting.

I'll be changing them slightly - as they currently are, they're basically useless. The Compass does everything, but not very well, and it's not really worth using over one artifact that boosts by +6. I want to make it worth having.
The Heart of the Oasis is also undertuned, I believe, and hopefully I can buff it a bit as well as making it a bit harder to obtain ;)

i am liking what i am seeing

Is this mod make us add silencer for any kind of guns ???
Sr about my bad english