In the upcoming version, Surface-to-Air Missile (SAM) systems will behave much more realistically, giving you and the air player some additional tactical cards to play during your cat & mouse games. In this article we will go over on exactly how the SAM systems are being changed in the mod for World in Conflict RTS game.


First: Problem with Missile Guidance
We can't have realistic SAM's without doing something about guidance of homing anti-air missiles.

In WIC, all homing missile projectiles use what is known as "pure pursuit" or "tail-chase" navigation. With a pure-pursuit guidance law, the logic is pretty simple. The missile simply chases after a moving target like a dog chasing rabbit.

The problem of pure-pursuit missiles is that when the target commences a sharp maneuver at the last few seconds, the missile simply runs out of aerodynamic energy to re-acquire the target and chase after its new position. This results in a miss and explains why sometimes missiles "circle around" the battlefield to try to re-engage the target.

With lead-collision guidance law, the missile control script determines the range and speed of the target. With those figures known, we then crunch out some numbers using trigonometric formulas and calculate what is known as "LOS deviation ratio" or simply LOS Deviant Rate. The LOS Deviant Rate is the closing rate from the missile to the target that is in direct line of sight of each other. By keeping the missile pointed toward the target along the same deviation ratio, we end up creating a mid-air collision between the missile and the target, resulting in a kill.

Some Technical Problems to Overcome
While lead-collision navigation is much more efficient, we found that it is pretty much useless when engaging targets at long range. Once you get past the range of 150 wm (wm stands for "WIC Meters"), you start getting rounding errors in the math calculation required to keep the LOS ratio on target. Past 250wm, the errors are significant enough to result in a total miss where missile overshoots or undershoots the target's intended flight path.

Moreover, the script requires your team to have a fog-of-war vision LOS on the target the whole time during engagement from start to finish (in real-life this would be known as "radar illumination"). Because the script requires target range/speed information every 0.3 second, if your team's vision LOS on the target is interrupted, missile has no idea where to go anymore. This makes it impractical at long range where target has sufficient time to evade the missile or when the target starts ejecting chaffs and flares.

So to improve the kill probability, we wrote in a feature known as "proximity fusing", where several invisible projectiles are expanded (like a shotgun blast) once the target is within 20wm from the missile. But nevertheless, our lead-collision missile is only useful at short-range kills. It is still inaccurate at longer ranged engagement because of increased errors in math target leading calculation.

Solving Accuracy Problem at Long Range: Dual-Stage SAM
Since lead-collision homing is accurate at short range (but inaccurate at long range), we've put some thought into how to fix this problem and came up with this idea: get the lead-collision missile as close as possible to the target, up front and personal.

How do we do this? What we did was, we created an invisible game unit -- this unit is called the "kill vehicle" or "interceptor". You can think of it as the missile seeker head and the warhead packaged into a game unit.

We then place the invisible game unit on a Ballistic Shooter projectile, which by the way is used by artilleries like howitzers and MLRS. So the "kill vehicle" rides in a ballistic projectile, which transports it to the area where enemy air is. Once the kill vehicle arrives, it separates from the ballistic projectile and switches to lead-collision guidance to perform its end-game kill against the air target.

This effectively makes the system a "Dual-Stage" SAM, where stage one (boost and mid-course) is performed by ballistic projectile used by artilleries, then stage two (terminal phase) is when it transforms into lead-collision homing for final engagement.

Here is an animation video of "dual-stage" SAM boosting off with a ballistic projectile:

Delivering the "mail" to right location on time, on target
When engaging air at long ranges using dual-stage SAM system, it is very crucial that we aim our ballistic projectile correctly. We can't just aim the ballistic "SAM" to where the air is currently at, because by the time we fly and get there to deliver our "mail" (the mail being the kill vehicle), air player will no longer be there anymore! You can think of this as placing down an Air-to-Air strike in vanilla, un-modded WIC game.

So to resolve this problem, we provide initial "mid-course" guidance update to the ballistic projectile in flight, telling it to go where we think the air player is going to be (we crunch out some numbers with our target leading code for this prediction), not where the air player is currently at. The idea is that by the time we drop our mail (kill-vehicle) in the area, our kill-vehicle will be in the same place as where enemy air is, then go pit-bull to kill using lead-collision guidance.

SAM Energy Management for Game Balancing and Realism
A long ranged SAM that covers most of the map is simply overpowered no matter which way you look at it. So how do we balance this for multiplayer?

We go back to our tradition of balancing the game with more realism: rocket energy simulation.

In real-life, SAM's are typically not launched at their maximum range, because rockets lose energy after their powered flight has been completed and eventually slow down to crawl. By the time the rocket gets near its maximum operational range, it has lost enough energy that the target aircraft can make simple adjustments in its maneuver to dodge the missile with ease.

So to simulate this, consider this diagram of how we are implementing Patriot SAM site in the game: 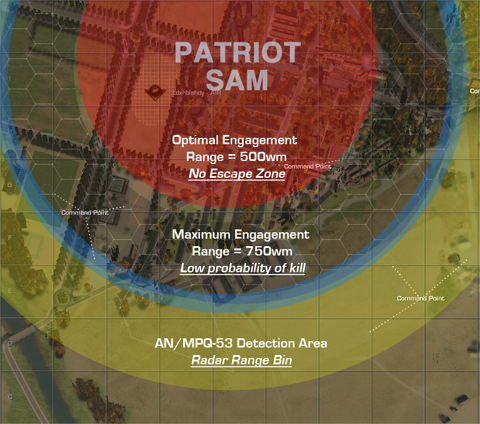 At 500 to 750wm from the SAM site, the interceptor will lose lot of energy that when it performs lead-collision guidance to hit the aircraft, it will not have enough aerodynamic energy left anymore to perform tight maneuvers. So the air player can easily dodge this missile without even dropping chaffs/flares by simply moving sharp. The missile will not be able to re-acquire and will just go ballistic into ground.

However, once the air player violates further into SAM territory and enters the "No Escape Zone" at 500wm, then all bets are off. The rocket will not lose enough energy at that radius and will be much more difficult to dodge, making it extremely dangerous for air to get any closer.

Test Demonstration of New Dual-Stage SAM Prototype in No Escape Zone:
Here is a demonstration test video of our a prototype dual-stage SAM unit (we are using the Korean KM-SAM unit for this test, but all existing SAM's including Patriot and S-300 will receive this upgrade).

The test targets have violated the no-escape-zone and are not maneuvering. You can see the devastating effects of high-speed lead-collision shot from ballistic flight.


That's it for now. We hope you'll enjoy our new SAM engagement system. It will be more realistic but most importantly, it will create a better balance for air and support players together. Air players will be given the opportunity to avoid and dodge SAM's, however will have to respect the SAM site and not come too close to it, into its no-escape zone.

very nice. good to know about what ill be facing as air. like your guys news posts btw, theyre always so full of info. i wont pretend to understand more than half of all the SAM stuff, but i get the jist of it. plus its good learning material

What if I fly very, very low in the 'no-escape zone'? Will they(the SAM) get me?
And if they do isnt that supposed to be the job of the light and medium AA?

Depends on the terrain and how much clutter there is to other team's radar picture.

The problem of IADS is that there are several radars deployed by 1 or 2 support players that there isn't much of hiding spot in low altitudes anymore unless you put some kind of hard terrain between you and the SAM.

That and ofcourse, you can be sure that a SAM site would be guarded by SHORAD's for close-in point defense. It mostly comes down to the terrain and whichever player knows the map better than the other will win.