Rock 'n' Roll Will Never Die!, a rocking indie adventure inspired by classic point-and-click games, heavy metal, and underground comix, is finally out on Steam (PC/Windows). It's time to jump into the beer-soaked denim vest of a middle-aged teddy bear to orchestrate the comeback of his old glam metal band. One tiny problem in this quest is the fact that glam metal has been the laughing stock of everyone in the music industry since the 1980s, but a true heavy metal heart never stops beating!

The game deals with rock clichés and music industry shenanigans through comedy and satire. The player gets to experience all the fun that the life of a middle-aged musician has to offer: organizing schedules with bandmates who have families and careers, rehearsing in moldy basements, and playing Tuesday night support gigs in empty bars for no money. All the things that are collectively known as "The Rock 'n' Roll Dream"!

After over three years in development, Rock 'n' Roll Will Never Die! offers about ten hours of wild adventures all over the rockosphere with cool hand-drawn graphics. The project director is Valtteri Tavast, a Finnish cartoonist and musician, and many of the game's adventures are based on real-life experiences as a bass player in a punk band no one's heard of. 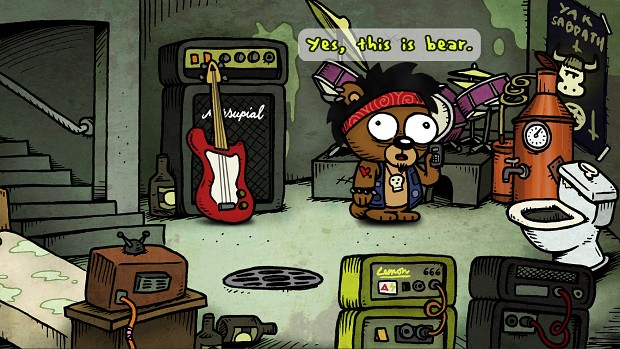 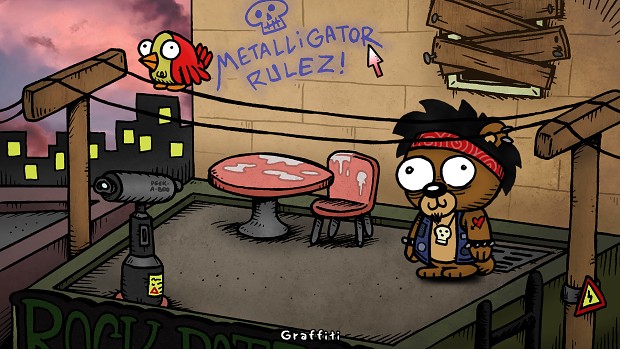 Exciting news in the land of dinosaurs - GOG release and a new project?

GOG release! A new project announced! What a time to be alive!

The day has finally come - Zniw Adventure is out on Steam!

A demo for our upcoming folk horror narrative-adventure is available until October 13th as part of the Steam Game Festival: Autumn Edition

Created in a tiny team of two, Zniw Adventure is a hand-drawn and animated point and click game with dinosaurs - and you even get to play as one! Charming...

The Excavation of Hob's Barrow

The Excavation of Hob's Barrow is a folk horror narrative-driven adventure. Explore the isolated moors of rural Victorian England as you uncover the mysteries...

Nightmare Frames is a supernatural thriller where you'll step into the shoes of Alan Goldberg, in the search for the scariest horror film of all time...

Hair metal's not dead, it just smells funny! Get your denim vest, bandana and makeup, and dive into a point-and-click adventure as a middle-aged teddy...

Shape Village is a remote community of cute characters composed of basic geometry. Beyond the veil of cuteness is, however, a dysfunctional social structure...

The Cat Lady follows Susan Ashworth, a lonely 40-year old on the verge of suicide. She has no family, no friends and no hope for a better future. One...

There is nothing Joe wouldn't do for his wife. But as they try to save their marriage with a romantic getaway, things go from bad to worse, and from worse...

Alfred Walsh is the new librarian, but on his first day he will accidentally unleash a dreaded curse upon the shelves within. He must fix things fast...

Hi guys. Just to clear up the confusion regarding 'Go to Hell Dave' and Mac. Jaggers pretty much nailed it in his last comment. AGS does support both Mac and Linux, to a certain degree. But they are older versions of the engine and at this point, we're not too sure what limitations that will present to us. All we can really do at this point is build the game in a windows environment and then see what, if anything, we can do to port it across afterwards.

Having said that, if enough Mac or Linux users show a desire to play this game then we will endeavor to do all we can to get a workable version of it on those platforms.

I've built 32-bit and 64-bit versions of the latest official AGS revision on Github, and have played halfway through the Resonance demo with zero problems! I'll continue (and file or fix any bugs I find along the way), and move on to the AGDI & IA fangames, and then Blackwell & Gemini. If they all work just as well, then I'll consider the port complete.

If you make a demo for me to wrap up, and I'll do so and send it to you (you can also have your Linux buddies test it out as well). The Linux AGS port is not perfect currently, but pretty darn good. I'll take a look a the native Mac interpreter (no idea who's working on that), nor am I particularly fond of development on OS X, but if it helps the community, I'll put some time in :-)

We plan on releasing our game on mac, still not certain of the technical implications of it yet.

Currently, every AGS game I've seen on Mac uses a Wineskin wrapper. While that approach is a dirty word in Linux (due to Wine's inconsistent behavior in Linux due to library dependencies, 64-bit vs 32-bit issues, and other weirdness), in the land of Fruit Flavored computers, the picture is not so clear. In fact, commercially wrapped ports of triple-A games are distributed for OS X; take a peek at Portingteam.com ... for some perspective on the phenomenon. This isn't to say it's perfect, but it's almost certainly what you'll end up doing if your release date is this year, unless you (or someone on your team) wish to be a Mac AGS porting programmer and dig into engine development.

I'm a tad confused. The available platforms list Windows, Mac and Linux, yet all the games I've seen on here made with this engine are listed as Windows only... :|

The official site only has Linux and MacOS versions of the 2.x engine and, while I remember running across the beginnings of a 3rd-party port of 3.x to Linux and MacOS, I can't remember where I put the link.

Also, it's been a while, but this may be one of those game-builder engines where the resources and/or scripts are bundled into the EXE, making it difficult to take a game and swap the Windows binaries for Linux or MacOS ones.

Linux went unmaintained for a while (back when AGS was a closed source engine) after the maintainer of the port became unable to support it. After that, periodically, larger fan projects would attract someone to request the code from Chris Jones (CJ), who would let them have it, provided they didn't share, and as such, that person would patch it up and get it going for their team's game or two, and then share the patches with CJ.
Then, last year, he opened AGS sources (artistic license, IIRC) and multiple maintaners came out of the woodwork. I built a poor version of the Linux AGS intepreter for a fangame called "PledgeQuest" supporting the Two Guys from Andromeda SpaceVenture Kickstarter project (spiritual successor to the Space Quest series). It was based on bero's work on the SQ fan game Vohaul Strikes Back ( Sqvsb.com ), which was packaged up for Linux. My version kinda sucked (missing sound, for example).
Now, JJS in the AGS community is patching it heavily, including alpha quality support for 64-bit Linux (which will eventually go toward 64-bit Windows as well). I'm going to hop in there and do what I can to help out, but for sure AGS interpreter support on Linux is back in a big way.

That's becuase no one plays games on a mac (at least no one in their right mind) and anyone on linux should know how to run a game in wine.

Firstly that doesn't answer the question at all, shows a complete lack of knowledge in the area and is just not useful. Wine is available on macs too, along with other stuff like steam etc. The only reason for the lack of games on the platform is because almost the whole world has windows and it is easier to make better gaming hardware for windows, unless you want to make a hackintosh.

Mod SDK & Community
Built a game for Adventure Game Studio and want to support mods? Try mod.io, a cross-platform mod SDK created by Mod DB which makes it easy to get a mod community up and running in-game. Currently seeking games to integrate and promote