This is a beta release of DCG v4.5 for the Men of War: Assault Squad 2 game packaged as a single download - the Map Pack is included in this release. However, the Unit Pack is not included because it is still being worked on. Click "read more" for full change log. Note: this release has a number of quirks due to changes in Men of War: Assault Squad 2. Most importantly, the most recent patch broke the mechanism that allows soldiers' inventories to carry over to the next mission. Additionally, the minimap and some material files do not reload between missions due to caching by Assault Squad 2. This can lead to strange textures and the minimap being incorrect. There is a workaround for this: the problem goes away if you go to options/mods, disable and enable the campaign mod between missions (or exit the game entirely). Disableing and re-enabling the mod refreshes the cache. It is not possible for the DCG team to fix this, but perhaps Digitalmindsoft will fix it if users request it. 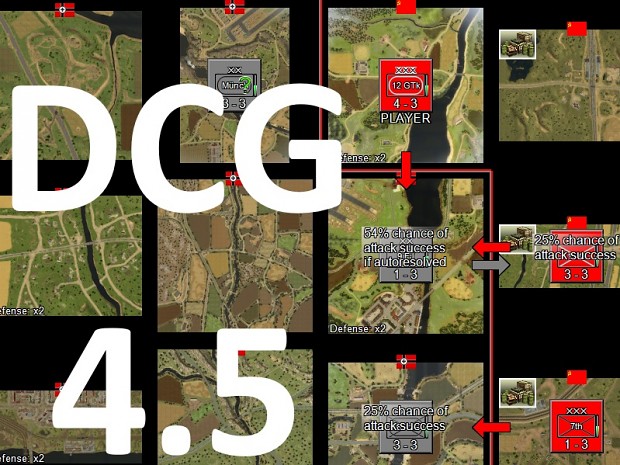 What do You reckon is the best way to contact Digitalmindsoft about the fix mentioned?

Through the steam discussion forums for AS2

I'm kind of confused which one should I download for AS1? Sorry for such a silly question. :D

There is no v4.5 for AS1, we decided to drop support/updates for that game, since most people either play vMoW or AS2 these days. We simply dont have the time or interest to support three different versions of DCG.

Which version of the game do I need? The latest version does not work.

I have two questions:
-Is Italy not included in this version for now?
-In some maps I cannot "zoom in", I have to play seeing the battlefield from the default point of view, I can zoom out but if I try to see a close up of my units I just cannot pass from a determined "height", is this normal?
Thanks!

Italy isnt included in AS2 for now. They´ll be added when the unit pack for AS2 is ready for relase, but I have no idea when it will take place (I´m not involved in AS2 development of DCG).

Can´t answer about the "height" issue in AS2 either (I don´t play AS2 at all).

Your guess is correct, this version does NOT support the new Origin version of AS2. I dont own Origin (or any of the other DLC's except for the Iron Fist or whatever the 1st DLC was named) and I dont know if anyone else in the shrinking DCG team do own it.

Please hint what you need to do to be visible minimap.
At the municipal map shows "can not load dds coded DXT textures must have multiple dimensions of 4"