Post tutorial RSS Wiki: A Guide to Pitching Your Game

Here is a guide to pitching a video game that I came up with while we were pitching Party of Sin to distributors. This is based on our experience and things we would do different. I allowed for readers to edit so feel free to add anything you think is insightful.

I am putting this piece together because I think pitching a game can be one of the hardest things to do. The game is always so clear in the developers head with regards to how the art will look, the gameplay mechanics, the difficulty, and so on. However, when it comes to put these points on paper, it can surprisingly be quite difficult. This article will shed some light on how developers can maximize the effectiveness of their pitch and capture their audience.

1. Elevator Pitch: In One Sentence, What is Your Game About

This is probably the most important section of your pitch. This will summarize your game by touching on all the main elements your it has to offer. The goal of this section of your pitch is to explain everything you will be doing on a general level. Don’t get to specific; the details will come later. You should show what the player will be doing in your game? Will they be racing, fighting, building, collecting, puzzling, platforming, etc? You would also want to explain what the theme of your game is as well. Will you be a fighting as a rabbit or platforming as a piece of meat? Unique themes are a great way to differentiate your game from the other ones and should be mentioned at the beginning of your pitch. 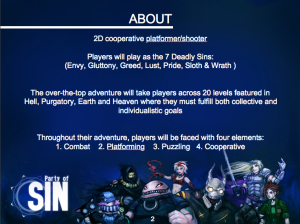 As you can see, Party of Sin was explain as a 2D platformer where the players would inhabit one of the Seven Deadly Sins and fight across four mythical worlds to earn their place in Heaven. The game was then broken down further into four parts: Combat, Platforming, Puzzling and COOP. The order was very important here because each element introduced the one following it. For example, the most basic element of Party of Sin is the combat, while COOP, is in the more complex. It is also important to note that COOP affects the way combat, platforming and puzzling is done. Therefore, you would want the presentee to know what you are talking about when you refer to the combat and anything related to it, like enemies.

2. Get to the Specifics

Once the general overview of your game is explain, start breaking down each point. If you’re making a racing game, this is where you might want to explain how you have very interesting AI drivers that can adapt to the player’s driving habits or explain how you can pimp out car in a hundred different ways. If you have a unique art style you can explain how this will effect the game as well. Don’t be shy to show off what you are excited about in each element you broke your game into. 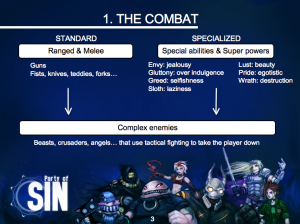 As you can see in the combat slide posted above. Combat was broken down into two components: standard and specialized. This is where the details come into play. In Party of Sin, players will have the standard weapons such as ranged and melee attacks that are uniform across all sins. On the other hand, specialized attacks are specific depending on which sin you are playing as. So if you are Lust, you have a whip as a melee attack and can stun enemies with your special ability. The same thing goes for the platorming and puzzling slides posted below. 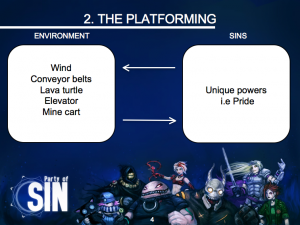 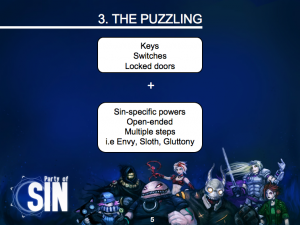 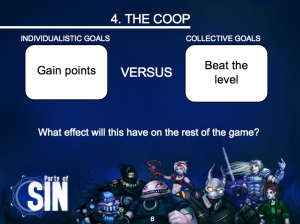 An easy side note: try note to clutter your slides with too many words. Use images, graphs, and videos to replace them if possible. Use the slides as cue cards and verbally elaborate on each point.

This is hard to decide when presenting a game. Do I show off a build, even if it is not complete? The logical answer would be to show as much as you can as early as you can so the person receiving your pitch can get the full picture. However, if the game isn’t polished and there are still a lot of noticible faults to the game, they might not be so forgiving. When we were pitching Party of Sin, we had mixed feelings from distributors and I think it is really a case by case situation.

The main thing to consider when deciding if you should show the game is:

A- Is the game stable: If the game won’t crash ten times during your presentation, then you are probably ready to start thinking about showing your game off.

B- How complete is the level you want to show off? You would want to consider how your game looks. Is the art polished, animations smooth, is it optimized to some degree so it’s not choppy, etc.

C- How finalized is your gameplay? (Most important crit) At the end of the day, the distributor will be looking at one thing: Is this game fun? If they think your game will be fun, and sell, then that will override all the rest. If you have your entire gameplay streamlined and it can be well communicated in your demo, then you should be sure to show your game off. Forget about trying to make a nice video showing what your game will be about or explain it with fancy words. Show them the real deal!

4. Other Things to Include

A- Storboard: this is important for showing that you have a plan and that you are organized. Presenting one level might be cool but it is important to show them that you have more to offer. A nicely sketched out storyboard showing gameplay progression is sure to be a winner.

B- Your team: explain who you guys are, what your experience is and what your goals are. Show that you are human but are ready to deliver on your promises.

C- Smile: doesn’t really change much with your presentation but I suppose it never hurt anyone.

If you guys ever pitched your game to a distributor, company, family member, etc, I would love to hear about it. This is a set of guidelines I came up when we were pitching but would like to know how others approached their pitches. Feel free to drop by our website anytime at PartyofSin.com or follow us on Twitter @CrankshaftGames.

Alex and the Crankshaft Games Team

Good article. Finally i know what about your game is and that tips are useful, go this way guys :)

Thanks for posting this, I think many developers who just want to jump right into making games can benefit from this. Documentation and planning is one of the most important stages, without it you are highly likely to fail.

have to say thumbs up on this one

This type of info is useful for those also simply need advice.
For example, some designers can use this info for other things like game boards or other ideas relating to games.