These are the console commands for Unreal/Unreal Gold. Feel free to play around with these commands, they do help modding and making content from time to time (like the open map command which I still use from time to time, when I really need it). Also I grabbed these lists from www.oldunreal.com.. I haven't included everything so you can view the rest of the other commands on the page here: Oldunreal.com

Interestly enough, the original page which list these commands on the Epic Games, which these commands are from, isn't online anymore, hence why I thought it was the worth reposting here. I've uploaded the page with images to explain how to fully use these commands as it's a primate list and user behaviour on using commands has changed alot. You can still use these in game and for WIndows 7/8/10.

You can use these commands in command prompt (the quicker way):

... or create a shortcut of the unreal.exe file and place these next to the target file on the shortcut: 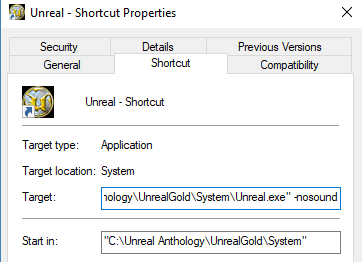 C++ Console Commands (Only works on the local machine)

The rest of the commands here could be used ingame or another words, when Unreal/Unreal Gold is running. Hit the '¬' button to bring up the console and type these in to navigate your Unreal application.

UnrealScript console commands (Can be used by remote administrators)