This is an archive of the official AI characters tutorial created by Remedy.

This is an archive of the official AI characters tutorial for Max Payne 2. Created by Remedy. It has been archived here due to Rockstar taking down the official Max Payne 2 website recently. I've taken the liberty of fixing all of the links here to ones that work.

In this tutorial we will build an AI-network, one character that can combat against the player, and a simple script for the character.

Download the level files for this tutorial from AI_examples.zip

The characters in Max Payne 2 use a manually built AI-network to navigate and sample the environments. It consists of "AI-Nodes" that connect to each others, creating a network of connections over the level. 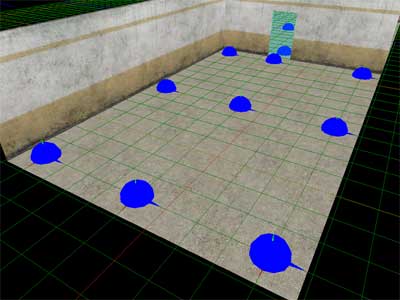 AI-nodes as seen in MaxED2 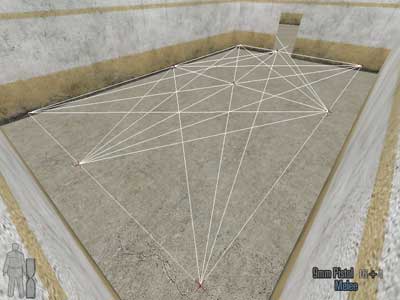 AI-network as seen in the game

In other words, if you want to have a character to move from point A to point B, there needs to be an AI-network there, otherwise the characters don't know where they can or can't move. And you need to build the AI-network yourself by placing nodes, which will connect to each others automatically.

To begin with the tutorial, open up the "Work" level of this tutorial to MaxED2.

Before creating any characters, let's first create an AI-network to the level. To do that we need to place AI-nodes onto the floors. Let's create the first one to a corner, any corner will do.

In F4-mode place the grid onto the floor (SHIFT-A), switch to F3-mode and point at the grid point where you want the AI-node to be created. 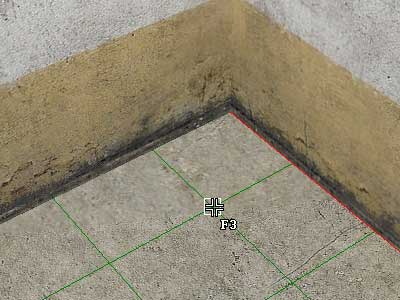 MaxED2 will still show you the properties of the newly created entity. We don't want to change any of them so press OK.

A blue sphere will appear onto the grid. If not, check your display filter (F1) for "AI-Nodes" 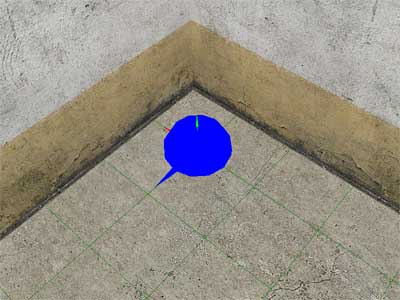 This is an AI-node and an AI-network will be calculated between the nodes that you place.

To continue building the AI network, copy/paste AI nodes to each corner of the two rooms, and two more nodes to both sides of the doorway. 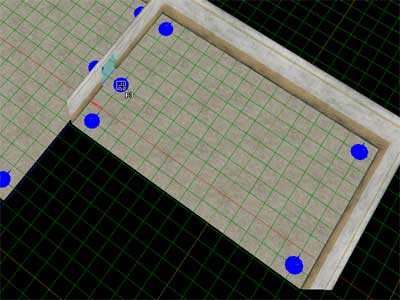 After grouping the nodes to the rooms (CTRL-E in F5), you now have little bit more than bare minimum of the AI-net built. If you export the level to the game you can view the resulting AI-net by pressing F8 in the game in developer mode.

Extra words about proper AI-node placement
As the enemies must use the AI-net in order to move around the level and seek for their target, you must not leave any areas into the levels that aren't overseen by an AI-node (otherwise the enemies cannot follow the player properly). Also every AI-node must have a connection to another AI-node so they will all build an island. There can be multiple independent AI-net islands in the level, but the enemies cannot move from one island to another by themselves.

The AI-system of Max Payne 2 utilizes environment sampling also via the AI-nodes. For example the AI-characters can determine in real-time if any of the AI-nodes nearby is in cover from their target ("Cover node") or is a valid shooting spot against their target (i.e. has Line-Of-Fire, "LOF-node"). 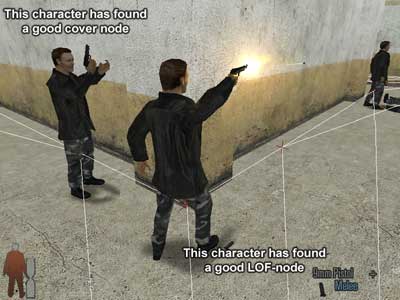 And as such is the case, it is usually a good idea to just mechanically cover the areas so that every inward corner has an AI-node (because corners are the last resort for cover; this way enemies will more likely find cover when needed) and every outward corner has AI-nodes built around them. 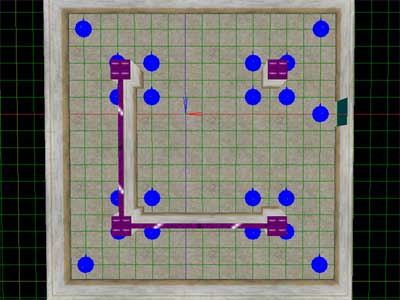 Ample amounts of AI-nodes don't really slow the game down at all so you don't need to worry about that. The orientation of the AI-nodes doesn't have any effect on anything either.

Extra words about AI-Net debug tools and troubleshooting
When you are making AI-nets you will notice that when you visualize the AI-net in the game (F8), the nodes and the connections are sometimes drawn with different colors. All the AI-nodes in the same AI-net islands are drawn with the same color, so you can easily see if one location has an AI-net connection to another. If the AI-nodes are in different colors you will know there is no connection.

When calculating the connections between nodes, the system does a simple Line-of-Sight (LOS) check between the nodes that are found from the exact same height. Thus the system doesn't notice pits between such nodes (and basically you could build AI-nets into thin air if the nodes just are at the same height), and it is recommended to use AI_Node_Collision_Nodraw material category to build geometry between such nodes. This material can be used to build geometry that the AI-node connection calculation treats as solid geometry but it doesn't get exported to the game. Which also means you can built bridges with AI_Node_Collision_Nodraw to create AI-nets over pits.

For nodes that are on different heights, the system does a more complex test to see if a character could actually run from one node to another. In practice this means that the pits mentioned above would be taken into account also by lifting the nodes on the other side of the pit slightly.

For building AI-net that makes the enemies jump down from ledges, it is recommended to place the AI-nodes right along the edge, and to place another AI node right below. 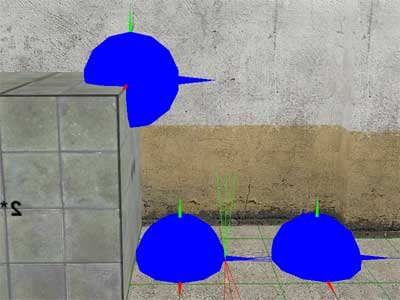 The maximum height for an AI-connection to drop vertically is 5 meters. Thus also with long staircases you will need to have AI-nodes placed along the stairs so that the vertical length between two nodes is never more than 5 meters. The nodes simply will not connect otherwise. Also it is highly recommended to pad all the staircase with character colliding slides (You can use CharacterCollision_Nodraw material category).

Also the nodes check the connection only against the nodes that reside in the same room or in the neighboring rooms. I.e. No connections will be made through two exits, which means every room must have at least one node if you want the AI-characters to be able to navigate through..

Now that we have an AI-net in place, we can create the first enemy to the level. Again place the grid onto the floor, point at a desired location in F3 mode, and press "N". From the "New entity" dialog select entity type "Enemy". It doesn't matter if the character is not standing along an AI-Net path as long as it has a direct access to an AI-node.

At the "Entity properties" window we are only interested of the enemy "skin" selection for now. All the different looking enemies of Max Payne 2 are found from the "Skins" drop-down dialog. Let's choose C03_Russian_A for this tutorial.

TIP: It is usually a good idea to rename every entity that has an FSM with something that You find descriptive. As the complexity in your level goes up, you don't necessarily want to have every character called "Enemy_XX"

A cyan sphere will appear onto the floor, marking the startup location of the enemy. If not, check your display filter (F1) for "Keypoints"

By default, the character will not actually do anything but stand there. We will still need to command it into some combat tactic. We can do this with a message called "AI_SetTactic" which takes the name of a tactic as a parameter. So open the FSM dialog for the enemy (Select the enemy and hit "B" in F5-mode), and to the "Startup" event add:

Now export to the game and the character will combat against Max.

Extra words about enemy groups
In the entity properties window of the character you saw a drop-down dialog called "Group". This refers to a system that you can use to bundle multiple enemies into groups, which will cause them to share their perceiving senses, and when setting targets they can be referred to by their group name. You can add and manage groups from "Edit groups" button. Group called "PLAYER_GROUP" is reserved for making AI-characters to belong to the same group as the player.

Extra words about AI-controls
If you want to freely try out various AI-controls, here's a brief reference for the commands:

Here are the controls for managing the inventories of the enemies.

will drop a painkiller from the left gunbone of the enemy. The bone name is in quotation marks because it includes spaces.

You can also manually script the characters to do various things. Basically the scripting system works so that you can send bunch of commands to a character which it will store as a stack and will execute one by one. For example you can script a character to walk to a specific waypoint, then animate, then crouch and shoot.

Here's brief descriptions about the commands. 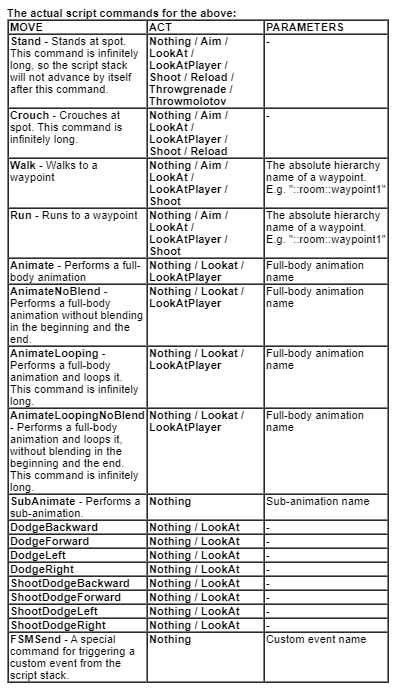 Note that all the above scripting causes "force update" to the characters, except for STAND, CROUCH and ANIMATELOOPING, for which you should use the manual command "C_ForceUpdate( time );"

Before going any further, let's add a simple script stack to our character in the tutorial level. There's a small pile of explosive objects in the level, so let's say we want the character to be aiming at the door initially, and when seeing the player, to dodge into the pile of explosives for cover.

First let's move the character to a convenient spot, some 4-5 meters away from the explosive pile, orientated towards the doorway. 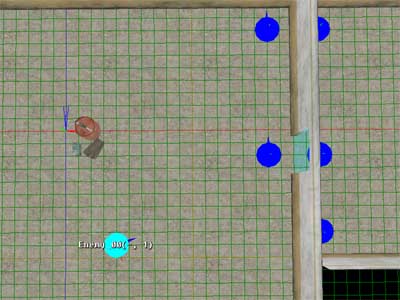 To make the character aim towards the door at startup, we add couple of messages to its StartUp event, so it will look like this:

In short, we disabled hearing so that the enemy won't drop out from the script as the player is making noise in the previous room, and we added a script command to perform an animation that just aims forwards.

The OnActivate event is an event that is triggered when a character perceives its target for the first time, so we will use that to trigger the script for dodging to cover. It should look like this:

We disable the perceiving again as we want the enemy to perform the script through, and we add a script command to dodge left. We also enabled hearing back on, although it doesn't actually affect the behavior during this script (since all the perceiving is blocked anyway), but it is here so that the enemy will have hearing after the script.

Here is more AI debugging information which you should find very useful; You can dump information about the state of an AI character with AI_Dump -message. It requires .AI suffix to the receiver so it gets sent to the AI-component of the character, e.g.

You can also dump the state of the character itself, by C_Dump. It doesn't have a suffix at all. E.g.

And you can turn on some AI visualizations by sending AI_EnableVisualization( true ); to the AI component. E.g. 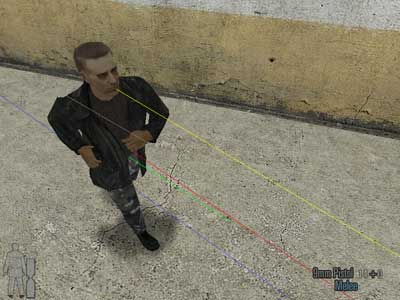 The character can see his target as his line-of-sight is true (right yellow line. It is dim when LOS false), but he cannot shoot as his line-of-fire is false (gray line). It is bright white when LOF true). He is running along the blue line. 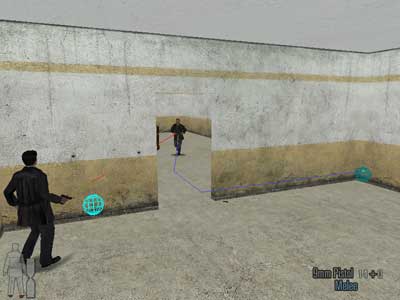 Also note that the AI net that was built in this tutorial is too sparse to really work well. You shouldn't have very large distances between AI-nodes. Even then I don't recommend you fill empty room with lots of AI nodes if you intent to add any geometry into the rooms that must be taken into the account with the AI-net, as you will be adding more nodes later anyway, and this way it won't become a mess of nodes that easily.

If you don't seem to get the desired behavior when building scenes involving enemy groups, scripting, and OnActivate, here's some detailed information about OnActivate group behavior when using AI_EnablePerceiving: