These are some tips and tricks for building custom maps with Lawmaker. They might not be interesting for experienced Lawmakers, for they deal just with general topics. I've put them up for all new Lawmakers 'cause I found no adequate newbie-tutorial. So I wrote (and still write) down things I found (and still find) out while editing levels myself or while reading the posts at the Code Alliance.

How to insert a door

Basically, a door is a subsector of a room, so inserting a door is no major problem. Let's take an example, we want to insert a door into this sector:

First step: We add a subsector to the selected sector by pressing CTRL+K. Then we resize this subsector until it's about as large as a door should be. The sector could now look like this:

Now we select the subsector and set its ground height to the height we want our door to have. It must not be higher than the room the door is in, else you get some funky results! Now, finally, we texture the outer walls of the door. If you have a look at it now in the game, it should look like a door should look. But it won't open yet!

There are two kinds of doors in Outlaws, one are sectors marked with a special "door" flag. In order to make our door open, we open up the "Flags" dialog and select the flag "Door" 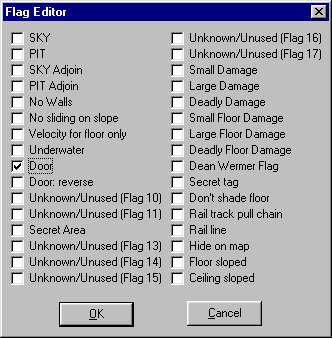 The other kind of doors requires some INF-scripting. Let's give a sector a name at first, let's say "DOOR", for example. Outlaws isn't case-sensitive, so "DOOR" or "DooR" or something else would make no difference. For INF-doors, it is very important to remove the door flags from the sector again.

First, we select the eight walls of the door and set the flag "Morph with sector" (64). If you do not set this flag, the door won't open later on. Now we open the level's INF file add make an entry like this (without the line numbers):

The most tricky thing in this sequence is the spinning point. For my example, I took the exact middle of the right wall of the sector, I just added one vertex' z-coordinate to the other's and divided the result by 2. The x-coordinate of the two points are identical. Let's have a look at it in the game right now: Surprise, surprise, the door opens...

"You need the Iron Key!"

By now, there's one big mistake on our door: It opens all the time. Sometimes doors are locked, so you have to find a key to open it... Locking our door means some changes in the INF sequence. Doors using the door flag can't be locked, they always open. So here we go:

Both the object and the screen messages have certain numbers. They can be seen in the local.msg, which hides out in outlaws.lab. When using the script editor that comes along with Lawmaker, a dialog where you can choose the stuff you need pops up when double-clicking the properties USER_MSG or OBJECT / OBJECT_EXCLUDE. Well done, that script editor! There's also a template plugin for Lawmaker, which adds some entries to the menu. When choosing such a template you just have to adjust speed and coordinates.

By the way, when using locked doors, be sure to place the key to open it somewhere in your level!

"It's locked from the inside!"

There's another kind of doors: They don't open from the outside but only from the inside! Unfortunately, this can't be done by just changing that EVENT_MASK (dunno why there's an event "nudge from inside"). This is the first part of the new modified INF:

Now I'll explain it: By using just the first part, the door will never open when you nudge it. Think of EVENT_MASK 0! We use another CLASS, called ELEVATOR_MORPH_SPIN1. SPIN2 means doing some spinning work after a push, SPIN1 means spinning work after other events, or after certain INF messages (don't mix up INF messages with user messages!). But let me explain the second sequence now, you will see what happens exactly in the engine:

Imagine a modern 3D shooter without ladders! Unfortunately, the Dark Forces engine (which is used by Outlaws) does not support ladders or something similar, but there is a little work-around to get a similar effect. As far as I know, it was invented by Graham in his map "The Charlie & Larry Express". This is what it looks like in the game: 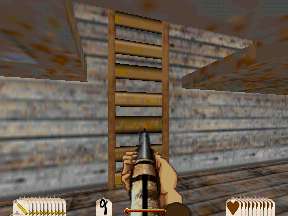 And this is how it looks like in Lawmaker:

Picture 1 shows the whole area we're talking about. The square sector is needed for the adjoin with the upper floor of the wagon. But what about that little subsector? If we have a closer look at it, we will realize that it's no subsector at all but a seperate sector (Pictures 2 & 3). When selecting the wall shown in Picture 4, we can see that it has an overlayed texture which looks like a ladder.

But why can you climb the ladder? Ol' Graham set the gravity of this little sector to 15! A normal gravity would be -60, but 15 lets you fly where no man has gone before! Thus you think you climb a ladder...

This tip doesn't really contain information on how to make custom weapons, but I try to explain how a weapon works in general. When I talk of weapons I'm thinking of shotguns, fists and rifles but not of the knife and the dynamite (they work a little different). But here we go:

Some weapons on my resources page are intended to replace other weapons, for example the cannon by TheOutlawDad. To make them work, you just have to give 'em the name of the weapon to be replaced, for example "igatgun.nwx". Now the cannon will appear whenever you select weapon number nine.

To build your own weapon you need at least two ITM and two NWX files, if you want to create your own ammo, two NWXs and ITMs more. To those who don't know: NWX and ITM belong together, the NWX contains the graphics, the choreography (and some more things I don't know), the ITM file contains sound used, behaviour and size of an object.

The following - let's call it analysis - focuses on a map called "Longbow", a custom weapon with custom ammo. You can find it in "Broken Treaty" (brtreaty.zip) at Pale's.

The first pair of ITM/NWX is needed for the ground object, that's the one lying around in the game. The NWX usually consists of one single picture. The ITM is much more interesting, here's an excerpt:

Again, Lawmaker's script-editor is very useful when editing these ITMs for it pops up windows where you can choose ammo, the handle and so on.

So, if you want to use custom weapons in your maps, you have to place the ground object somewhere, not the inventory object. Some of the weapons over there also contain regenerating items, they are intended for multiplayer maps. When using custom weapons, you should neither include the weapon that is replaced by your new weapons, nor use OLPOSTAL, for it loads the original weapons - and this might cause some grave problems!

The level (lvt) and object (obt) files Lawmaker creates, are in ASCII format. You can have a look at them in simple text editors (such as notepad).

The levels from Outlaws v2.0 (olpatch2.lab) were distributed in a special binary format. OZ_Raptor wrote a little tool to convert 'em back to ASCII.

Now, some mappers publish their maps also in that binary format, I always wondered how they converted them.

To convert a text file type:

The argument "/tokenize" causes Outlaws to create map.obb and map.lvb, the binary versions of your text file. The binary files are much smaller and thus load faster.

Be careful if your map is in another directory than the Outlaws directory. You have to type the directory name in the old DOS format, eight characters (e.g. "C:\LUCASA~1\TESTMAP\map.lvt")

The name of a level is determined in the header of its RCS/RCA file:

For a Historical Mission, you have to create only an RCA file with the title in its header as shown above; Outlaws will show the title.

For a Single Player Mission (appearing at "Main Game"), you need at first an RCS file. The mission is now already selectable and playable from Outlaws' main menu; but the title that is shown now is just the name of the LAB file. To make appear the title that you want, you have to create an additional RCA file with the name in it (just copy the RCS to an RCA file). Unfortunately, the level now appears in both menus.

So, it doesn't seem to be possible to show the correct title of a level in "Main Game" without showing the level at "Historical Missions" as well, for Outlaws takes the level name from the RCA.

Single player campaigns usually consist of several levels. I have been asked how they can be linked and published together. This is the usual way of publishing single player levels...

I assume that you have stored every level in a separate directory. First of all, copy all the contents of that directories into one new directory (let's call it the release folder). Create a LAB archive with ConMan (or laber, as you like it) and add all the files from the release folder to the LAB.

Note that if you use text files to tell the story of your campaign, they shouldn't be included into the LAB. Outlaws seems to need the text files directly in its folder...

Now you already have the first part of your release!

Now you need a story script. It tells Outlaws, how your campaign is called and which story texts and levels are part of your campaign.

A simple story script for a single player mission with one level and intro and outro texts could look like this:

For a series of single player levels, use a script like this:

Mappers usually add a text file to their distribution with some miscellaneous information, such as specifics of the level(s) (textures, objects and stuff), author infos, and credits.

You can get a template for such a readme right here.

By now, you can put the LAB archive, the story text files, the story script and the readme into a ZIP archive and send it in.

There's another possibilty to distribute a map; it's the best choice if you have a custom LOCAL.MSG (that's the file with all the screen messages) or a custom scrolling background for the story texts (like I did in "Aunt Rosie").

Therefore you put all your files (level files, textures, story text files and the story script) into your LAB archive. Rename the LAB to something like OLPATCH#.LAB, for example OLPATCH8.LAB. Outlaws will then think that your file is an official patch by LucasArts and load all its contents automatically.

The problem is that the number of patches seems to be limited. OLPATCH1 and OLPATCH2 are already used, a higher number than OLPATCH9 doesn't work. A simple but effective solution are batch files (as used originally in Fort Blood and copied by moi in "Aunt Rosie"):

The "pause" statement is needed, for Mr Windows launches "olwin.exe" somewhere in the background and continues with the batch file; it restores the original name long before Outlaws can see it.

A solution for this problem would be a seperate executable which calls the Outlaws application:

I wrote this originally for "Aunt Rosie", but would you execute a downloaded EXE file written by someone you don't know ???