This is an in-depth tutorial for newcomers to modding Airships. We are going to make a simple mod that adds a new kind of enemy to spawn in strategic mode, a peasant uprising. You need no graphical skills for this one.

This is an in-depth tutorial for newcomers to modding Airships. We are going to make a simple mod that adds a new kind of enemy to spawn in strategic mode, a peasant uprising. You need no graphical skills for this one.

In Airships strategic mode, there are lairs on the map that are periodically occupied by monsters, pirates, and other menaces. These are referred to as "monster nests". The types of monster nests available are defined in the game data files, and you can add to them by creating a mod. 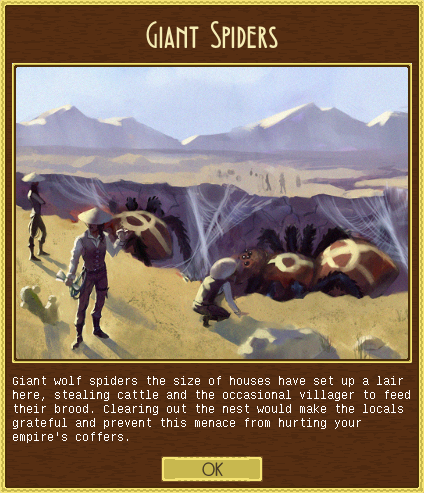 You can download the full mod from this tutorial here, for reference.

Finding your way around

To get started with modding, you first need to find two folders: the game install directory and the local AirshipsGame directory.

The local AirshipsGame directory is where the game stores user data, such as ship designs, saves, and also mods.

(~ is your home directory.)

In the install directory, have a look into the "data" directory. This is where all the game data is stored: module types, armour types, sounds, images. Mods override and add to this information, and use the same file structure.

Each type of information is stored in its own sub-directory of "data". Module types are stored in ModuleType, types of crew (sailors, soldiers, grenadiers, spiders) in CrewType, and so on. Even types of birds flying around in the background are listed, in BirdType - so if you want to mod in a new kind of bird, you can do that.

Since we want to create a new monster nest, we're interested in the MonsterNestType directory. Inside is a file called "nests.json", which contains all the nest types that are in the game by default. Most data in Airships is in JSON format. You can probably pick up how it works by looking at it, but you can also read up on its details here.

We're going to look at the information in a nest type in detail in a bit, but for now, note that each JSON data file consists of a top-level list [] containing objects {}. Here, each object is a type of monster nest.

Setting up the mod

So let's start creating our peasant uprising mod. Go to the local AirshipsGame directory, into the "mods" directory, and create a new directory called "peasant_revolt".

To make Airships recognize "peasant_revolt" as a mod, it needs to contain an info.json file. Create this file inside the mod directory, and put in the following text:

Here's an explanation of each of the elements:

Once you've created that file, you can start up Airships, and the mod will be recognized and loaded in. It just doesn't do anything yet.

The other piece of information the mod needs is a logo image. I wrote at the top that this tutorial needs no graphical skills, so how are you going to get that image? Simple: steal from the great masters of the past, who lived in an age before perpetual copyright. A quick Wikipedia search for "peasant revolt" yields this page and this image from 1470, which we can use for the mod.

Now it's time to produce the actual content of the mod.

Let's start out by creating the ships and buildings for the peasants. This peasant revolt is going to have a small headquarters, barely more than a shack, and field some very small and low-tech ships.

To create those, we can use the in-game editor as normal. Create a HQ building, something like this: 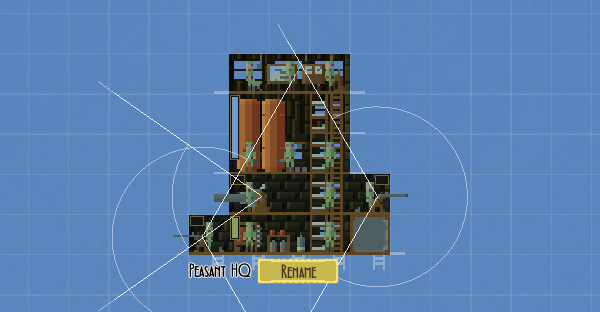 and save it as "Peasant HQ".

And then some very small and weak airships, like this: 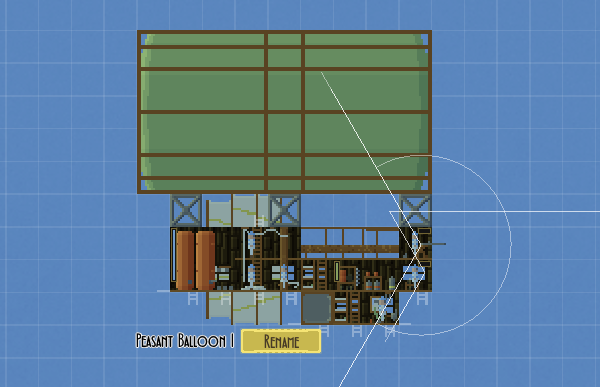 and save them as "Peasant Balloon I" and so on.

and some tanks, "Peasant Tank I", etc:

Now, go into the local AirshipsGame directory, into the "ships", "landships" and "buildings" subdirectories, find the saved constructions, and copy them all into a new directory in your mod called "monsters". This will allow the game to find them for use by the monster nest. 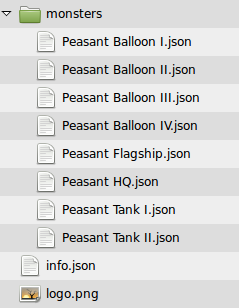 Now it's time to create the main piece of information in this mod: a new MonsterNestType. Create a "MonsterNestType" directory in your mod, and create a new file called peasants.json in it. Instead of typing out all the information for the monster nest, let's just copy-paste the one for brigands from the game data and adjust it. (The brigands nest entry is in "nests.json" in "MonsterNest" in the game data directory.) 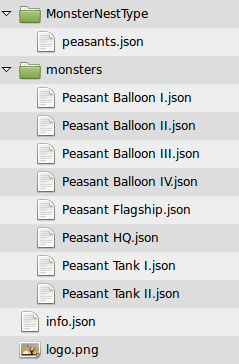 So to start out with, your file should look like this:

Note the enclosing square brackets: it's a list with one element, the "brigands" MonsterNestType. I will now go over each field and explain what it does, and how to adjust it for our peasants, then show the complete result of the adjustments.

So now your file should look something like this: 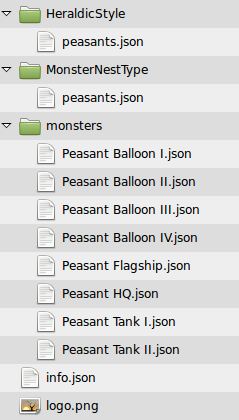 And again, we'll go over each field and adjust it as needed.

So now our newly created heraldic style looks like this:

The idea with the different heraldic styles is to give each kind of opponent a different visual identity. Lots of skulls and black and red? Pirates or brigands. Things from work and nature in simple colours? Peasants.

Now we're nearly done! There are two things remaining to complete the appearance of our revolting peasants: the image the player gets when clicking on the monster nest, and the text snippets about it.

First, the image. The game expects to find a 400x300 image of the same name as the monster nest type to illustrate the nest for the player. Let's again use the picture we used for the mod's title image, cutting out a suitable 400x300 area. Create an "images" directory in the mod and save the image as "peasantRevolt.png". 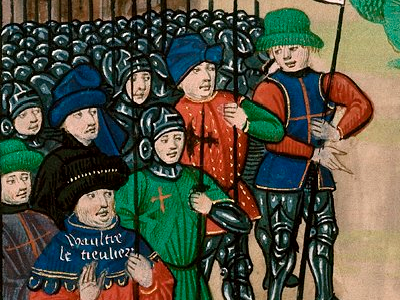 Finally, we need to create a file containing the text the mod uses. There's a gotcha here: in the game data, these files are in the "lang" directory, but in mods, they're in the "strings" directory. So create a "strings" directory with a file called "en.properties". This lets the game know that this is the file containing the extra English text for the mod. If you wanted to e.g add a French translation, you could also add a "fr.properties" file.

Properties files are text files that map the names of text snippets to the actual text. Each line starts with the name of a text snippet, followed by an equals sign, followed by the text snippet. The names of the snippets are automatically derived from the entries in the game. For the monster nest we created, we need the following snippets:

The {0} is a substitution syntax. The {0} gets replaced with the name of the empire that defeated the nest. Some text snippets get information like this substituted in. You can look at en.properties in the "lang" directory to see what kind of text snippet gets substitutions. Note that there must not be spaces between the curly brackets and the number.

The file format does not properly support single quotes / apostrophes. Instead of using one, use QUOTE in all-caps.

And now we're done! The entire mod directory structure should now look like this. The "generated" directory is automatically created by the game when it loads in the mod to store some extra information.

What remains is testing and fine-tuning.

You can start up the game again, and the mod should load in. If you create a new strategic game, the peasant nests can turn up. If you want to make sure that you can see some quickly, temporarily increase the spawnWeight in the MonsterNestType file to 1000, which means that almost all monster nests will be peasants. Just remember to reduce it back to 20.

If the mod fails to load, have a look at your files and check that they contain the same information as the examples. Check that the ships and buildings references in the monster nest are available in the "monsters" directory in the mod. A ship called "Peasant Balloon II" should have a "Peasant Balloon II.json" file. If you think that you made a mistake somewhere in your JSON, you can use JSONLint to check it through.

Once you are satisfied with the content and balance of your mod, you can upload it to Steam using the mods screen in-game, or export it as a single .amod file to import and share it on the forums.

This is only an introduction to modding. To figure out how to do more, have a look at the game data files and at other people's mods. I also made a short text tutorial on adding a weapon and an in-depth video one.

Try things out, experiment, and learn how to do cool new stuff. And if you have any questions, you can always contact me and I'll be happy to help. And if you found any part of this tutorial unclear or confusing, do also let me know, so I can improve it.