It has been far too long since the last news. The first announcement in the new year is a great opportunity for us to look back at what has been accomplished by the team in the past year and to slip in some new stuff which we haven't told you about before. Of course we cannot tell you everything but this announcement will be a long one so let's get started.

It has been far too long since the last news. The first announcement in the new year is a great opportunity for us to look back at what has been accomplished by the team in the past year and to slip in some new stuff which we haven't told you about before. Of course we cannot tell you everything but this announcement will be a long one so let's get started.

First off, 2009 has been a busy year. We have finished a number of parts which the final modification will be built up from and are progressing fast with many more - but it is not only the game that has undergone many changes, our team has done so as well. This is why we would like to list our new team members before the main content of this announcement begins.

Now on with the actual news. We have already released information about some of our features, examples being a completely new map with over 190 sectors neatly integrated into the lore of the X-universe, a custom difficulty system allowing players to adjust various difficulty settings on the fly, completely reworked weapons about which you will be informed more later in this announcement, and a new factory size (XXL) which enables you to build complexes with higher productivity while using less factories, thus resulting in a performance gain. Those are just a few of the features that will be in the final mod, and in this announcement we will inform you of a few more of those features.

Let's begin with the foundations of the mod. One of the main reasons why the development of X-Tended - Terran Conflict takes quite a while is because we approached the modification with a different mentality than with the original X-Tended Mod. We didn't limit ourselves to expanding the game (although this is of course still a major part of the mod), but decided early on to rework the very base structures of the game. An example for this would be that we didn't just add new weapons - we reworked the whole weapon system and implemented a new structure into it - the result is that we were able to neatly integrate 31 new weapons into the game, raising the amount of weapons to 61 in total.

TShips has received a similar treatment and so has TShields, resulting in the addition of military shields for each shield type. As you may have guessed a number of further basic files have undergone and are undergoing reworks. These basic structure changes provide us with more possibilities in balancing and introducing more variety into the game, which in the end will result in the game being more enjoyable for the player.

There have been further changes to the game which cover a different area but are just as basic. A good example of this is the custom difficulty system mentioned in previous announcements. This pulls together a number of different background systems into a simple to use menu, which allows the player to change some of the very basic behaviours in the game depending on the difficulty level specified. One example of this is the XTC bailing system, which will (in combination with the difficulty system) allow the player to specify the bailing chance for different ship types in percentages. The custom difficulty system also uses new equipment libraries designed and built by the team which will equip NPC ships with different load-outs based on the difficulty specified, the race of the ship, and the class (size) of the ship.

Full size images in the image band/viewer/ribbon/whatever you want to call it ^^ above: 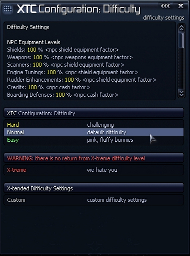 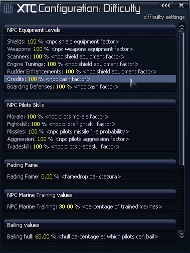 Of course scripting work is not limited to the custom difficulty system alone. Some of you may remember the Goner Mobile Shipyard (GMSY) from the original X-Tended Mod, while most will know it under its Terran Conflict name - "Aran" (the ship that can be found in the unfocussed jump drive sectors). In XTM, it had the ability to build ships much like the player HQ, and this will again be possible in XTC; But we didn't stop at that. Of course the Aran is a possibility for the player to build ships and thus an alternative to the HQ, but a Mobile Shipyard is very special and will be limited - so we took it a step further. In order to increase your ship production, you will be able to obtain your own shipyards! 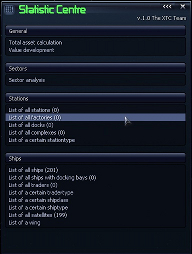 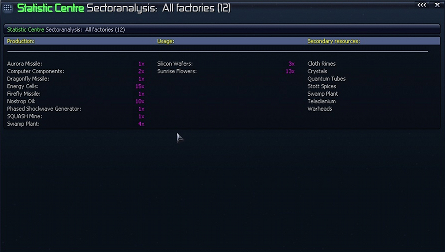 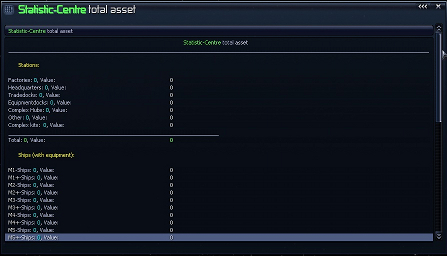 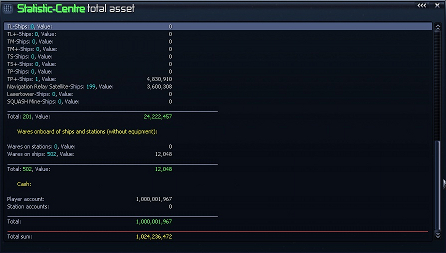 There are a number of further features on the script editor side which we would like to mention, but we have managed to restrain ourselves and we will cover them in later news posts.

With two new mission director coders joining the team, you are probably asking yourself "What is going on on the MD side?". "A lot." is the answer. For XTC, all generic missions have been adjusted and rebalanced. This was achieved by attacking the MD with the same mentality as described before: Changing the base structures. The MD also has basic libraries (like the 'Opponent Balancing System' library, or OBS for short) and these have been adjusted and partially rewritten for XTC, providing us with far more control over the system than would have been possible had we used the default structures provided to us in TC. Of course this is not everything that is happening in this area, XTC will also feature a number of new generic missions introducing some more variety into the game. Also as no vanilla plots will be available we are working on our own plot which will serve as an introduction into the setting of the modification. More about this later.

A major part of any of the larger mods is the visuals; It was the case with XTM, and it will be the case with XTC also. The Terran Conflict forum has seen a number of modifications improving and changing the visual quality of the universe before. Some eliminated the 'sector fog', some increased the viewing distance, others concentrated on sector backgrounds creating them from telescope pictures, and some even painted their own backgrounds. Not wanting to buck the trend, XTC will feature a number of completely new backgrounds with the same, if not better, quality than the original ones. 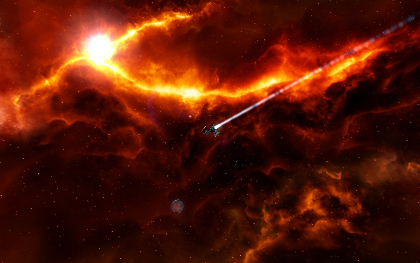 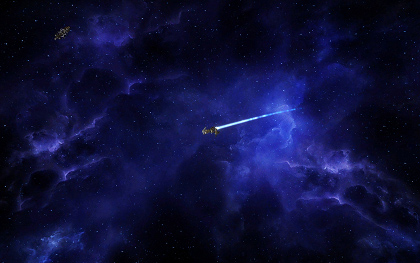 Of course improvements to the map weren't limited to that, as you may have noticed from the screens released so far planets have also received various visual improvements.

Many of the XTM veterans will remember the mighty M0 class: The Argon Leviathan, the Paranid Olympos, the Terran Valhalla, the OTAS Castrum, and the Sohnen Incubus. You will encounter the M0 class ships again in XTC, although they will not be as strong in order to maintain balancing. Now the XTM M0's are not anything new to all our veterans, so here is something to whet their appetites: The Split now have their own M0 - the Taipan. 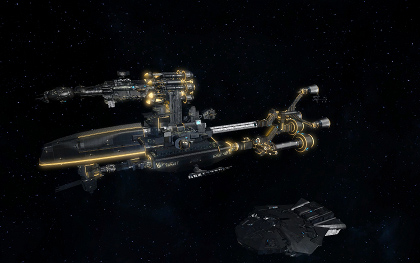 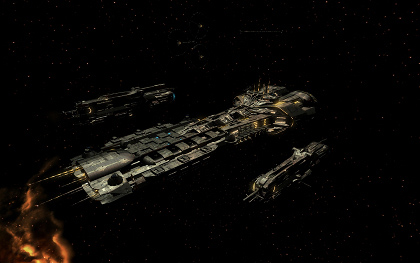 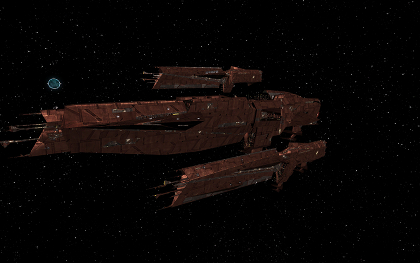 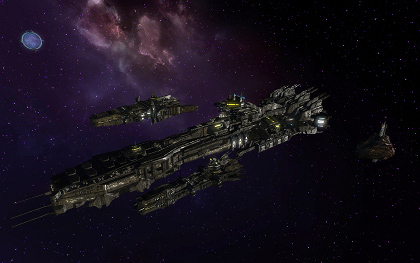 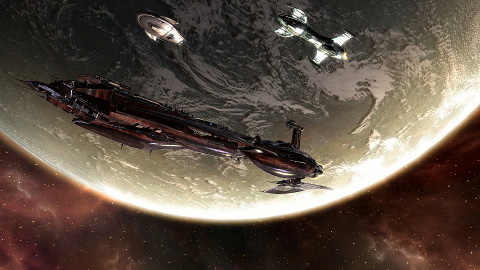 Work on our OST is progressing well. We already have a number of new soundtracks finished and more are work in progress. Another part of the work in the sound area is sound effects, which includes weapon and explosion sounds. Those 31 new weapons need new sounds, and so there's a lot of work to do here as well.

Finally it is time to introduce you a little more to the setting of the modification. One of the - if not the - main principle of XTM was that everything which was added had to fit into the existing lore of the X-universe, the same is true for XTC - There will be no dimensional rifts opening up gateways to the Star Wars or Star Gate universes in X-Tended - Terran Conflict. A lot of time has been invested in creating a new scenario for this modification which allows for a new map and can still be integrated into the lore known from previous games and books. In brief, XTC is set after the events of Terran Conflict and the Aldrin Expansion Missions. The mod takes up the story thread left by the end of TC's main plot: Aldrin has been re-discovered and connected to the universe by a pair of terran gates. In XTC this process has continued, using Aldrin as a jumping off point, old gates have been found and re-activated within the old gate network. XTC begins three years after Aldrin has been re-discovered, and in these few years the situation has changed completely. Whether that is for the better or for the worse you will learn about in due course. 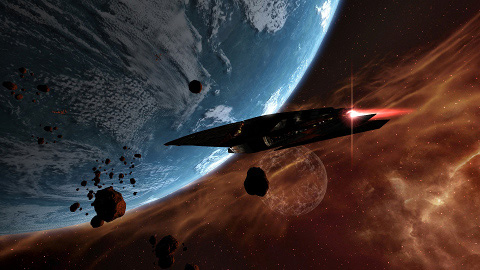 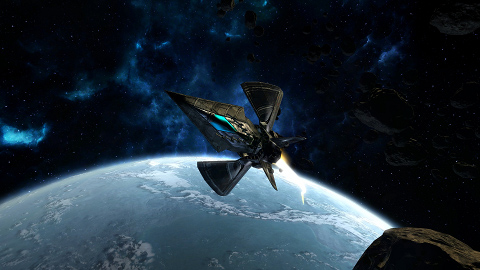 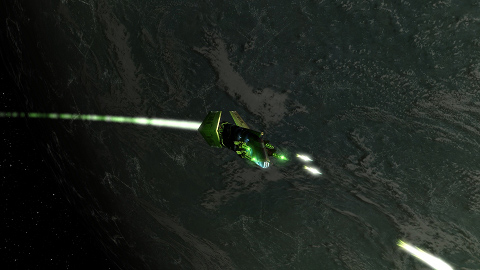 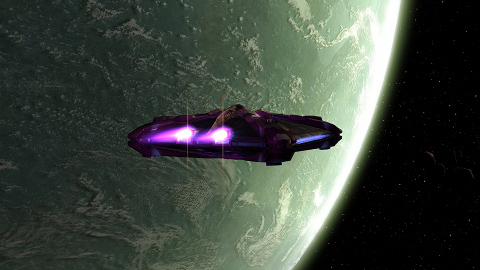 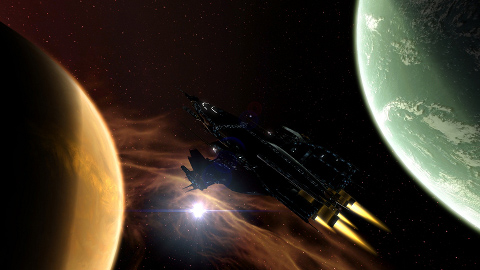 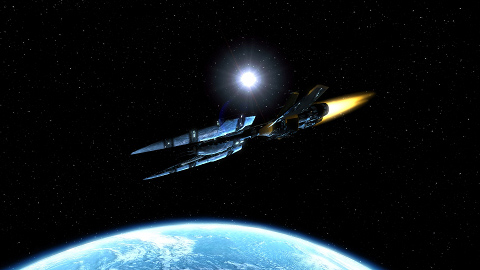 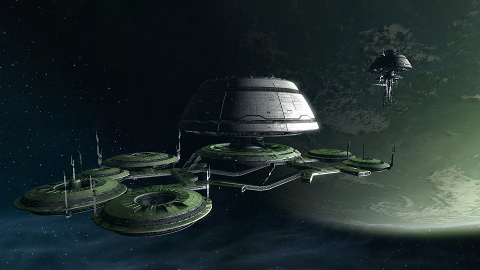 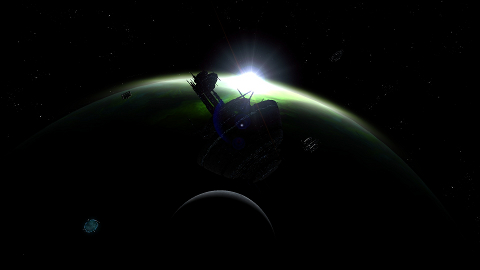 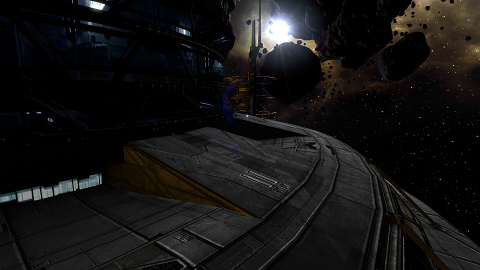 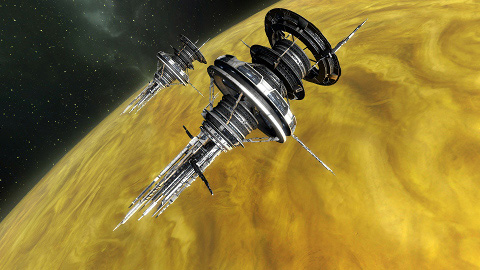 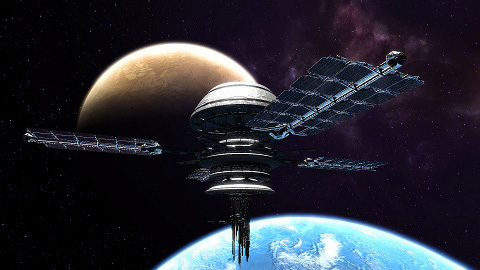 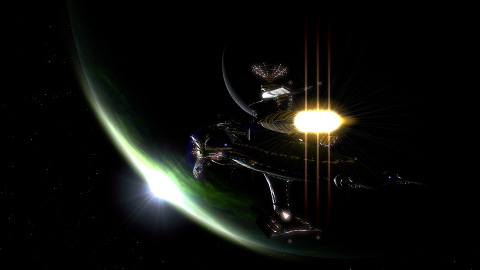 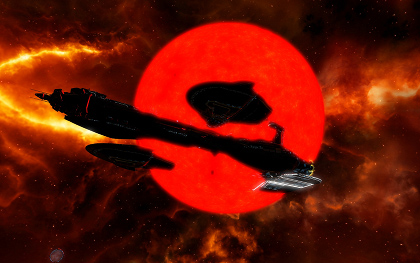