I have been porting my Mac/PC game Pawns to the iPhone, using Unity. So far I have beefed up the original proof of concept with new puzzles, new pieces, a face lift, and improved performance.

Pawns began existence as the 2nd place winner of the Original Mac Games contest in 2005, written with Unity. (This version for Mac and PC is available on my website.) I had always enjoyed designing puzzles for LucasArts' game Pit Droids, and my goal with Pawns was to borrow the basic mechanic while using puzzle elements of my own invention to avoid making a derivative game. The game of chess gave me both a theme and various pieces whose behavior was already known to the player. 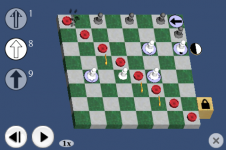 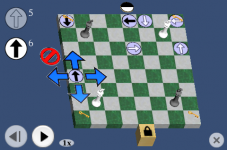 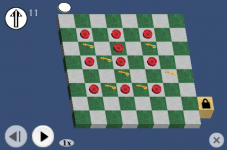 Recently I have dusted off the game with the goal of porting it to the iPhone. To date I have accomplished the following:

I am looking forward to posting new updates to IndieDB as the game nears release.

I definitely wanted to comment on this, as I have to commend you on taking something commonly well known and adding an interesting spin to it. That's always very cool to see in game development.

Thanks! Hopefully it'll be fun to play too. :-)