Post news RSS Without Combat, What Do You Do?

What do you do in a game where there are no enemies? Why is that even a sensible question?

Posted by DannyWeinbaum on May 1st, 2015

I’m not saying there isn’t innovation left to be done inside that box, or that I think people should stop making these kinds of games. Combat is human, and its an engaging subject to make games about. But there are other aspects to humanity that we can explore through games. I have nothing against dude-killing games, but I do think its odd how many game designers seem to only think inside of that particular box. There are certainly many genres that typically don’t involve combat, but when I describe Eastshade as a single-player, first-person, open-world game, people usually think Role Playing Game. And everyone knows that the particular role you play in a Role Playing Game is the role of a hero. And everyone knows that heroes live primarily in worlds where 90% of the population are wandering bandits waiting to be killed. 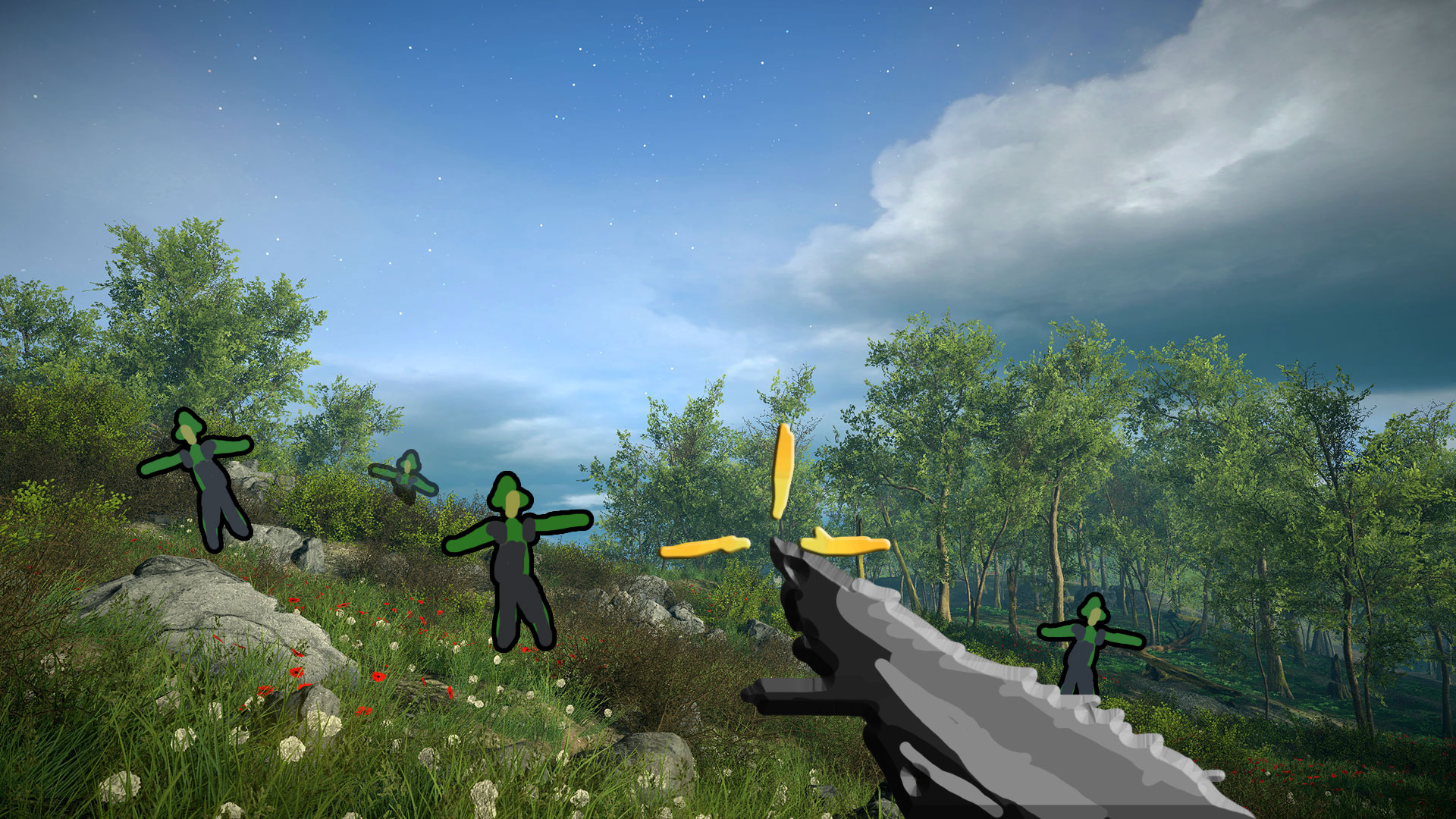 So will Eastshade be any good? The game has changed a lot from what I initially set out to make. There used to be survival mechanics, which gave people something to grab onto when trying to understand what the game is (courtesy of Minecraft). Those mechanics are gone now. So what’s left? If I said its like a first-person, open-world adventure game it wouldn’t be totally off the mark. But the state of a traditional adventure game’s world is completely dependent on the player’s state through the game. The guard won’t move from the door until you do some absurd chain of lock and key puzzles to make it happen. Eastshade goes on without you, and the feedback from the world is more systemic, predictable, and granular.

What if I put it to you like this: Eastshade is not a game that you play, but rather a place that you go. There are daily solar and lunar eclipses, the conifers are purple, much of the architecture is spherical, and the people look like monkeys. Stuff happens. Do you want to visit?

So it's basically exploration. You walk around in Eastshade, staring at the sights and watching stuff happen?

Man, I've been waiting for a long time for someone to make a game like this.

The world also responds to you in a lot of ways. You can make a big impact on the people there.

There are people?! (even if they look like monkeys) Too bad you don't release more periodical article updates showing off the world. :P

Also, you said the world goes on even if you don't interact. How do you manage that when the player is far away from a place that would have "stuff" going on? Are they timed? Because dynamic events would require the player to be near them no? Anyways, this is one of my most looked-forward to updates here! Cheers!

I'm constantly conflicted with how much to show because I don't want to spoil things for potential players. Its so much cooler when you stumble across things in the game and are seeing them for the first time. Even the things I could show would be better if I showed them later, so its hard for me. However, I know that no one will care about this game if I don't show the goods, so at some point I'll have to open up a bit. I think that point will be when I have a trailer. In the meanwhile I'll try to post more technical posts and opinion stuff. Thank you for sticking with me!
As far as the world existing without the player, NPCs have lives and schedules (like Skryim). NPCs can talk to eachother as well. There is a night/day cycle and there will be random weather events.

I'm glad the survival mechanics are gone. I just can't get into "traditional" survival games, but I've had my eye on Eastshade because it's captivatingly beautiful and a place I want to explore, to sink into, to admire the view and poke around and find surprises.

Thanks Danny. Keep up the good work!

Thanks for the encouragement! I hope to surprise you a few times.