Introducing Tower Rush, a unit recruitment fantasy tug-of-war that pits you against waves of incoming enemies. Destroy the enemy towers before they destroy yours in this action-packed medieval fantasy action game!

Tower Rush, a unique unit recruitment battle game that offers you a vast number of choices and decisions as you play to build up a mighty arsenal of units and Guardians to defend your towers from many powerful enemies! 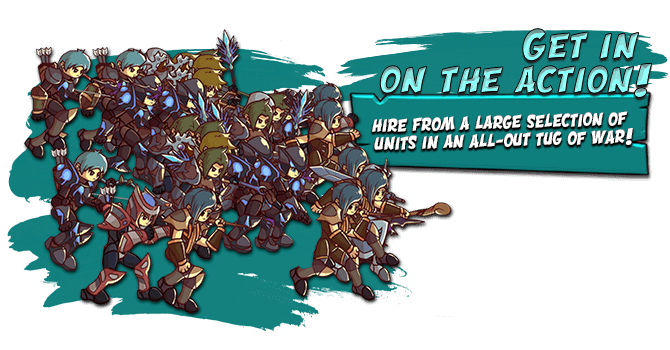 Set in a fantasy world made up of vivid landscapes, you will have the chance to battle through different environments, each with their own unique set of monsters.

Battle through a village setting, cross over deserts and endure sandstorms, brave the heat of volcanoes, tunnel through the darkness of catacombs, traverse through the winter winds, fight through thick forests, and much more!

Tower Rush is made up of regions that are unlocked by earning the minimum stars required to gain access to that region. You can always revisit previously defeated stages that did not net you enough stars to complete them again and add to your star total.

In addition to the vast number of stages to conquer, you will have your chance for glory in the Arena! The Arena is off-limits until you reach a certain player level (currently set at 10 but that number may change in the final release).

The Arena has randomly-generated enemies that appear in waves. Clearing out one wave may send out the next wave or present you with additional challenges to overcome. Each new wave you enter will bring forth harder enemies to defeat. The higher you climb in the Arena, the greater the rewards you are given as well! If you find yourself struggling in the Arena you can always revisit it after gaining more levels in the world.

You begin the game with four class-specific units in your control (warrior, support, spellcaster, and archer) and gain many more as you progress in the game. 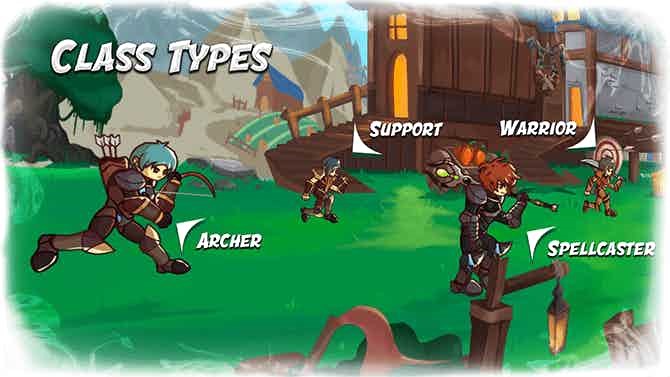 A unit's contribution in battle is measured by that unit's influence. The influence a unit has is just a measure of its combined health, attack, armor and other attributes that helps you understand how powerful a unit is in comparison to other units or enemies.

Once hired and in play, each unit will have a specialized ability that will trigger based on either chance or cooldown. When triggered, a unit will automatically cast or perform an ability (more on abilities in the infographic below!).

You can recruit units with gold acquired during a stage. Units will spawn immediately upon being hired and make their way from your towers (left side) to the enemy towers (right side). Each unit that you hire will count towards your recruit limit as indicated by the unit cap meter. You begin each stage with a recruit limit of 5 units and can increase the limit by paying gold earned during the stage. Each subsequent recruit limit increase will cost more gold than the previous.

Units do not have cooldowns after being hired, however you will be restricted from hiring a unit if you don't have enough gold or a game event is preventing you from hiring (such as the enemy acquiring the Favor "Inhibit Forces" - more on Favors below).

As your units make their way towards the enemy, they will automatically engage them with auto-attacks, spellcasting and other abilities (if they are able to). When a unit dies, they will free up a slot on the recruit limit cap and allow you to recruit more units.

Tower Rush has RPG-based levelling mechanics where you gain experience and gold as you slay enemies in battle.

When you acquire enough experience as indicated in the player experience bar, you gain a player level. Your player level reflects the level that your units and Guardians are as well. This level-scaling mechanic we have integrated into Tower Rush allows all of your units to remain viable for longer periods of time as you progress in the game.

Eventually, however, you will need to hire stronger units to withstand more difficult enemies. Each class has a rank I, rank II, and rank III upgrade of that class.

Guardians are enhanced versions of units with four distinct abilities and greater health, damage, armor, and speed than normal units. Guardians behave as your army’s powerhouse as they slice through enemies with greater ease and propel your forces much quicker towards enemy towers. You may select only one Guardian at a time to join your units in battle. You can switch to a different Guardian at any time at the home screen.

Unlike units, a Guardian begins on a large cooldown at the start of a stage. They are free to recruit after the cooldown expires but will have a slightly longer cooldown each time that they die. Guardians have four abilities that consist of three ranks each.

Start off with selecting a Guardian to join your forces and three ability points to distribute. You gain more ability points as you clear stages. If you want to swap Guardians you can do so at any time outside of battle, and you can re-distribute your ability points by paying a small reset fee (using gems earned in the game) to do so!

Income (gold) is earned automatically with each passing second of battle. Slaying enemies will provide you gold coins which also increases your income as well. The higher the enemy level, the greater amount of gold you can expect to receive from it.

Tower Rush provides the option of manual and automatic camera panning depending on your style of play and can switch between the two at any time!

Auto-Pan will shift the camera’s perspective to the unit you control that is furthest in battle (furthest to the right), while manual pan allows you to control the camera movement using A / D keys or left / right arrow keys.

Keeping your towers in good shape should be your main focus in Tower Rush. Avoiding enemies from damaging your towers is crucial to your success. Towers will shoot arrows or projectiles at approaching enemies and can be enhanced in various ways – upgrading them at the shop or through Talents or Favors, to name a few.

We plan on adding more tower types for both player and enemy as the game develops further.

The perils you will face in Tower Rush are vast and unrelenting. You will need to adjust your tactics constantly as you decisively handle each of the game's challenging enemies. You’ll find a large number of melee and range enemies, some of which have devastating spells and abilities that are sure to have you re-think your strategies for domination! 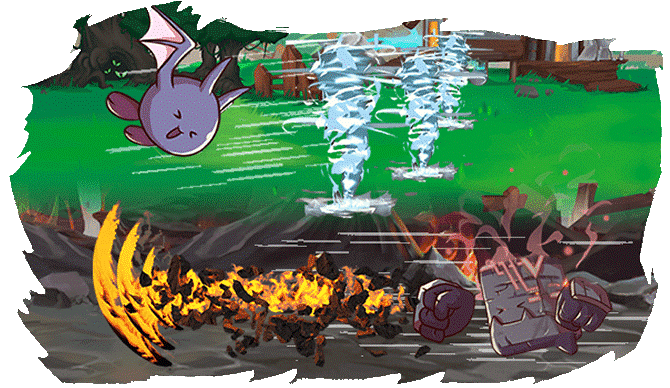 Each stage will present itself with at least one Threat and multiple enemy types to defeat before you are able to advance to destroy the enemy’s towers. A Threat is much more powerful than a normal enemy and is able to wipe out many of your units with ease if you are not prepared for it!

The unit-recruitment experience is enriched in Tower Rush with the addition of a Favor system, which basically grants a unique, powerful modifier to the side that is dominating the battle. To gain a Favor, you must have at least one unit alive and to the right of the stage’s half-way mark. If you are able to maintain that position and grow your Favor meter to full, you are awarded with one of three random Favors to choose from! As soon as either side’s Favor meter is filled, both meters are reset and begin to fill again. 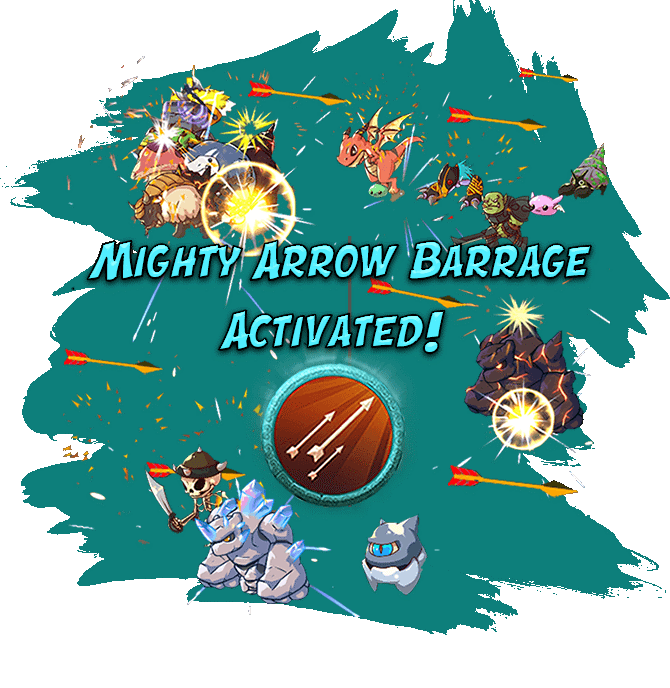 Once a Favor is earned, you can choose to use it at any time, as long as it is still available to you (if your Favor meter fills up again back to full, any existing Favors you have are replaced with another set of three random ones).

Purchase items from the shop using gems that you’ve earned from Achievements or other means. You are limited to storing 8 items at a time but you can hold multiple quantities of the same item. Once consumed in battle, an item goes on cooldown before it can be used again.

Enjoy a large selection of potions that heal your units, increase their physical or magical damage, attack speed, and much more!

The shop will also have weapons and tower upgrades to purchase as well.

Note: Tower Rush will not have microtransactions or other pay walls of any kind!

When you complete a stage for the first time, you’ll be able to choose one of several randomly-generated Talents to permanently acquire. You will have a choice from one of three normal Talents and one gold Talent (a gold Talent will be displayed as a choice if you already have the normal Talent version). A gold Talent is the enhanced version of a normal Talent and choosing it will replace your normal Talent with the gold one.

At this point in time, Tower Rush has 100 Talents to choose from (50 normal and 50 gold) with more to arrive as development continues!

Tower Rush is packed with Achievements to discover and earn! With 80+ Achievements currently in the game (and Steam-integrated) with more on the way, you can bank on being rewarded for various accomplishments throughout the game. Some achievements require that a task is completed a certain number of times, some may ask that you accomplish a feat, while others are more mysterious in nature.

Unlike the penalties incurred from being defeated in a stage (you lose all experience gained for that stage when defeated), Achievements have a “rolling progression” and are not affected by a defeat. That means you get to keep what you’ve accumulated/earned every moment of game time!

As you defeat stages in Tower Rush and increase your player level, your units and Guardians become stronger as well. You can venture into the Arena to find out how long you can put up a fight against devastating contenders such as the Berserker, the Shaman, and many more!

Dive into a view of your performance with an easy-to-digest stats screen! Some of the information you’ll find here include: which unit you recruited the most, how much you’re spending in shop visits, and much more!