Posted by AnvilGameStudios on Dec 24th, 2020 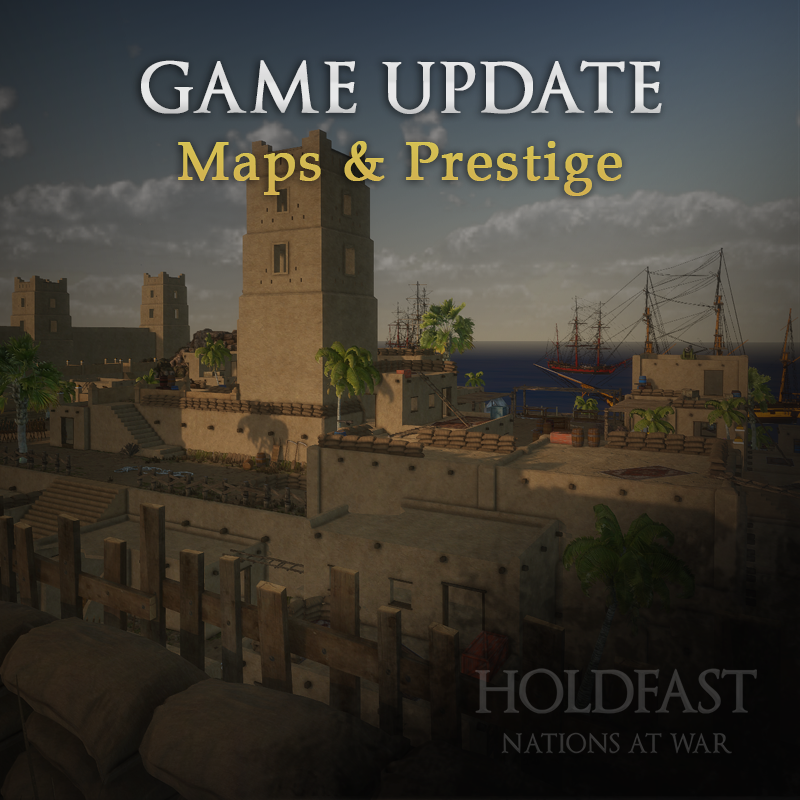 So shoulder your musket and sit by the fire while you take a read of what is coming to Holdfast: Nations At War this Holiday season! Don’t forget to clean the chimneys and prepare a cup of hot milk and cookies for the ‘man in red’ to drink though. 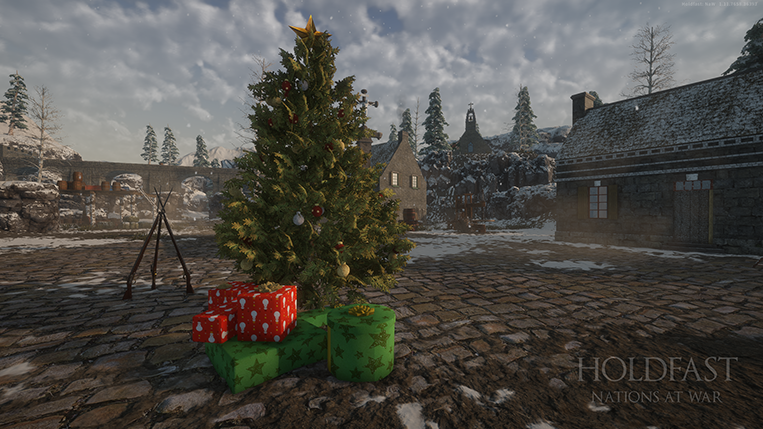 Expanding upon the game’s regiment registry system, regiments are now able to prestige should they reach the new rank limit of 70. It will be possible to prestige your regiments through 3 additional ranks once you have obtained that level.

Of course, as fitting for the time, there will be a special way to recognise regiments that manage to achieve such heights in the form of shiny new decoration around your regiments banner both in the registry and in-game. You can take a look at these decorations below.

Additionally, the curve for collective experience required has changed, this may mean your regiment’s level has also been altered but the experience gathered has remained the same. Be sure to capitalise on these new features and changes as Holdfast official servers will boast an increased XP weekend starting Thursday the 31st of December 2020 and running until Monday 4th of January 2021.

Congratulations to the [45e], BB and KRA for reaching the maximum legacy regiment rank. Let’s kick this new year off with a bang! 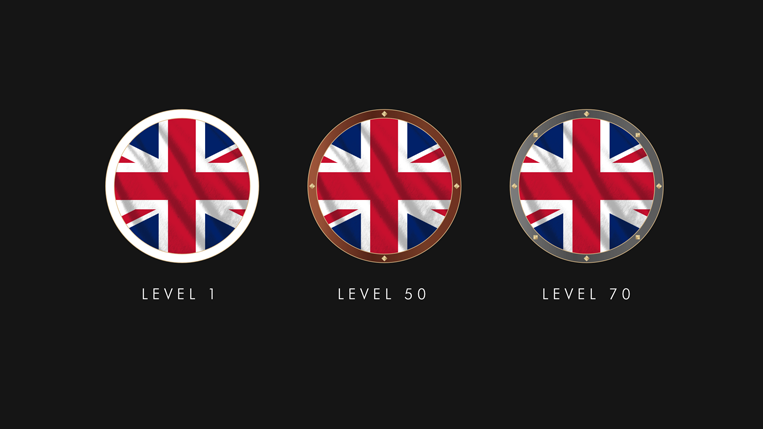 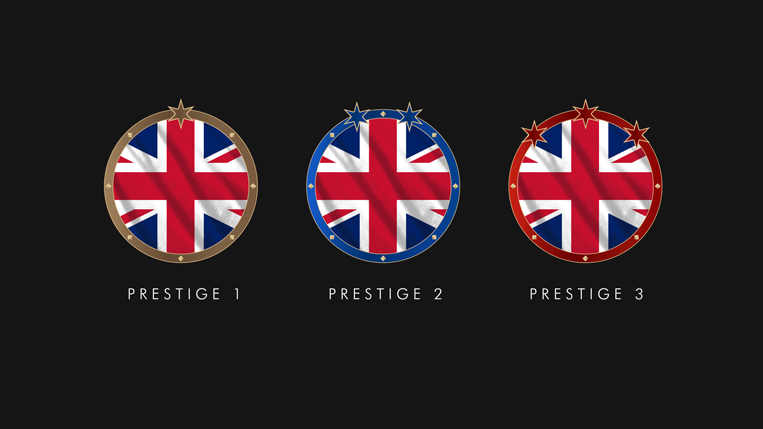 It is not just the regiments who will be able to showcase their brilliance with new decoration, the individual soldier rank limit has also been increased from 50 to 75! To go with this change a set of brand new medals have been introduced for dedicated fellows to achieve and showcase their hard work in all its glory.

Correspondingly, all of the soldier rank medals have been redesigned and altered to fit the new design of the new - Valour Medal. 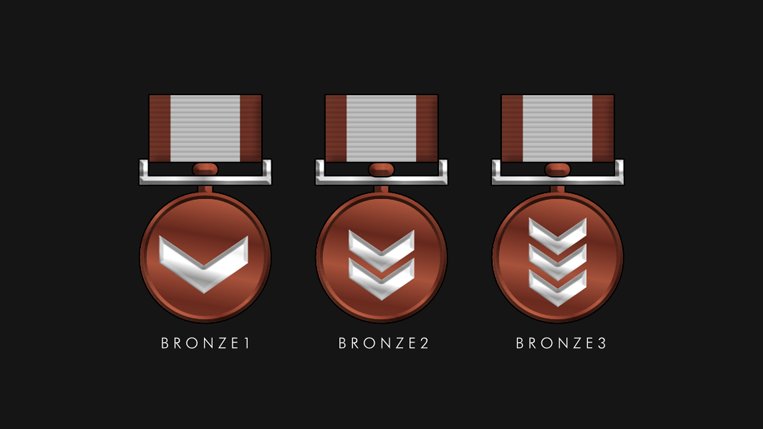 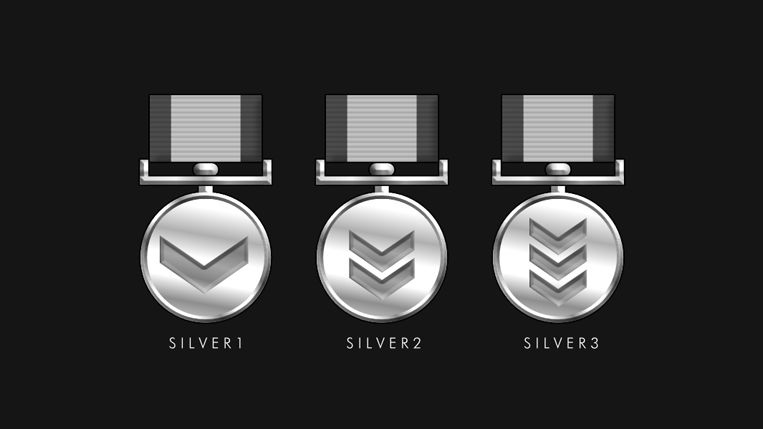 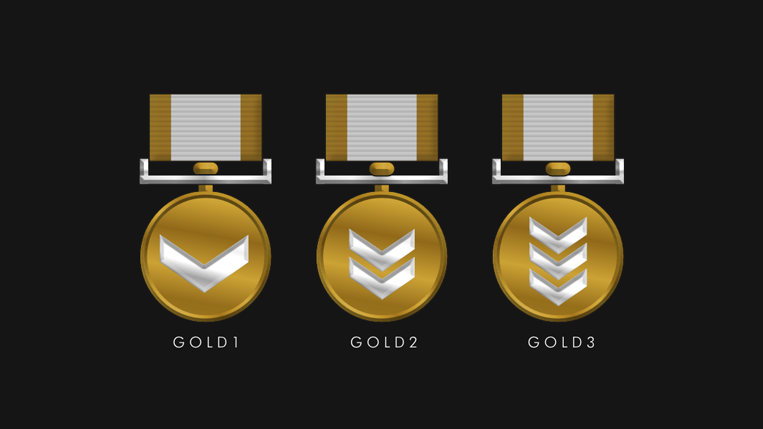 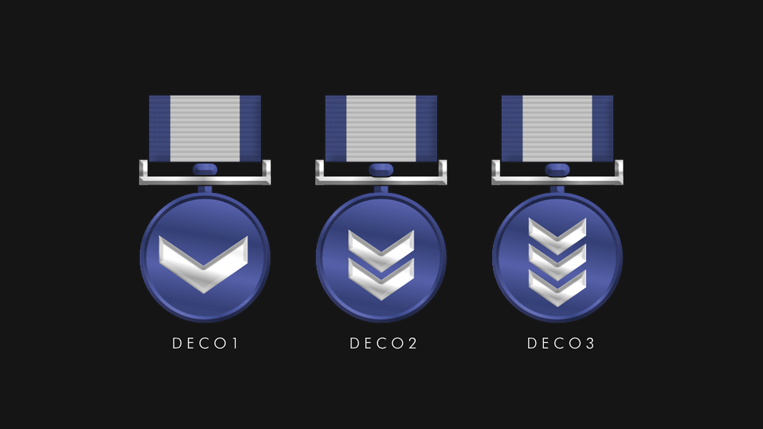 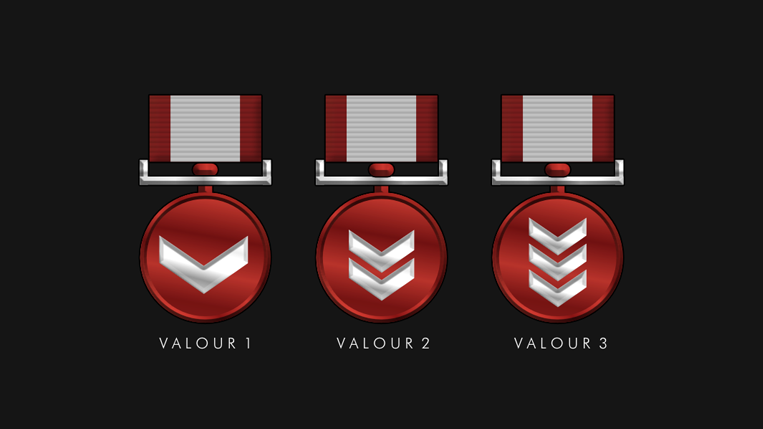 The Old Guard Joins The Fight!

There will never be any content outside that of purely cosmetic items packaged in a DLC. As we’ve previously promised, it doesn’t and never will impact gameplay.

Through these DLCs we can continue supporting 'Holdfast: Nations At War' while remaining totally independent and not privy to any external influences. It’s been like that since the founding of the team and we plan on keeping it that way.

It'll also help us fund damn exciting future projects which stay true to Holdfast and everything that makes it brilliant! 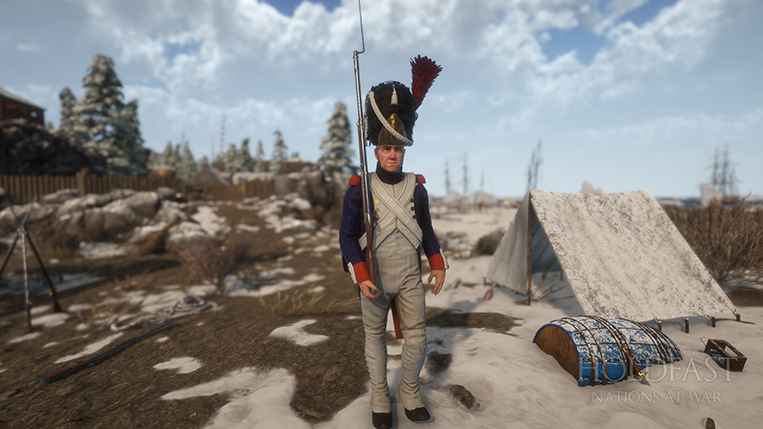 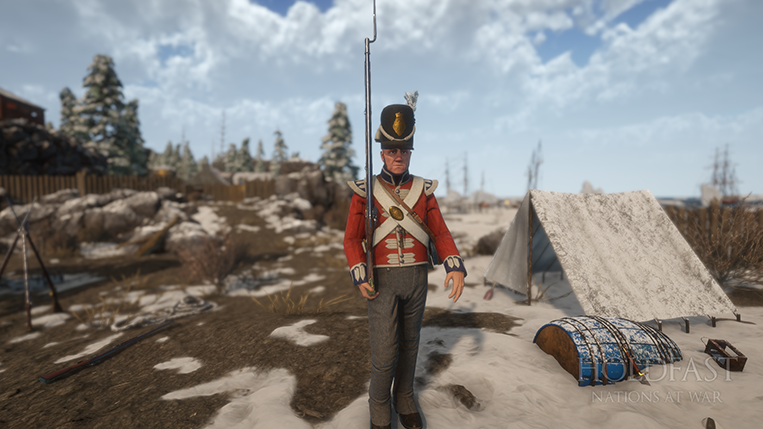 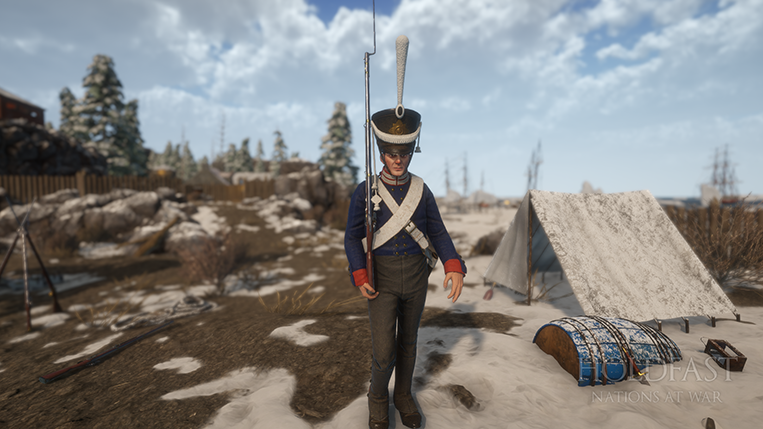 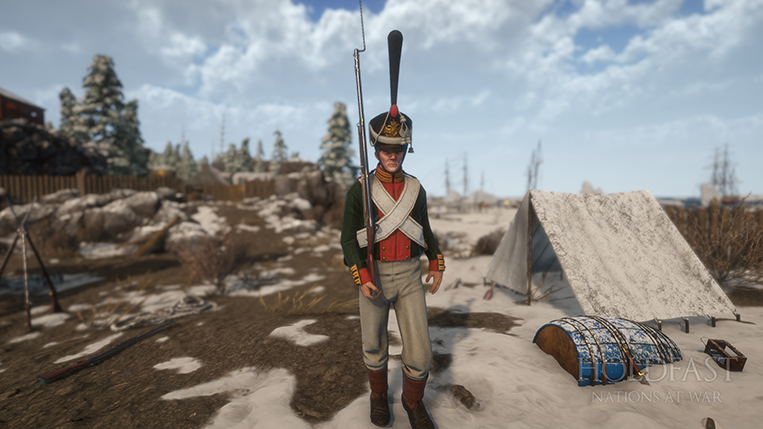 Of course, we couldn’t just introduce the new prestige system, soldier ranks and dashing guard uniforms without also featuring some new battlefields to enjoy these new features to the fullest!
This update sees one new Army Siege map created by Storey; Fort Al-Farid and two new Army Battlefield maps by Harper; Glacier and Port Nile added to the game and playable now on official game servers.

Fort Al-Farid
Fort Al-Farid is a desert fortification and spiritual successor to recently added map Fort Darial that is a favourite among many players. Al-Farid puts attacks up against not only a formidable stronghold but also the blazing sun and heat of the desert. Refill your canteens in the sparse oases and clear any sand jamming your musket, as breaching this fort will be a sweltering task. 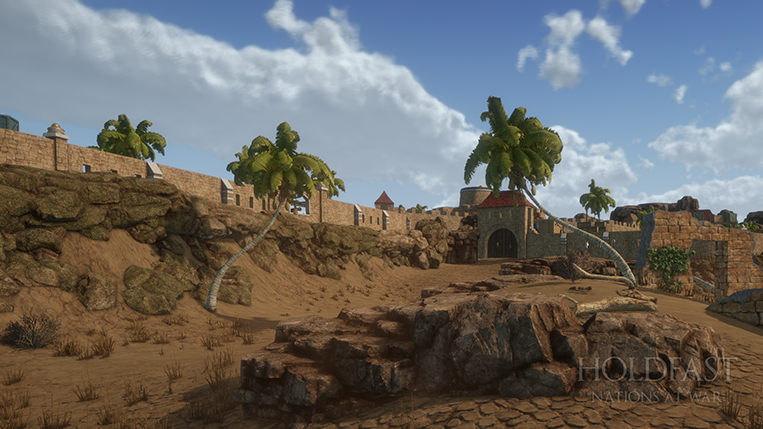 Glacier
In contrast to the sweltering heats found on Fort Al-Farid, Glacier is a cold, frozen battlefield that sees players battling over a small port town that has had its port frozen over. Tread carefully on the port's ice as at any moment it could be struck by a cannonball plunging you into the hyperthermic temperatures of the deep. Rankers who prefer the safety of land can find refuge from the blistering cold winds in a repurposed cave that overlooks the town. Be sure to take your musket with you however, as this will certainly be a point of contest for both armies as they seek shelter. 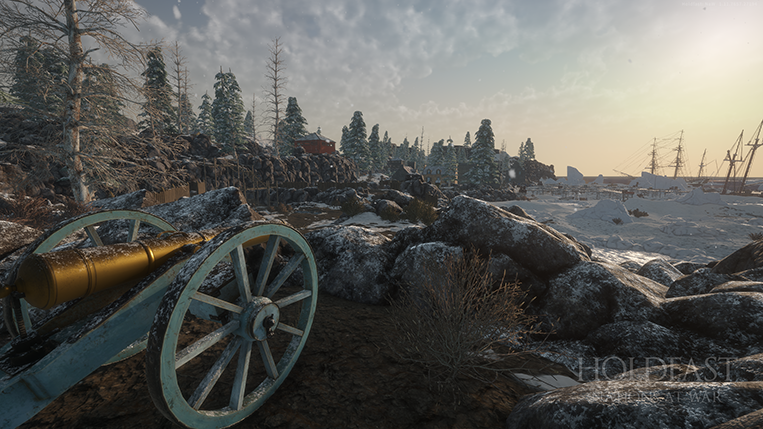 Port Nile
Unlike the frozen port of Glacier, Port Nile is a warm, tropical and rich city port that provides an urban battlefield experience that has yet to be seen in Holdfast: Nations At War. The narrow streets of this port and market city places infantrymen in close-quarter engagements that require quick thinking and flanking via ladders, rooftops and alleyways to gain victory. The multiple sections of the city, that vary in height, will put soldiers used to fighting in open fields to the test. 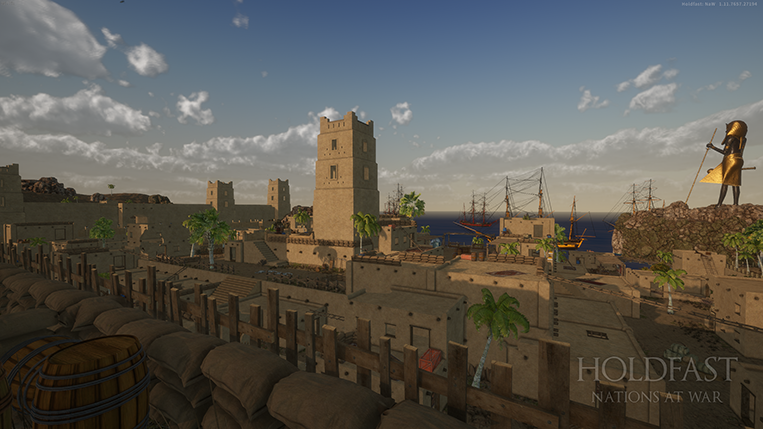 With the success of the Battlefield Forger contest and the rise in the Holdfast: Nations At War modding community this update also includes the ability for community servers featuring modifications that alter the typical gameplay experience to be featured alongside official game servers on the lobby browser.

The featured status will be awarded for a limited time to well managed and put together servers that offer new experiences for players who may perhaps wish to try their hand on them.

We hope this will encourage community servers to strive to create new game modes and experiences with the Holdfast SDK tools and server configurations for all to enjoy. It is only fitting we feature those who put back into the game with their own unique take. 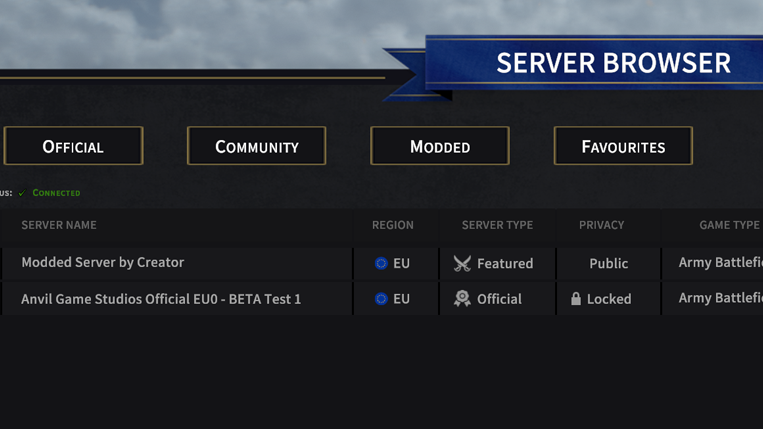 Should these new additions to community servers inspire you to get involved in the modding community please do not hesitate in acquiring the artisan role in the official Discord. This will give you access to various text channels dedicated to modding Holdfast: Nations At War.

To acquire this role simply visit the #getting-started modding channel and press the reaction emoji below the post. This will assign you the artisan role and give you access to all available modding community channels.

If you have yet to join the official Discord why not do so now? It is your central hub for all things Holdfast, not just modding but a plethora of channels dedicated to event and game announcements, regiment recruitment, game support, suggestions, history discussion and more. Click below to join today! 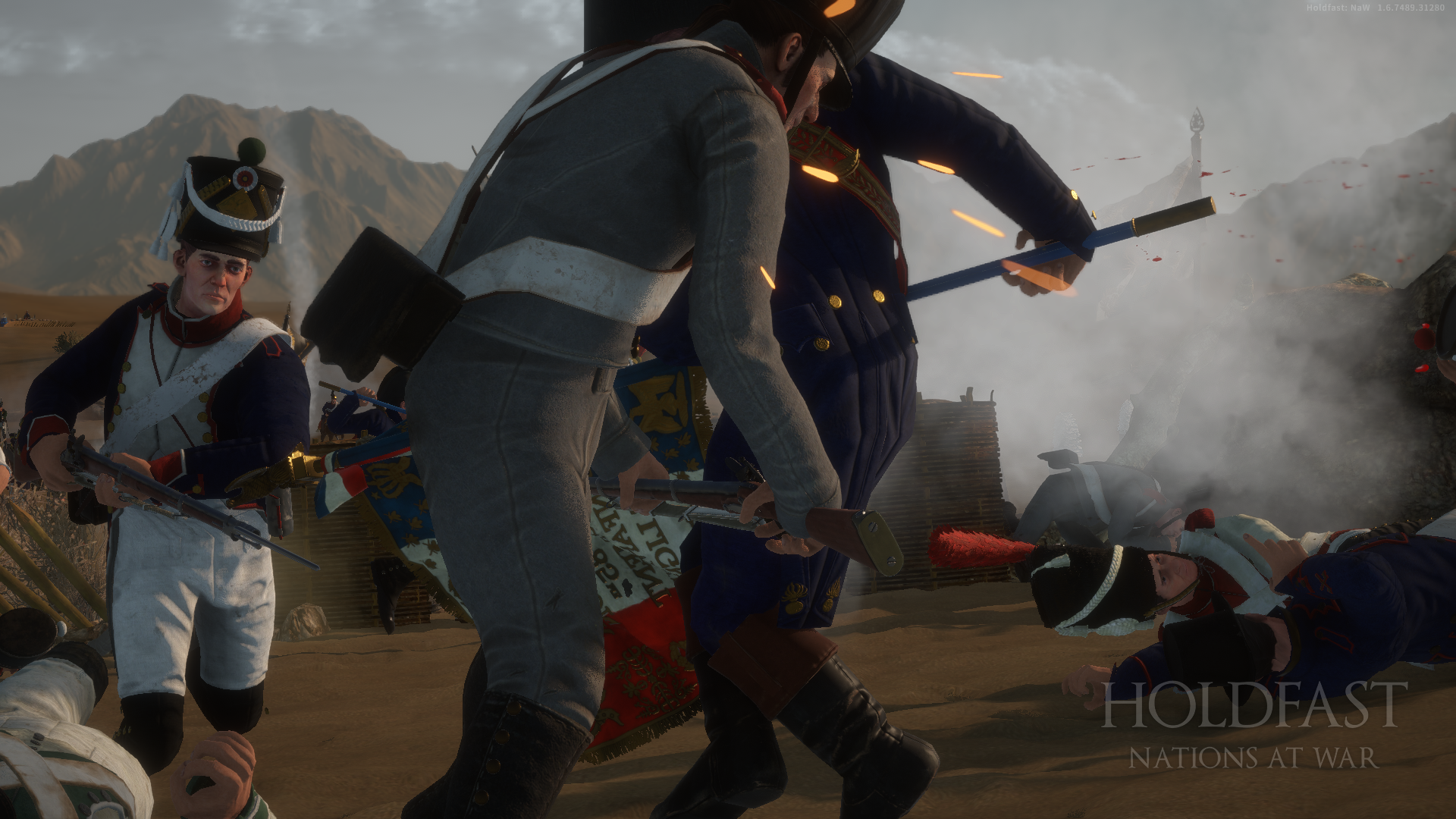 Here’s a list of all the changes, additions and bug fixes you’ll find in this update.

● Regiment Prestige! Expanding upon the game’s regiment registry system, regiments are now able to prestige should they reach the new rank limit of 70.
» Decorative banners will be awarded to those that achieve this feat.

● Soldier Ranks! Valour. It is not just the regiments who will be able to showcase their brilliance with new decoration, the individual soldier rank limit has also been increased from 50 to 75.
» Soldier rank medals have been redesigned to fit the new valour medals.

● 3 New Maps! Battlefields. Glacier, Fort Al-Farid and Port Nile all of which offer different styles of play. Check them out on the Army Front official game servers.
» Input the following commands per map rotation to host these maps on your community server map_name fortalfarid, glacier and portnile.

● Featured Servers. With the success of the Battlefield Forger contest, this update also includes the ability for community servers to be featured alongside official game servers.
» Featured status will be awarded to well managed and put together servers that offer new experiences for players who may perhaps wish to try their hand on them.

● Regiment Registry Medals. Introduced a system allowing us to reward regiments with medals.
» More about this in the coming year, stay tuned!

● It's a jolly time of the year! Christmas trees, murderous snowball cannonballs, festive piano tunes and totally legitimate reindeer will be present.
» You can toggle off festive events through the game’s settings.

● Most fitting to the season, the main menu is now extra chilly.

● Reduced the score gathered through kills with officer pistols.

● Indicators exposing the location of surviving players on the minimap will show once reinforcements run out on the Army Battlefield game mode.

● Particle effects that are shown when a player is getting healed by a Surgeon are now more visible.

● Introduced more map loading tips detailing blocking, the use of the carpenter class as well as regiment recruitment.

● Solved an issue with floating objects on Marquette.

● Solved an issue with one of the fires next to the broken cannon on Autumn Watch.

● Solved an issue where sometimes the carriable Rocket Launcher would get stuck on the bridge in Heartmound.

● Solved an issue on certain objects contributing towards added points on the Army Conquest game mode.

● Solved an issue where the loser was sometimes shown as the winner in the top bar.

● Solved an issue where if you are killed whilst attempting to respawn with a different class, you would still respawn with your previous selection.

● Solved an issue where the 92nd Highland Officer was unable to equip a sword and a lantern at the same time.

● Solved an issue where sometimes other players wouldn’t show the reloading animation.

● Solved an issue where the ‘rc remove ships’ command didn’t update the top bar detailing ships and their damage correctly when the ship despawns.

● Solved an issue where you would receive additional experience for standing in line even if you damage a friendly player.

● Solved an issue which resulted in mouse sensitivity changing when going to aiming whilst crouching then standing.

● Solved an issue where sometimes a ghost strike could be issued when holding a spyglass, instrument or other carriable objects.

● Solved an issue where the crouch to stab timer didn’t trigger correctly when meleeing with rapid crouching inputs.

● Solved an issue where audio was missing from the launch screen where the Anvil Game Studios logo shows.

● You will be unable to see servers in the lobby unless you update your game servers to the latest update - Game Version 1.11.


The whole team at Anvil Game Studios would like to take a moment to thank everyone who has continued supporting us throughout what has been a challenging year for everyone. Without you, none of this is possible.

We hope that we have brought you a glimmer of joy for this year and we look forward to the start of the new year and what is to come.

Once again we thank you and until next time, may good health be yours.