For this update, we would like to go into detail about why we chose Wing Commander and not some other space sim, such as X-Wing, I-War or Elite to base the game on.

There are a lot of good space sims out there and we certainly drew inspiration and learned lessons from them. For us, though, Chris Robert’s masterpiece Wing Commander series captured the very essence of what makes space sims so compellig. Chris Roberts and his team at Origin systems created a compelling mixture of sci-fi and World War II history, all told through the perspective of a skilled pilot that the player could relate to. The Wing Commander series was a triumph of great game dynamics and offered a highly immersive, branching plot line which made you feel that you were Colonel Blair. Your choices mattered. Your performance influenced the outcome of the war. You formed meaningful relationships with your shipmates, and the quality of your relationship with them affected their performance. That is what drew us to Wing Commander as a universe we wanted to tell a story in. 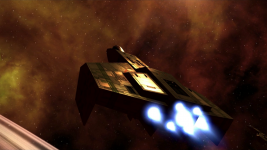 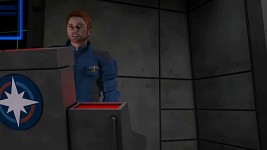 The movie-like feeling from classic Wing Commanders is unfortunately partialy gone. One of our main goals in creating Saga was to provide a strong story that offers compelling characters in thought provoking situations. We quickly learned that without a budget and a sizeable team can not emulate the performance of Chris Roberts and Origin Systems. Cut scenes between missions have always been one of the hallmarks of the Wing Commander series, they were used to drive the story forward. We are mostly limited to in-game dialogue and scripted sequences to perform that function. Mission elements and dialogue flesh out characters' relationships and motivations, all while expanding the overall narrative. This approach also allows us to take the original mission design and carefully refine it borrowing elements from critically acclaimed titles such as X-Wing, Tie Fighter and Freespace. The fact that there are just a few cut scenes makes conveying story a delicate operation. Nonetheless, I think the net result ended up being a lot of fun for the game player, and that's the audience we had to please.

Lastly we would like to thank everyone who voted for us during this year's competition at the IndieDB. You are amazing!

If I may add a reason for choosing Wing Commander to what you've already written, Elite's focus isn't solely on fighting space battles; you can also trade with pilots, space stations, and cities, ferry people and supplies from one place to another, and otherwise explore the galaxy. Since Freespace 2 was never designed with any of that in mind, you'd have to add all that functionality yourselves.

Besides, you and your team clearly have a passion for the Wing Commander series, so it's quite understandable why you choose the game series you did.

I could not be happier with the gem of a space Sim you guys have created. I am a die hard wing commander fan : games, books, you name it. Needless to say I was slightly biased from the get -go. Thank you so much for your hard work and total dedication to making my year with Saga. When I start that game up I cease to be an American, and become a fighter pilot for the Terrain Confederation. This was a dream come true after EA closed the door on Origin. Using the FS2 engine was brilliant and this is the most refined and professional free indie title I have yet seen. Bravo!!!