Surprised, excited, and motivated from the amount of attention we received today from last night's update, we figured it'd only be fare to provide yet another update!

Whoa! I am truly impressed that our last update (which was last night) attracted so many people and interested over a dozen more Mod DB users. For a few days or even a couple weeks, I think, we had not provided much in-depth details about the mod's development. So I figured posting something to look at and read would be enough to satisfy you guys... turns out I was right!

After providing two work-in-progress terrain screenshots of the Valley of Trials' entry/exit and a development update, the response we received was tremendously more than I had anticipated. Within 20 hours - and still counting! - we've accumulated 1,405 visits and 16 new Watchers on Mod DB, thus bringing Wc3:WoW from rank 300-700 up to rank 7. In fact, Wc3:WoW reached rank 7 within only a couple of hours, so I'm really happy with how things are going so far.

Because you guys have shown that you're really interested in Wc3:WoW, I've become really motivated to work harder on the terrain and try to show off at least three new screenshots before the weekend begins. This weekend's progress might even be better! Due to the amount of anxiety, motivation, and inspiration - thanks to you guys - I've worked on Valley of Trials for about four or five straight hours. May not seem like much, but I think I've done some nice work so far. You probably won't notice the differences, but I've accurately created about three or four new ditches/craters and about three new cliffs/mountains/steep hills. Some other, more subtle changes, that I've made to the terrain include unit placement of Mottled Boars, Scorpid Workers, and Lazy Peons (Lazy Peons are all by trees) and have even placed them where I saw them in World of Warcraft, so hopefully the experience is a lot more like it is when playing World of Warcraft.

To cut to the chase, here's what I've done today so far: 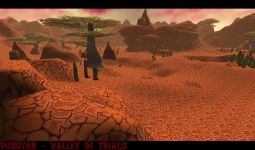 Not much else to say for terrain at the moment. But I talked to Yixx today and he's made a bit of progress himself on the character creation system and interface. He's reported that he has successfully implemented the system into the campaign and is ready to roll on. But first, the interface for the character creation and character loading needs to be finished being coded. Yixx won't be able to get much done for about a week or two unfortunately due to exams, but no worries... I will be trying to get a lot of terrain progress done and over with.

It's been a really long day though and I'm going to call it a night. Check up on the mod tomorrow for other updates or post edits. Feel free to post questions (except about the release date or where to download) or whatever in the forums or right here. Thanks for the support everybody!

Beautiful work! It was that update last night that got me to take notice. Looking forward to the final result!

Wow that's really great work, I can't wait to see what it looks like when it's finished.

Will try my best yet again tonight to release another work-in-progress.

Pace yourself! You still have plenty of work ahead in terms of game assets (levels, props, skins etc.).
And don't give up.

Craka_J nice working on this mod!

But it does indeed look and sound intriguing.
I wish you the best of luck, and I'll keep an eye out for updates on this one.

I cannot wait at all for this mod to be finished. Keep up the good work craka

As everyone else I cannot wait for this to finish! I've been looking at this mod since the old wc3wow website, ALOT of progress since then. Beautiful work indeed.

I have been watching this mod for a very long time, this post inspired me to sign up for an account with moddb and show my support. I had no idea that developers take notice to that sort of thing. I have been watching as you guys struggled through some troubled times and have pulled through. The mod looks excellent with professional quality, keep up the great work!

Thank you very much! All support is greatly appreciated. It motivates and inspires us to continue working on Wc3:WoW and do better. Unfortunately yesterday I was very busy and could not get much done - but there was a tiny bit of progress. Two more screenshots to release before I can happily say I've met my goal and promise to present a total of three screenshots before the weekend begins.

Craka_J it think that this mod is oneof the best ever, becuse thing about all of the guest that can write comments and mod watch, the are still all whaiting :D