A short summary of how things are going with development of Prisonscape.

There’s been a while since our last update, and I think it’s time to sum up what we’ve done in the last few weeks and what are the plans for the future. Tuomas has been busy with the key features such as inventory and item handling and these are coming along just nicely. Next up is the job system, which will require a lot of iteration and testing since there are a lot of moving parts there. 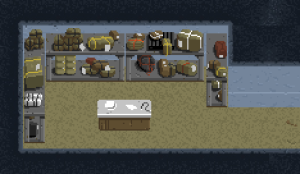 We’ve pretty much finished the first version of the County Jail in the game. This means that the graphic tiles and the layout are done but we still have to polish it up by adding details, light and shadows, etc. Jail is the first “chapter” in the game and the player goes there to wait for a trial on his wrongdoings. They are designed to be temporary residences for the inmates, but some people stay in them for years, waiting for their trial date. This is where the player gets to know some of the major non-player characters and learns about basic game mechanics, such as fighting and trading. 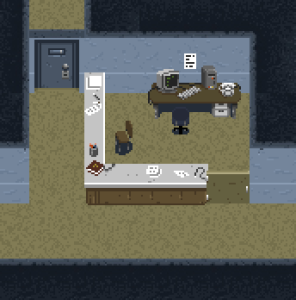 We’ve also started working on the sprites, so anytime soon we can introduce a bunch of new and interesting NPC’s you’ll find in the game. We want to create a library of body types, body parts, hairstyles, etc. so we can easily build a large reserve of NPC’s to throw inside the jail. As the prison environment itself is quite boring place, we want to add more color and variation by creating interesting looking characters to interact with.We also have a very talented guy working on the sound effects. He already made some convincing stabbing sounds that made me cringe (in a good way!), and we are very confident that he’ll provide us with some of the best effects the indie gaming world has seen in a while. We also have negotiations with experienced musicians about the music in Prisonscape.

So, that’s what’s going on. Now listen to this amazing song that will put you in that ‘Doing time’ mood:

Alright, was starting to wonder what was going on. Can't wait for the release!