Post news RSS What the heck are these!?, You may ask.

This weeks update will be about ALexjb's scout model which he has been working on.

Hey again everybody! This week's rather a smaller update with a few less pics and only one video, But still its a good update and its going to finally tell you what the 'common' enemy will most likly be, So here it is! the Scout models (click the image's to get a better look at em'). 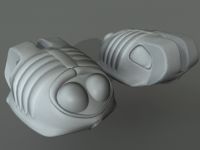 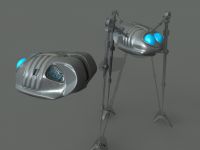 And finally we have the awesome video that Alex made to show you all... well what you will be fighting and or running from check it out:


Hope you enjoyed the update!

I some how think the scouts shouldn't be a smaller version of the tri-pods, it sort of makes you think that the aliens are really small and they sit inside the scouts.

I gotta agree with you also. But why not just say that they are remotly controlled(would fit there role as scouts as a casualty would't mean death to an actual alien).

I think that I agree with Packer - it's strange

A size between the human and the Larger Tripod could be perfect I think.

I like it as a common enemy, but I'd suggest that you take away the two windows of the scout (as it's intentionally supposed to look like eyes) and make it one small sensor, reinforcing that it's a drone.

So maybe the scouts should be a little larger, maybe they could use some changes but irrelevant of the scouts similarities to the 100 feet beast of a machine, I think it should be said that Alex is pumping out some great work.