[WELCOME TO SPLIT]
Hello and welcome to SPLIT - SPLIT is a sci-fi indie puzzle platformer set around the players ability to switch between dimensions. It is based upon then multiverse theory which states that there is an infinite amount of alternate universes being slightly or even completely distinct from ours. Some of them may have but only simple differences such as man built architecture or environmental outcomes whereas others are based upon completely different or altered fundamental laws being difficult to even comprehend. This offers endless possibilities resulting in many challenging and ever-changing puzzles and jumping passages demanding both logic and dexterity to master. 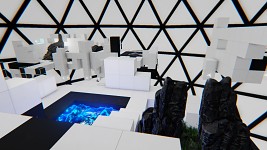 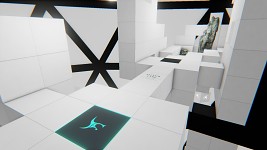 [GAMEPLAY]
The core of SPLIT is the players capability to switch between dimensions. At first only cubes will be affected representing the blue and the red dimension, though later in the game all sorts of things will be changed such as weather, gravity, light or even time and space itself.

One example could be weather and temperature. Imagine that in the current dimension it is warm and rainy, so now what happens if it is cold in the other one? Water is frozen, hence impassable seas can be walked on whereas a waterfall can not be passed due to its solid state. This is but only one example of how the feature can be used.

Besides switching dimensions there are other abilities such as a jump boost (boost forward in the air), slowmotion and electricity induction (activating objects from afar). Even the environment offers many possibilities due to jump-, speed or other special-cubes.

The further you progress the more of these elements will be unlocked and combined to keep a steady learning curve generating a great flow. (See “SPLIT – Prototype Gameplay” video to see both simple and complex puzzle examples.) 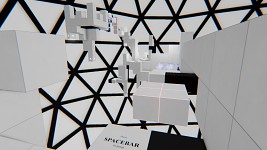 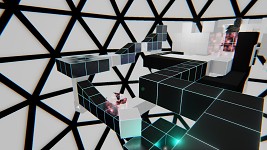 [STORY]
Set in the near future, the story of SPLIT starts with a huge sphere landing on earth, hovering over the ocean. It is a massive object with dimensions beyond the scope of current technology. Some men were sent to investigate and study the sphere discovering an entry that can probably only be entered by one person with a special DNA sequence... you.

You're encountering multiple, testchamber looking like rooms. But who or what built them? Might there be someone or something, builders even? And how come it is possible to switch between dimensions in the first place? All of these questions will be answered in the final game once upon its release (TBD). 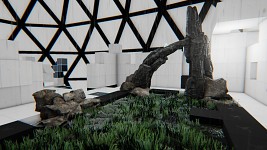 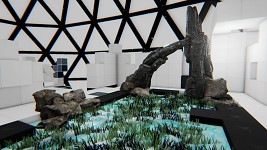 [DEVELOPMENT]
Currently SPLIT is an pre-alpha state and the “SPLIT - Prototype Gameplay” video showcases the current state of development itself. Most features have already been implemented (blueprint only) and the style has been found after a huge revamp. Most parts of the story are finished, though there will be always room for change and improvement. A simple savegame system already does exist, same as a menu system, video settings and VR implementation since the game will be fully developed to run perfectly using (and of course not using) VR head mounted displays. All in all most of the basics have been done meaning that the real production can begin soon.

Once enough feedback has been acquired the style and gameplay can be finalized and the production of the game will start. The final game will include 15+* levels, a soundtrack either common or unique*, a complete storyline and basic game functions such as a main menu, scalability etc. It'll be a fun game in the spirit of a Portal or Q.U.B.E. where solving puzzles and jumping are the main mechanics but with the twist of switching between Dimensions.

This game is currently developed by one person only, but with a greater budget more resources and people could be made available. This project is based on my bachelor thesis about dimensions and parallel universes in games. I've put all my heart and soul into it... and I will continue doing so until its completion.

*=based on the budget available 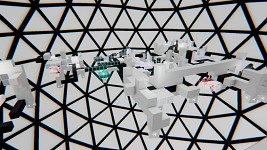 This is simply mind-blowing, keep it up
Tracking !

Looks really promising.
Can't wait for more infos about it!

Beyond the Split Platformer
Related Engines