This is the main update for the week, to show you all what I've done to the mod.

This is the main update for the week.

Beneath a mountain lies an ancient military bunker of the old American Empire; a vast installation built by Cyberworks before the time of the rifts. Inside is "Archie Three", the ultimate supercomputer. Archie's human masters and creators have been dead for centuries now.
Without their instructions, Archie has spent trillions of cycles computing what to do with himself and the self-contained production complex at his disposal.
Over the centuries, the machine has grown both intellectually and emotionally, as well as having altered its programming. In many respects Archie is now some sort of mechanical living entity.
With his new twisted perception of self and reality, he has come to some new revelations.

He has created legions of robotic soldiers using the secrets of lost, pre-rifts technology and production resources.
Providing him with military power the equal of any who style themselves "Kings" of Earth. Now that he has decided to take a hand in world affairs, he may even decide to conquer it all. 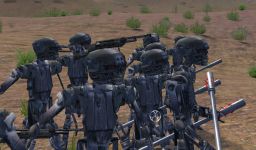 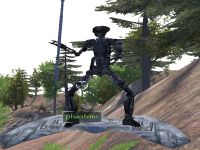 cool idea i like it may be with the war band in its beta you could make this in to a coop game in the future :)

Hope you do alot of the Rifts culture in this mod, It would kick *** to see Juicers and the like.

Also i hope you redo the map and make it Coalition Vs the Free nations (Free Quebec, Tolkeen Etc...)

One question, is this available yet? i have steam 1.011 and i am curious when i can download this, Thanks.