Sometime in Earth's future, the face of the planet is decimated by a nuclear war which invertible opens dimensional portals all over the world with devastating results . Cities fall, civilization collapses, billions of people perish, and the portals let though hundreds of different aliens and terrible demons to prey on the planet .

The story of wastelander picks up 100 years later. mankind has, at last, crawled up out of the ashes to reassert itself in the world to take back what is rightfully theirs . Only this world is as strange as any alien planet. Reshaped by dimensional energies, inhabited by alien beings and horrors, humankind must learn to adapt to this strange new world or perish.

Based on the Rifts pen and paper rpg game but this will be more post apocalyptic and less about magic ,more of a mech and aliens in a mad max back ground

The Coalition
The Coalition are fascist human supremacists with a totalitarian government, restrictive internal media, restrictive education, and mandatory military service. The Coalition is ruled by Emperor Karl Prosek, and is genocidally opposed to all aliens, D-bees (Dimensional Beings), human mutations, and Magic. Their ultimate goal is to return the Earth to its pre-war status, and do so by attacking anything and everyone that is foreign to Earth as it was before the cataclysm.

The Xiticix
Giant humanoid insects from another world, Xiticix numbers have grown from a few dozen to almost four million in only 50 years! The Xiticix have no allies; they exist solely to breed, conquer, and terraform the Earth into a world suitable only for them. Apparently more intelligent and advanced than their "bug-like" appearance would at first suggest, many foolish adventurers have dismissed the Xiticix as non-sentient, only to end their days staring down the barrel of a Xiticix-manufactured glop rifle.

Cyberworks
Beneath a mountain lies an ancient military bunker of the old American Empire; a vast installation built by Cyberworks before the time of the rifts. Inside is "Archie Three", the ultimate supercomputer. Archie's human masters and creators have been dead for centuries now.
Without their instructions, Archie has spent trillions of cycles computing what to do with himself and the self-contained production complex at his disposal.
Over the centuries, the machine has grown both intellectually and emotionally, as well as having altered its programming. In many respects Archie is now some sort of mechanical living entity.

He has created legions of robotic soldiers using the secrets of lost, pre-rifts technology and production resources.Providing him with military power the equal of any who style themselves "Kings" of Earth. Now that he has decided to take a hand in world affairs, he may even decide to conquer it all.

The Pecos Empire
The Pecos Empire is a loose-knit association of dozens of independent kingdoms and bandit groups. Aliens, technology, and magic exist side-by-side in this chaotic society based in southern Texas. The primary strength of the Pecos Empire rests in their mobility and diversity, making them all but impossible to engage and destroy. Sabre Lasar, self-proclaimed Emperor of the Pecos Empire, is warlord of the region's largest military band. While his position is not powerful in itself, Sabre Lasar has cultivated an environment where many of the other Pecos Empire forces come to him for guidance and acknowledge his leadership. "From the seeds of our diversity, together we can build something great. We have the people, we have the territory, and with me in charge, we have the leadership to become a great power."

The Federation of Hell
A new threat to man has appeared in the last 10 years ,from dimensional portals they made a lighting attack on the crumbled remains of Tolkeen after its war with the Coalition.
Coalition force fell back quickly to their own lands , giving ground to this new threat which they were not ready for.
The Federation of Hell is a force of demons and many other fiendish servants, they have conquered or destroyed all that stand in the way , enslaving or corrupting the population to its cause. Their goal is to take over earth , to make it a hell on earth

FEATURES
4 types of bikes as mounts,2 cars and 2 pick ups as mounts, (yes they are driveable
)and 1 hoverboard as a mount.
lots of guns, laser weapons and melee weapons added .lots of armours , helmets and clothes added. (not many native ones left in mod)
4 types of mechs as troops. new aliens , robots , demons and mutant animals as troops .
new mercenaries .
5 new factions , The Coalition , Cyberworks , The Pecos Empire ,Federation of hell and The Xiticix .
all with new troops .

this mod is not finished yet so please post or Pm me with and bugs , thanks

Move your folder called data in Program Files\Mount&Blade to somewhere safe DO NOT detele as you will not be able to play other mods or native.

you will have to change the data folders over again to play other mods or native .

or use iron laucher Mbrepository.com

Bugfix is on the way just finishing it off .

Hi all, this is the wastelander mod update 3. Just posting to update you on what's been done to the mod this week. This week I've been mainly redoing the coding and features.

So as it stands at the moment mod features are :-

Also this week I have been working on some new armours. 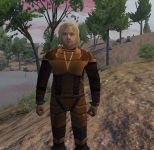 This is the main update for the week, to show you all what I've done to the mod.

This is the first version of the wastelanders mod for mount and blade. its not totally finished but its a hell of a mod for you to play as it is. let...

The Creator of the mod was last time active here on December 2015 and I doubt that this mod will be ever finished.

I am not a modder. I can't make 3d models, textures, animations, scenes and all that sort of thing but I'm pretty good at using module_system if I have, let's say, OSP packs (OSP is short for Open Source Packs - everyone can use it but if he does, he MUST add the creator's name to the credits).

I could probably port this mod to Warband and add new stuffs but without the creator's permission, I can't do it because of copyrights - this mod IS NOT AN OSP. I don't want to be banned from forum for doing something simple like porting without permission, even if all credits and honours would go to the original Creator.

To be honest, I would like to play this mod in it's new version but there's no way that the Creator will be active here or somewhere else. As long as I can't contact with him, I can't do anything.

So if any of you know A LEGAL WAY FOR PORTING THIS MOD TO WARBAND which not get me into the trouble and not get me banned from the forum, I'm ready to do it.

This comment is four years old by this point, but methinks the best (and apparently only) way to legitimately port the mod to Warband would be to ask for permissions from all the people this mod used assets from. Also, potentially put a disclaimer for del, stating that you ported the mod because you didn't want it to go to waste, but couldn't find him for permission.

I hope the dev miraculously comes back and updates this mod.

Hey i'm not sure if youre still working on this but if you are, please don't let this die, it's a great concept and i absolutely love what you've done here

This mod is one of the greatest i watched! i'm knocking unsconscious some Mutants for recruit they, you must put in a new version, a mutant race playable (i mean the green monsters with three arms and blood in almost all the body) really, amazing mod! :D

Did you remember to move the data folder to the directory the .exe is in? I forgot to move it and when I did the giants stopped being immortal.

Is this mod still in development? I've never seen a mount and blade mod with mechs and things, and it would be a shame if it were dead.

it looks dead if the demo is only out....gosh i hate dead mods.....one day i hope people come back to mount and blade and make more awesome mods anyone agree?