Today we would like to talk about mechanics covering the famous Alliance and Horde: how they work and when they appear.

First of all, let's agree on definitions. Since the faction is a term of CK3 referring to rebel factions, we've decided to call the Horde and Alliance simply unions.

The unions are networks of alliances. Every member of the union is allied to all other members. Unlike in CK2, the unions can't be united under one title with all the members being vassals of the leader — at least for now. We've decided to go this way to prevent the unions from being strong, uncontrollable blobs with one leader. 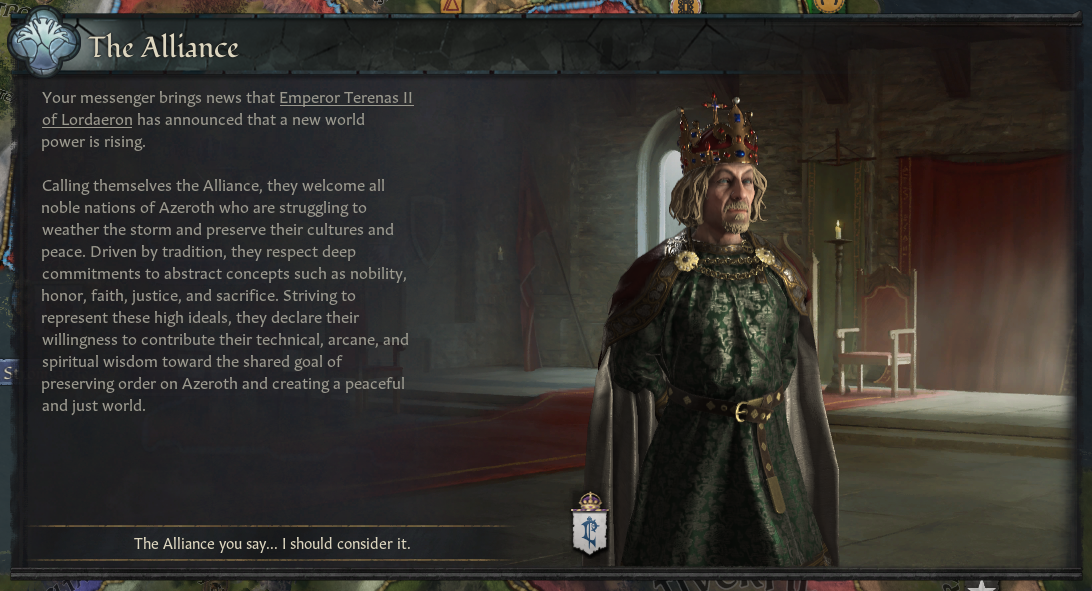 So how do I create the union, join it or find more members if I'm the leader? To create the union you must have a reason. The unions can be formed if the situation in Azeroth is… well, heating up: an invasion of green aliens, the Scourge releasing a deadly plague, or the Legion wanting revenge. Almost anyone can join the union if they hit the required opinion, but during such crises any new ally is welcome. If you're a leader, you can improve relations with neighboring rulers until you can finally invite them. 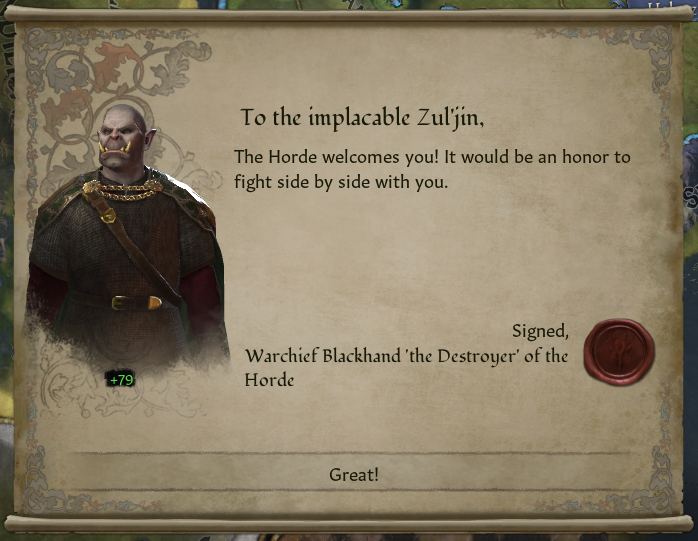 Following vanilla alliance mechanics, you can call your union to defensive wars for free, but you have to pay prestige for them to join if your goal is to attack someone and take their lands. So the unions will be mostly for defensive measures… except for the Horde in the First War, which will be using the union as a wrecking ball against the Eastern Kingdoms.

One of the biggest features that never was a part of CK2 is the Unions Interface. Thanks to Paradox, mods finally can create their own GUIs. So, without a second thought, we've decided to move all information about members, military powers, and leaders to a new window. 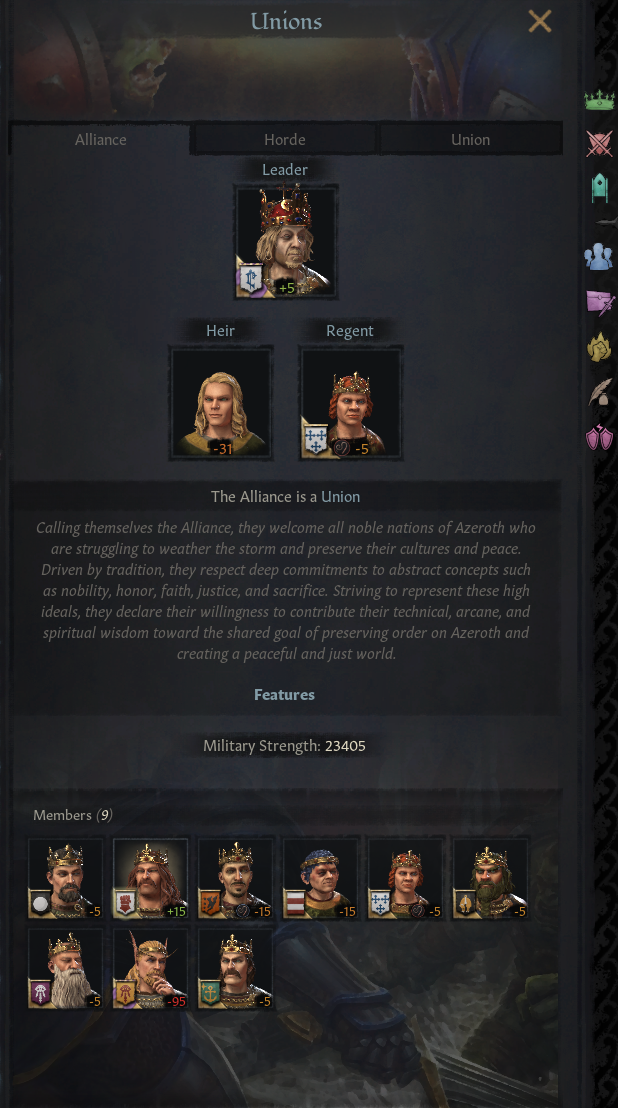 You may wonder who the Heir and Regent are. The Heir is the one who inherits the union leadership in case of the Leader's death. Pretty much always, the union heir is your primary heir. The Regent is the union's second-in-command. chosen based on the size of their armies, diplomacy skill, and realm size. In case both the Heir and Leader lose their right to lead, the Regent inherits the leadership. For example, when Lordaeron falls to the Scourge, Stormwind will inherit the leadership of the Alliance.

One more feature we introduce in CK3 is renaming. Now you can name the Horde and Alliance as you like and watch, for example, how the USSR and NATO fight each other. 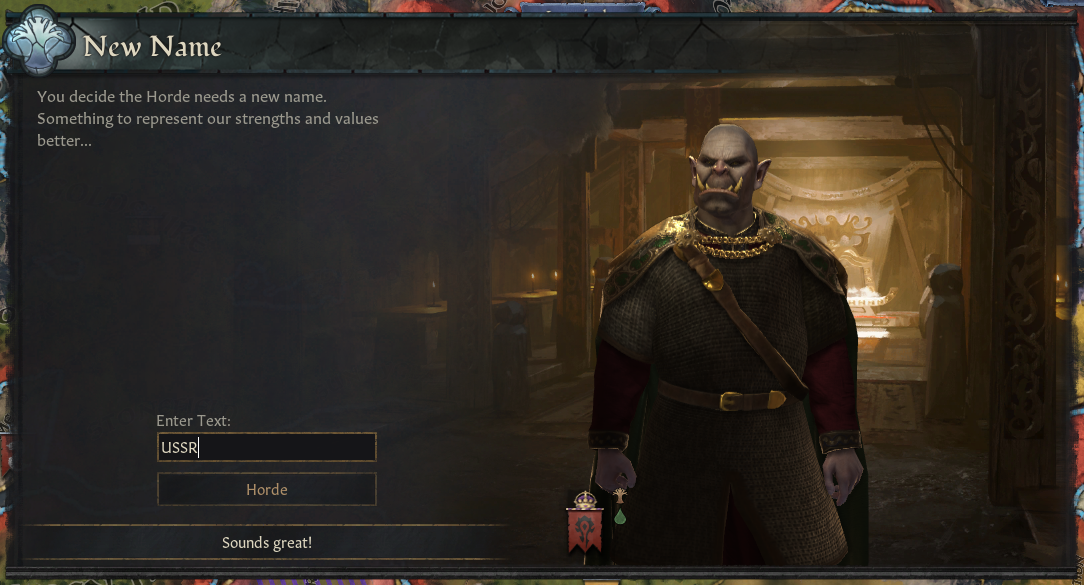 And the last feature: custom unions. So far, there may be up to 3 unions in the game. Of course, you may name it as you like: be it the Tauren Confederation or the Empire of Zul. Unlike the Horde and Alliance, the Custom Union welcomes rulers culturally and religiously close to the leader, so the custom union will be more exclusive than the historical unions. 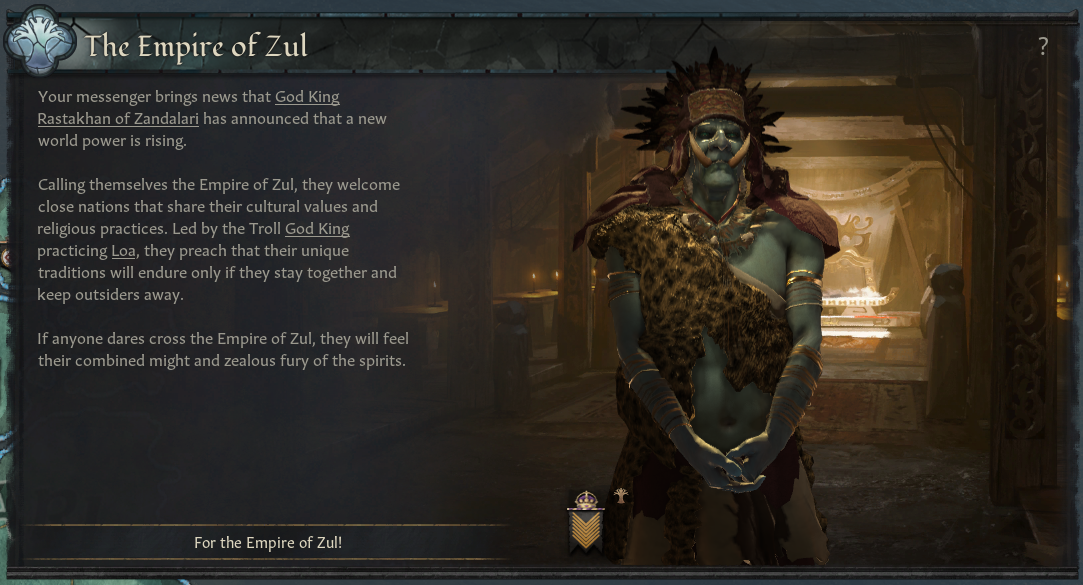 I want to remind you that the mod is still WIP, so you can support us by Patreon or Joining the Team. If you have passion and patience, we can help you to learn the fields like 3D models, map, and scripting, bringing the mod closer to release.

That's all for now! Thank you for your attention!