Post news RSS Want to know how our studio works?

A close look and a full insight into each and every member of our team, from artists to programmers!

Every time I read an interview with the creators of a video game, it’s always the same, it’s the people in charge og Social Media, The producer, or luckily the Game designer who answers it.

That’s the reason that made me wonder…what if we could give voice to other members of the staff? Or even better…what if the entire team could give their own answers?

Under this premise, today begins a two-chaptered “DragonJam Confidential”series. A complete interview where you’ll be able to read opinions and thoughts from each and every geek member of our studio. 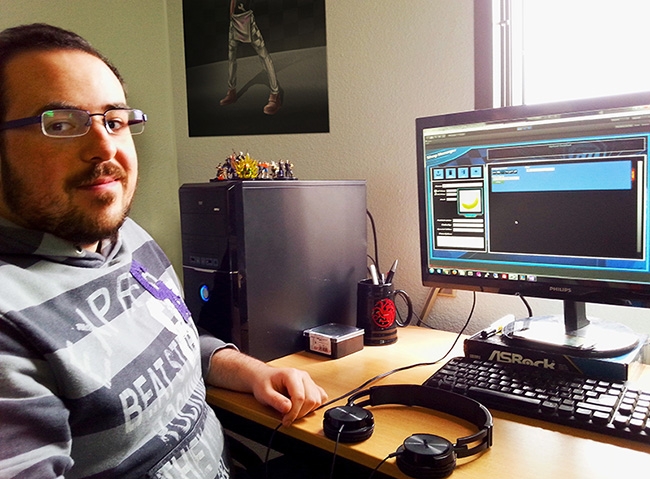 This last part is being a really busy time. Most important thing for us now, is to finish all playable aspects of the game and to fix all bugs affecting the core of the game. Facing at last the beta release, we want the game to respond perfectly and transmit the feel of a well done job to players. A title crafted with great care, passion and detail-oriented.

Lastly, I’ve been working hard covering several areas of the game, but specifically, I focused on the Tournaments, the Matchmaking system, the Store, management of extra content (I mean, the way new stuff is added to the game without needing to download everything from the start) and the game message boards.

- You’re in charge of coding the game’s web, link it to the game, and handle the database. What tool are you using to get this done? Why did you choose these ones and not others?

On the one hand, the website is completely done using Drupal with some add-ons, like for example phpbb for the message boards. We chose this due to its great expansion potential and facilities to scalable programming. We couldn’t be ok with services like “Make your own websites in 3 steps”, taking into account the great importance of the game/website integration.

We use many different database management systems, but we can say our main ones are Riak for game aspects and MariaDB for web services. Riak is very important because it’s a service meant to allow massive access and terrifically scalable, very helpful for an online game like ours. By contrast, we used a regular SQL for the website since it’s usually much more stable handling content which usually doesn’t frequently mutate. 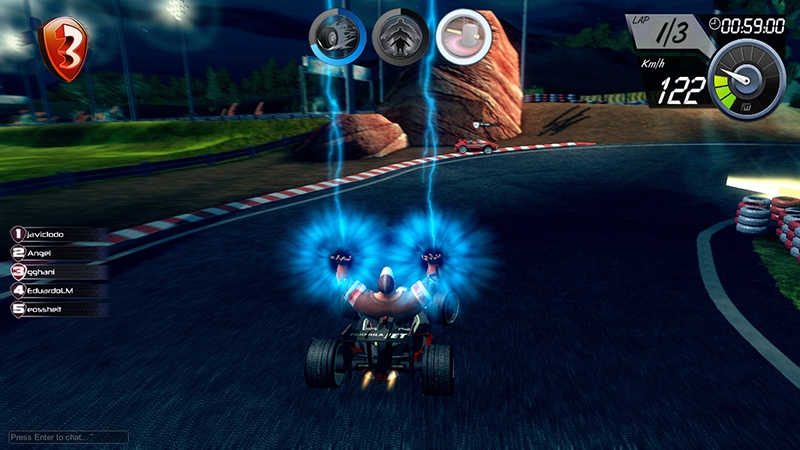 - It’s common that artists or even game designers mention certain games as personal favorites or titles that influenced and encouraged them to choose their profession. This is something that we barely see when it comes to programmers, could you mention any video game that caused you an impact by the way it’s coded?

Wow! I could non-stop talk here for years! I’ll try to give a brief answer and cover most of my choices.

I really dig the job done by guys at Epic with Unreal Engine 4, with a jaw-dropping C++ level of mastery.

I also get amazed with what Naughty Dog is capable of doing. They manage to pick up very resource limited architectures such as PS3 and its 514 MB RAM, and put it in awesome games like Uncharted or The Last of Us. It’s a proof that they’re one step ahead of most developers.

A special mention also goes to Nintendo main IP’s games (not only Mario titles, but almost every game from all IP’s featured in Super Smash Bros). Those are games polished to maximum and insane levels. It’s almost impossible to find something wrong in them, a bug, a bad implemented mechanic, or something that looked like done in a rush.

And finally, I’d like to talk about Bethesda. They’ve developed tools which allow designers to create infinite missions, weapons, armors and impressive skills. Besides the merit of creating full-of-activity huge worlds, they are also able to save the progress of a game containing hundreds of hours played and thousands of interactions within a tiny file of only a few megabytes. Awesome. 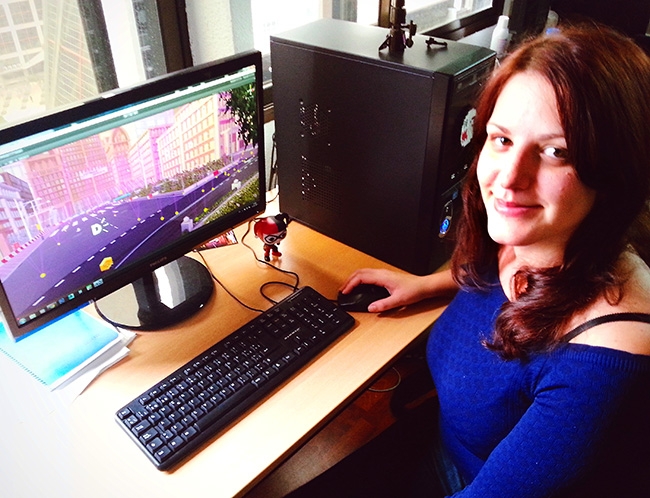 Right now, I’m implementing light probes in every game circuit. That’s a system which shines lights and casts shadows over the cars starting off the ligthmaps.

- Nowadays, the latest craze in video game industry seems to be “the graphics war” where some studios have made insane announcements like support for 12K resolutions, and where some players are getting really annoyed when they feel they were being given lower fps rates than first promised. What’s your opinion on this?, What’s your preference as a player?

I think that the players shouldn’t demand that out-of-mind graphic quality and focus more on the game itself. I’ve always thought that the game should come first. But sadly, it seems like the current trend is to focus more on movies than on actual gaming. 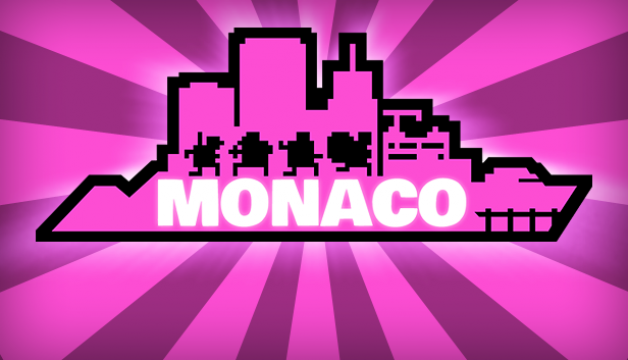 - We repeat the same question that we asked to Antonio, but this time we’d like to know what video games are on your top list because of their 3D environment work?

Uncharted 2 because not only its graphics are impressive but also its style perfectly matches the level design, thus, improving the gameplay. When it comes to indies, I love the aesthetic coherence within Monaco: What’s your is mine 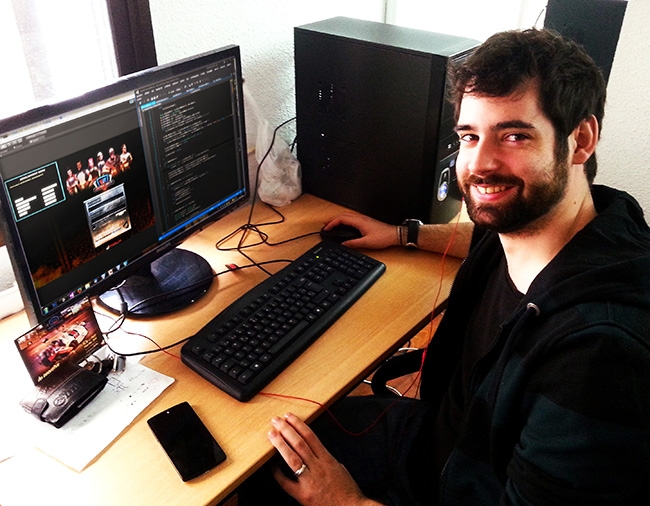 - What are you doing in this last stage of the development?

In this sprint finish, I’m dedicated to polish Formula Wincars systems, both codewise and also some details related to the interface which we are enhancing. Above all making sure a good and safe connection is made between players and our servers, taking a grab of every possible lock so everyone can play with no interruption.

- Apart from Formula Wincars, you’re also working on another game called Rovin Rogue, to be released later this year for Wii U, and in which Ángel is also involved (Ángel takes care of 3D environment art at Dragon Jam), what can you say about this project?

This is a project we started a year and half ago, and we have been putting our spare time and effort in it. It’s a platformer influenced by 80’s classics and pixel-art. It comes packed with a frenetic gameplay, especially on its local multiplayer mode. The game plot is also amazing. Truth is I’m pretty stoked on how it’s coming out and I firmly believe it’s going to work out real good on the eShop.

- Is it very different developing for PC and a desktop console like Nintendo’s Wii U?

We are developing Roving Rogue with Unity, the same as Formula Wincars. However, there are differences developing for Wii U. For example, providing support to the different controllers of the console, making it possible to hear the sound on the tv and the gamepad. Also saving game progress or being careful with the tools we use. Anyway, at game’s core the only thing we need to be really careful with is game performance since the game has to run smoothly on an specific hardware. 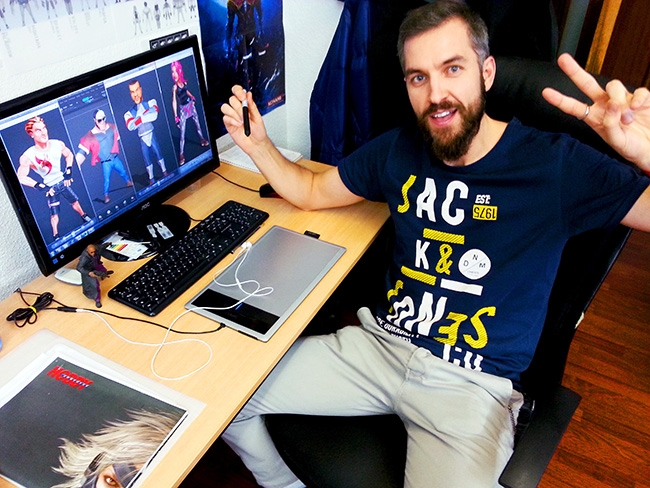 Currently, I’m polishing the animations of the characters and working on the game promo images, so we can introduce the game to the world as good as it deserves it.

- Could you explain to us what tools are you using to get your work done?

Well I mostly use Zbrush, 3DS Max and Photoshop. All set in a PC environment. 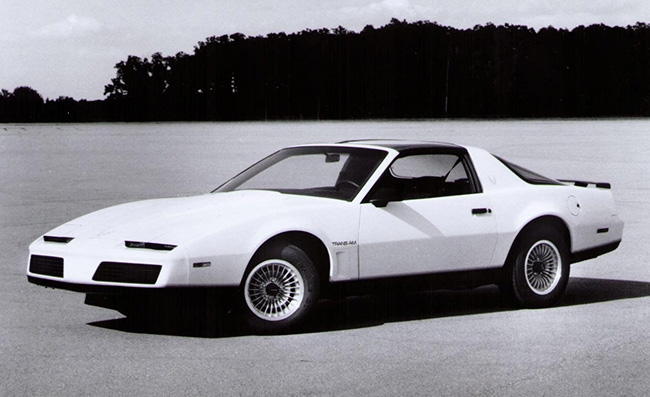 - Every car skin and alternative designs from the game comes first from your mind and ideas, and there are a whole lot of them, more than 100 so far! Where do you get inspiration? What are your favorite car models from real life non-videogames?

This is something inherent to my personality, I owe this all to my parents who grew me up surrounded by toy cars. I spent lots of hours playing scalextric together with my dad…even today, we still play scalextric sometimes, (kisses mom!) 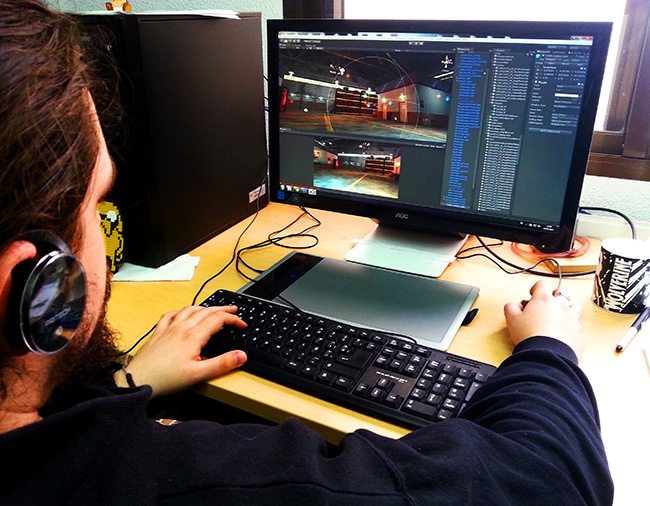 - What are you doing in this last stage of the development?

Since we now have a new physics system, I’m replacing the collisions used by the old physic for the new ones. Mainly, because they just don’t work the same way…..

- In Formula Wincars we’ll find dragons, zombies, statues of angels holding swords, dinosaurs, aliens and giant sharks….and all of them were modeled by you. Taking into account that this is a racing game and also that you’re a great MMO aficionado, could we state that you got your own way?

Absolutely! At the very moment I made the dragon I was already satisfied. Even so, it still lacked swords and fireballs. I won’t stop until players kill monsters holding an enchanted axe, and spreading all over gold coins and an epic armor. 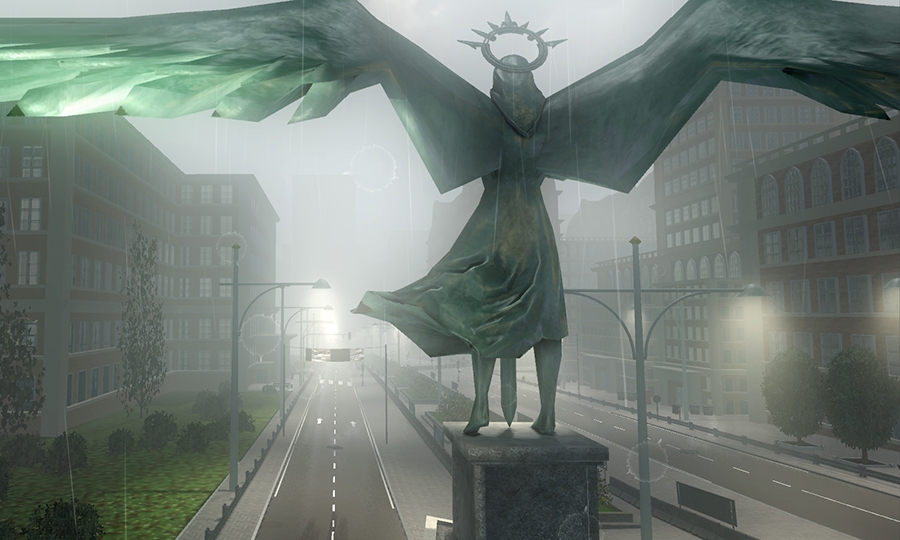 - Taking advantage of the fact that we’ve mentioned some of the creatures featured in the game, come on…tell us which one is your favorite!

That’s an interesting question indeed! Obviously, it’s the dragon. It’s also been the most difficult and complicated to make, but even so, I was quite motivated. I also enjoyed modeling the angel statues, mainly cause it made me recall my student days modeling human anatomy at Fine Arts.

Lastly, here comes one last question that Angel made up, he ask to himself and also gives a response. Prior to his answer, we say goodbye to all of you beloved readers of our blog, don’t miss our next post where we’ll publish all the other interviews to the rest of the team. As you can see there’s a lot of work here to be done yet to finish the game (as well as seek professional help for Angel!)

- One last question….please tell us, how come you’re so awesome?

That’s a good question, and truth is, I’ve been thinking about this for a long time now. Sometimes I wonder…It may be awesome people in the world…but someone as awesome as I am? I don’t think that’s possible…I guess it’s just the way things are.Some people are born with pre-loaded skills to be full of awesomeness, but question is, can anyone get to be so awesome as me? Obviously no, they can’t. It’s easy for me to be just the way I am, but not for them, others simply can’t

Great post guys! Best wishes for your studio and games. :)