Holy moly, time passes quick! Me and Jakob (@JahKob on twitter) started working together from the same location on Monday. It started with us two sitting around in my apartment waiting for Webhallen to deliver our computers. They arrived at around lunch, and then there was much unpacking.

Me and Jakob (@JahKob on twitter) started working together from the same location on Monday. It started with us two sitting around in my apartment waiting for Webhallen to deliver our computers. They arrived at around lunch, and then there was much unpacking: 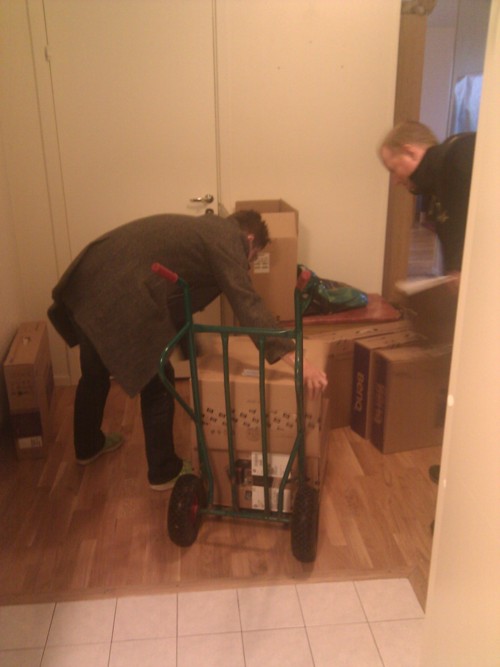 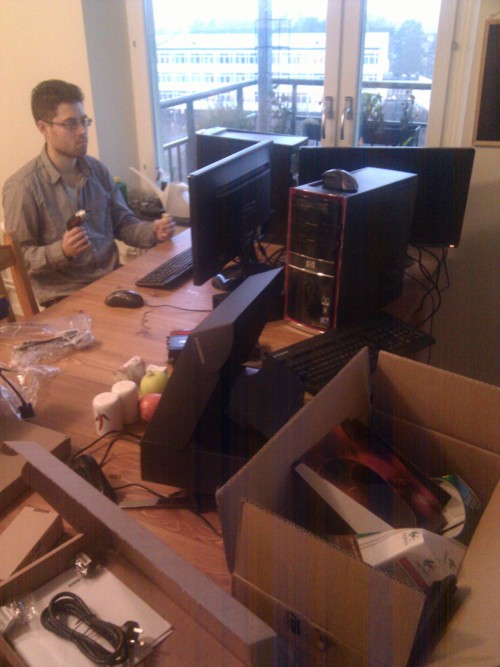 The computers are HP Pavilion Elite 345sc’s, the monitors are BenQ 24” LED’s (two each!). We also got a Asus GeForce GTX 470 each as a nice graphics upgrade, but unfortunately there wasn’t enough power cabled in the case to plug it in. So we’ll either send those back, or get new PSU’s.

For mice, we’re going for Logitech MX518’s. For keyboards, either Das Keyboard or the very awesome Unicomp keyboards (they use the same buckling spring technology as the old IBM Model M keyboards)

After that, we installed all the software we need (for me, that’s Firefox, 7-Zip, Java, Eclipse and Paint.NET. Oh, and a bunch of PuTTY tools)

Yesterday was a couple of hours of work followed by us heading in to the office to pick up keys and for me to do an interview for Level, followed by a business meeting.

Today and tomorrow will be two days of solid work. I’m currently working on server-side health and some performance tweaks. It looks like I might want to rewrite (or at the very least refactor) parts of the lighting engine to get better control over it. For server-side health, the current issue is that the client is sending the wrong entity id for targets.
I’m also looking into fixing a bunch of lag issues, specifically the returning blocks after mining them bug.

Jakob is working on a prototype of the new game, and is in control of the music. Currently playing is Free Mumia by KRS-One.

Daniel is working from home on his MacBook, doing whatever it is business people do. Probably something with contracts and scanners! (Why don’t you ask him on twitter? He’s @kappische)

On Friday, the furniture will arrive at the office. We’ll meet up early at my apartment, pick up the hardware, grab a cab to the office, then wait for the furniture (from Holmberg Partner) to arrive.

In other news, the Stockholm International Film Festival starts today. If you’re in or near Stockholm, you need to check it out.

nice we even get updates on the business. keep on it Notch!

its funny cause its actually thursday...

i hope to hear and see more from the allmighty notch

Hopefully this means next week = week of minecraft progress! :D

Most definitely would be awesome.