We break our silence for the first time in over a month and dish out some serious info on the vision modes in Depth. Oh yeah, and we've got videos to back it all up.

It's been a while since our last update so we decided to make it up to you in force. We have been working hard behind the scenes creating a plausible underwater world and developing the game's all important stealth gameplay. Let's talk vision.

Deep in the ocean light is a scarce commodity. As a shark this isn't really a problem, they can see in the dark. But what about a diver? Well, the depth diving team has the latest in night vision technology integrated into their diving masks. With the flip of a button, the world around them becomes illuminated. This comes at a cost however as night vision is a somewhat imperfect art - Leaving the night vision on does not drain energy, but it sticks you in a high contrast world of static and muted colour. This video illustrates the importance of using NV in dark areas like caves.

And what about sharks? How do *they* see the world? This is something that has been discussed only briefly until now. Today we would like to treat you all to a video of the shark "sonic vision" in action. It is a combination of night vision, environment awareness and sensitivity to movement. Oh, and it's colourful.


The shark is a hunter and hunters seek out wounded prey first and foremost. A diver who is critically injured will emit a bright red sonic signature, making him an easy meal! Sharks also sense sonic vibrations in the water at great distances, a diver who moves too quickly will be a presentable target. But I'm sure the video did a better job of explaining the system than I could :)

Last, but probably most important of all - We would like to present to you a dramatic new arena for our particular brand of hide and seek. "Olmec" is the sunken remains of an ancient mesoamerican city complete with sacrificial altars and giant god-head statues. There are plentiful hiding spots for sneaky divers amongst the ruins but there is also a lot of open water. Will you be able to extract the treasure in one piece? 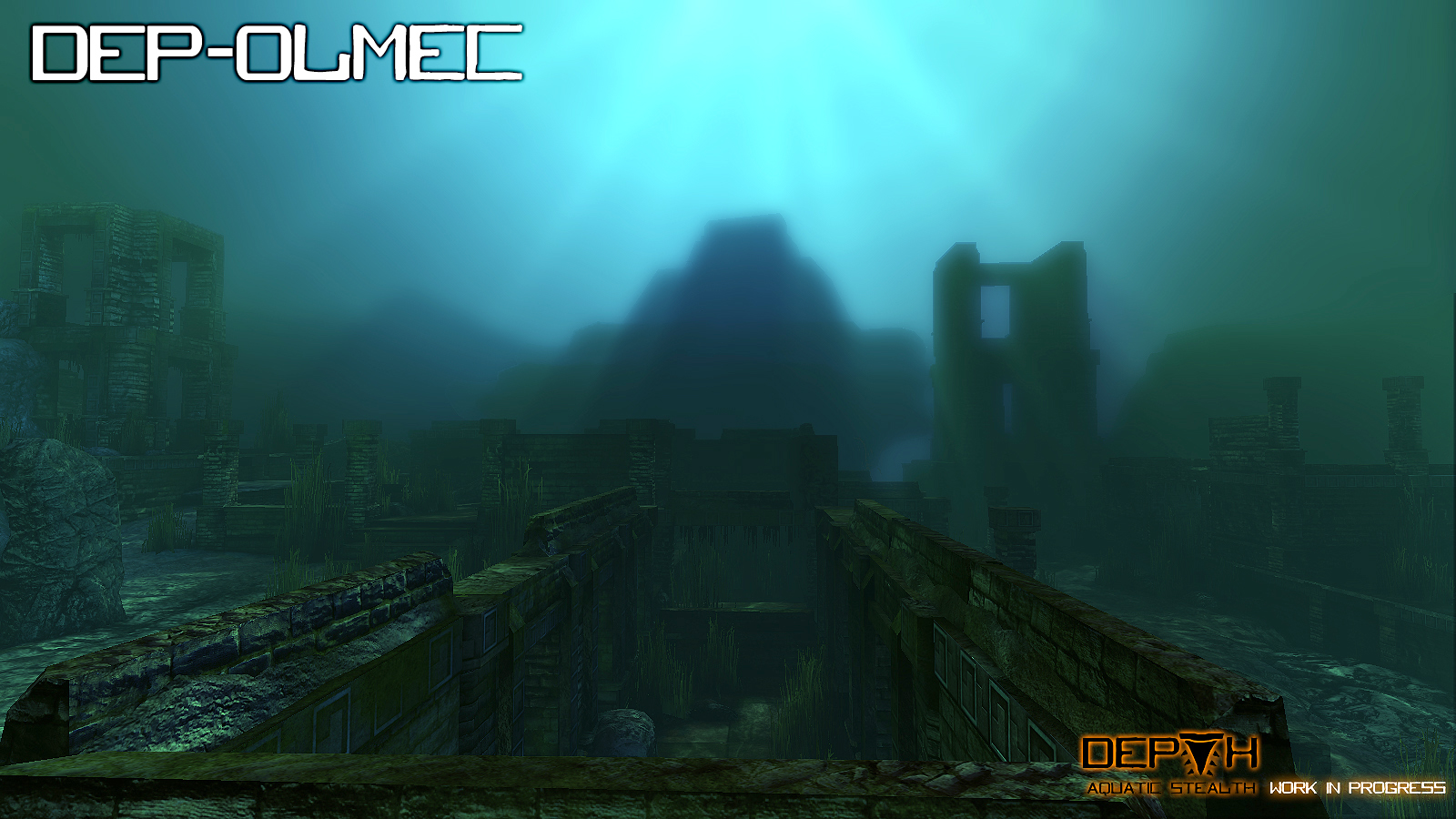 That's it for now! Be sure to join our forums and speak your mind about our latest media! Forums.depthgame.com

As always, watch where you swim.

Don't forget to check us out here too:

Sonic vision reminds me of the L4D outlines on your team mates. :/

BUT swimming in first person looks AWESOME! Im so buying this game.

Yeah it is a little like that at the moment. Colour coding is a great way of giving people rough numerical information without the need for numbers! ie. If the diver's outline is 100% green, he must be 100% healthy. if it is a shade of yellow/orange, he is probably 50% injured. The effects could definitely stand to be made more unique / impressive - but the concept is a strong one (even if valve went there first) :)

I'd say, tweak the range of shark sight, and therefore make it easy to sense the vibritions better.

Nice Work on the effects! Can't wait until this game comes out! So many games I want in this great year of 2010...This is one i'm for sure buying.

Great stuff. This is going to be a nice game.

One thing I always miss in diving/swimming animation is the thrust forward after each set of movements. There is perpetual movement and there should be acceleration. Acceleration should be seen after every stroke and then speed would recline again.

Everything does look good though. Without a singleplayer in development this game really makes fast progress. I think it's a wise choice to keep it as simple as you can. Lots to learn here!

One thing I always wonder about are upgrades. While, in theory, there is plenty of equipment available to the divers, all the sharks could get is improved health and abilities.

I'm not sure if it has been addressed or not, but are you going to have the sharks swimming backwards? From what I know, they cannot do this. Just curious.

sharks cannot "strafe" or swim backwards. They can turn and accelerate / Sprint.

Great stuff but the sonic vision is too flashy in my opinion.

Cool concept! I always dreamed about the game where you can explore under water ancient ruins or sinked ships or submarines like in James Cameron's "Abyss". Would be cool to see something in your game.

i dont mean to be irritating, and if you arent trying to be slightly realistic, thats fine, but divers shouldnt be using their hands to swim.

Most of a diver's power comes from his legs. yep. And those are kicking like crazy - you just can't see them when you're looking forward :)

Is pretty unrealistic actually, but I try to put hands in front of the camera as much as I can because otherwise you are just a floating camera, I guess it's one of those gameplay vs. realism things.

this and primal carnage look like new types of games , about time...

I really can't wait for this game. It's a really great idea and all of the work is top-notch.

This is the type of game that lets me sit on my *** all week playing, seems like one of those ones that just won't get boring, despite the length of time you play it.

the sonic vision is really nice, also, for the color scheme, make it WHITE or BLUE for when the other person is 100% healthy, red when he is with less than 15% of health and yellow for 50% of health or less... will change something :)
Also, I think that the diving speed of the divers is a bit too fast, and the shark one is also really fast, slow them down!!
Anyway, it's really nice, i'm buying this game if it comes to stores here in brazil :)

They will probably sell it on steam or their website too. That's how my cousin gets his games in Brazil.

this game will get awesome!
one of my greatest fears is being in the water with unseen monsters around you, the first trailer let my heart already beat 2 times harder :D

You guys have obviously put a lot of thought into this aspect of the game and executed each wonderfully. I for one, also appreciate the brief descriptive text posted with the vids. Really coming together nicely !