Pinoy game developer Tiger Yan has just released a freely-downloadable expansion pack called Wider War. “Wider War expands the coverage of the game from just Vietnam, to the neighboring countries affected by the war, such as Laos and Cambodia. It also covers the wars Vietnam fought with China and Cambodia,” explains Yan. As well as introducing dozens of new units, the expansion includes seven new maps and other functionalities. The game can be downloaded online for FREE. 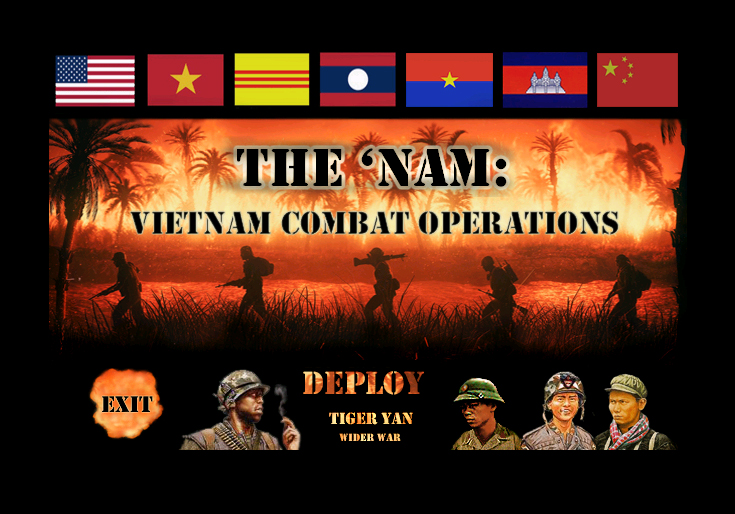 “Wider War expands the coverage of the game from just Vietnam, to the neighboring countries affected by the war, such as Laos and Cambodia. It also covers the wars Vietnam fought with China and Cambodia,” explains Yan. 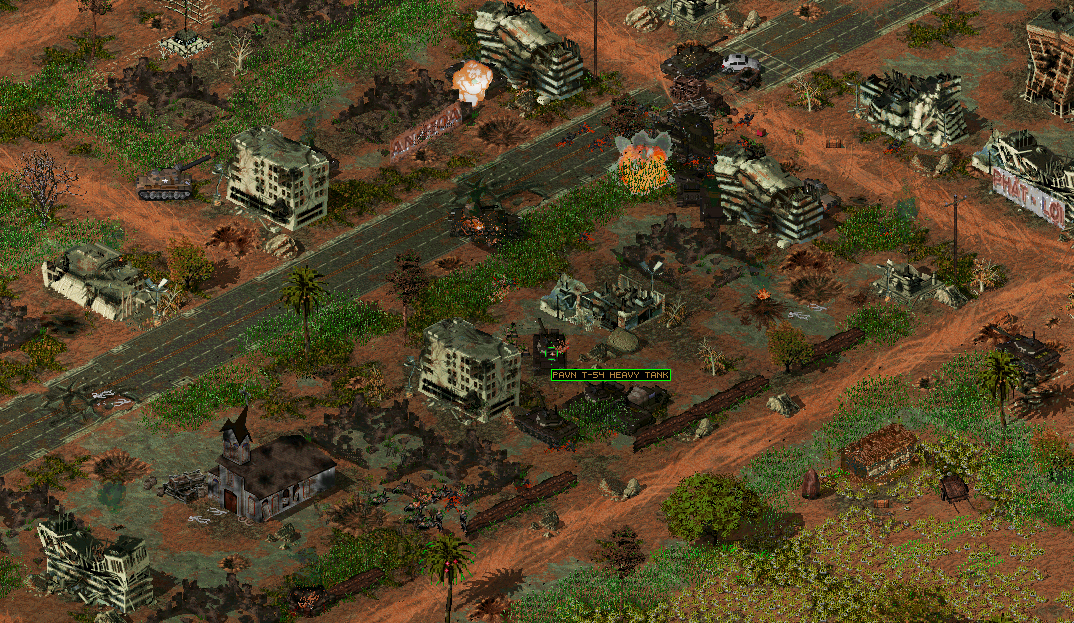 “No side lost more than the South Vietnamese, many of whom emigrated to America and other countries after Saigon was taken by North Vietnamese forces in April 1975,” explains Yan, who met many former soldiers of the now-defunct Army of the Republic of Vietnam (ARVN), South Vietnam’s much maligned army. “Not only did they lose the war. They lost their country and were forced to assimilate into either new countries or the new Vietnam.”

Often portrayed as inept, corrupt and cowardly, the ARVN actually fought well until their final defeat in 1975, even repelling a full-scale North Vietnamese invasion in 1972. Their courage was best exemplified by the Battle of Xuan Loc, where ARVN Brigadier General Le Minh Dao’s 18th Division stopped North Vietnam for two full weeks before finally being overwhelmed. The map allows players to command regular and elite ARVN forces – including Marines, rangers, paratroopers and even Dao himself. Xuan Loc’s fall heralded the end for the US-backed nation of South Vietnam.

The Killing Fields of Cambodia 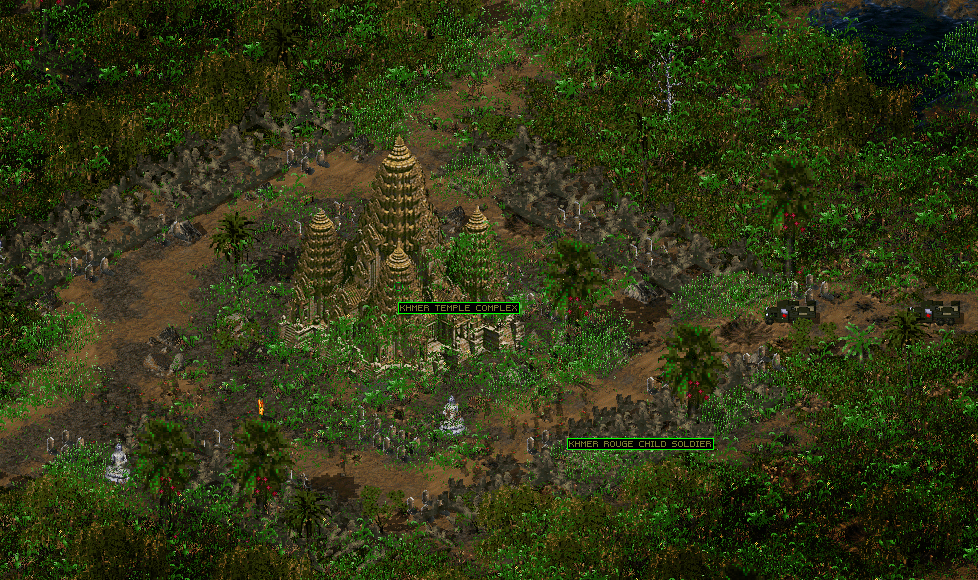 Khmer Rouge child soldiers and other guerillas take positions around a Khmer temple to meet Vietnamese invaders in Cambodia. The fanatical Khmer Rouge of Cambodia and Pathet Lao of Laos can now be trained in certain maps, which expands the game lens to reflect a wider war. (VCO)

The supposedly neutral country of Cambodia was long used by North Vietnam as a base of operations for operations in South Vietnam, who invaded Cambodia with the Americans in 1970. After Vietnam was unified in 1975, dissident Khmer Rouge forces started raiding and massacring Vietnamese villages across the border, igniting a war with Vietnam, who rightfully crushed the Khmer Rouge and freed the vast majority of Cambodians from the nightmarish Pol Pot regime – all within two weeks.

Unfortunately for Vietnam, the Khmer Rouge started adopting the same guerilla tactics that worked so well for them during their war with the Americans. By the end of the Cambodian-Vietnamese War 10 years later, nearly 30,000 Vietnamese had died. This period has since been termed ‘Vietnam’s Vietnam’ and has largely been forgotten even by the Vietnamese government.

Players can now command the fanatical Khmer Rouge, including forcefully conscripted child soldiers, to ward off American attacks or Vietnamese invaders. “As the Khmer Rouge had similar weapons to Vietnam, it’s the only map in the game where Vietnamese can play against Vietnamese and still be relatively historically accurate,” adds Yan. The map features not just beautiful Khmer temples and Cambodian villages, but the grim reality of child soldiers and Cambodia’s killing fields. “I personally walked through the Killing Fields and saw bones, clothes and teeth. I wanted to pull no punches and show what the Khmer Rouge really did there.” 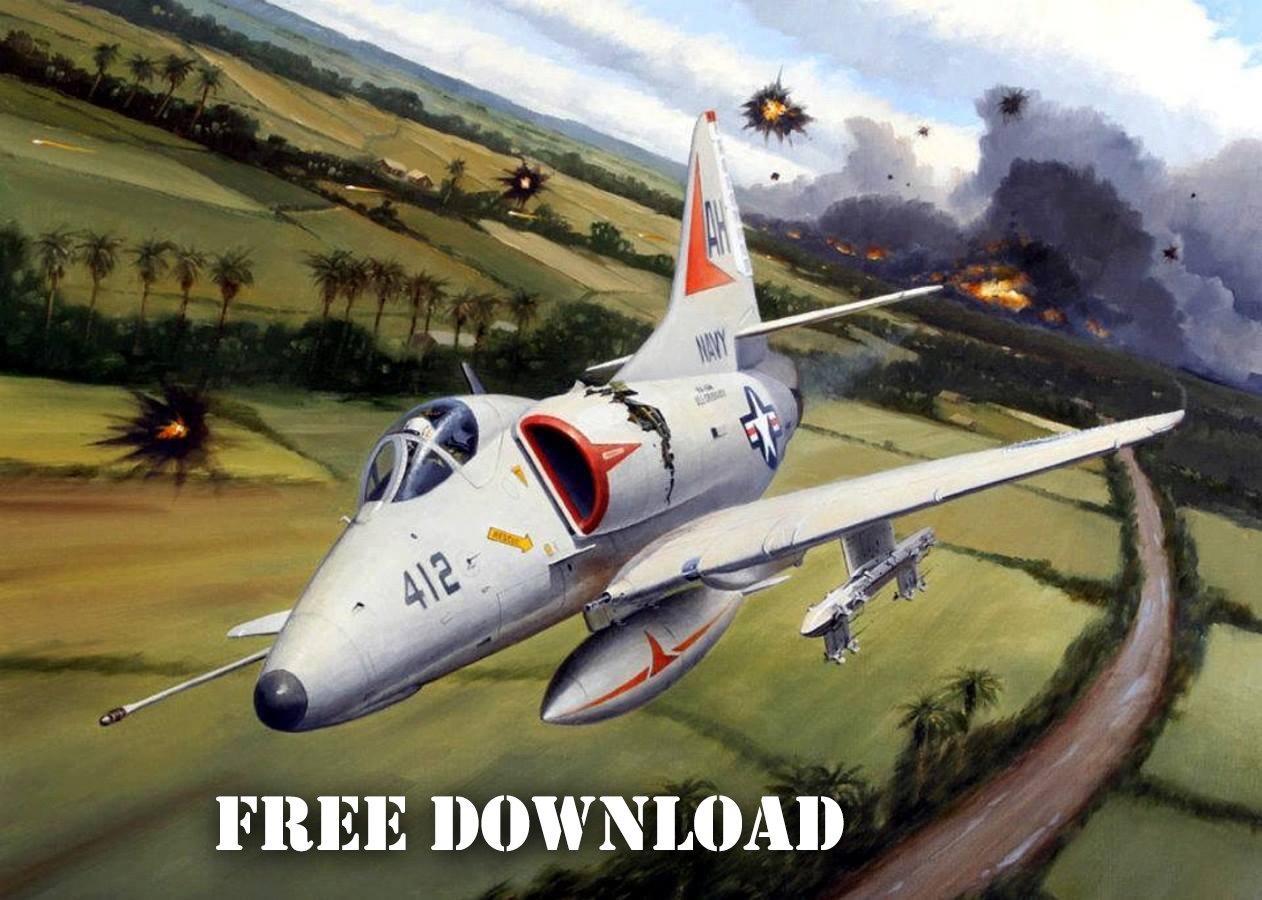 A damaged A4 Skyhawk prepares tries to make it back to the South Vietnamese border as North Vietnamese SAM sites and flak batteries throw steel into the sky. The legendary Ho Chi Minh Trail extended not just from North to South Vietnam, but through the supposedly neutral countries of Laos and Cambodia as well. (Steve Anderson)

Laos, another supposedly neutral country, hosted vast tracts of the Ho Chi Minh Trail, which supplied North Vietnamese and Vietcong troops with men and material during the Vietnam War. The game includes a section of the Ho Chi Minh trail which passed through the misty dirt roads of the Truong Son Mountain Range. Though repeatedly attacked by American aircraft, the trail was never cut. South Vietnam launched an immense raid called ‘Lam Son 719’ to destroy North Vietnamese basecamps in Laos, but was repulsed with heavy losses.

One of the little-known battles of the Vietnam War was the battle for Lima Site 85, where a top-secret US Air Force radar site was destroyed by North Vietnamese commandos. The battle would remain veiled in secrecy until details were revealed decades after the war ended. “The Lima Site, manned by CIA and air force personnel and Hmong troops, can be controlled in the game, which also shows Laos brimming with undetonated American bombs.” Laos remains the most heavily-bombed country on Earth.

America’s air war over North Vietnam is also covered via a scenario called Rolling Thunder, where the full might of America’s warplanes went head-to-head against North Vietnam’s air defenses, reputedly the toughest in the world in the 60s and 70s. 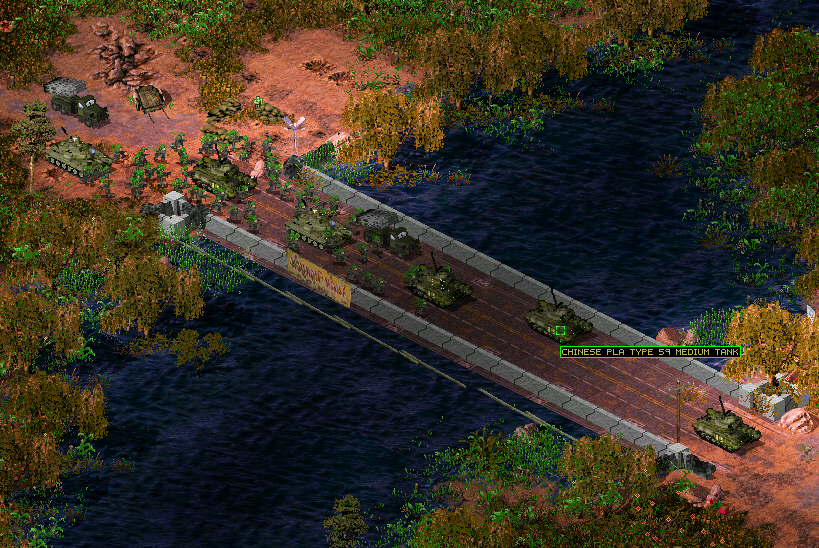 Chinese People’s Liberation Army (PLA) tanks, troops and trucks cross a bridge as they prepare to assault the Vietnamese town of Cao Bang. The Chinese suffered huge casualties against the battle-hardened Vietnamese during the fierce but little-known Sino-Vietnamese War of 1979. (VCO)

China invaded Vietnam briefly in 1979 in a short but bloody war. In February 1979, 200,000 Chinese troops backed by 500 tanks attacked the northernmost provinces of Vietnam. Though they succeeded in taking the towns of Lang Son, Cao Bang and Lao Cai, they suffered disproportionately huge casualties against the better-trained and well-prepared Vietnamese. The game puts players in either the boots of the Chinese invaders or Vietnamese defenders.

Vietnam Combat Operations Wider War also showcases revamped maps and units, adding layers of detail to the original game, which was released publicly in September 2020. “For example, Saigon now features the US Embassy, National Radio Station, Tan Son Nhut Airbase and even a city jail which you can capture to get armed prisoners and a few flustered medical doctors,” says Yan. “The new Long Tan map allows you to train ANZAC (Australian and New Zealand) troops, who famously won the 1966 Battle of Long Tan against the Vietcong. There’s a lot we did to make the maps and units better.”

The expansion pack is the culmination of an 18-year old project Yan began in 2003. “Vietnam Combat Operations uses the Command and Conquer Tiberian Sun engine to bring the Vietnam War to life. It’s a nonprofit educational game for people to experience and overcome the many challenges of jungle-based guerilla warfare, from not seeing your enemies to approaching and controlling potentially hostile towns and villages. Unlike most Vietnam War games which tend to glorify Americans, all sides are portrayed as heroes fighting for their own causes.” 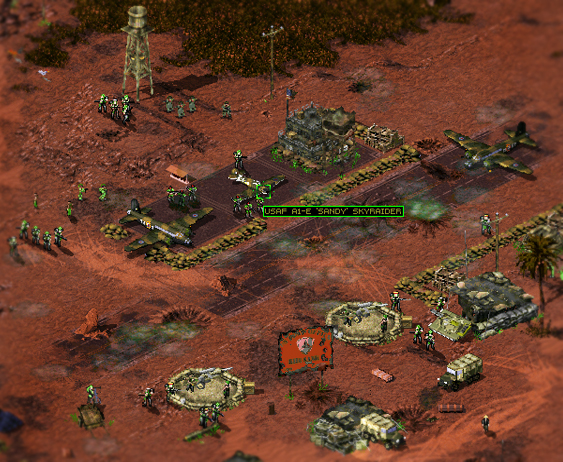 US Marines and South Vietnamese forces at Khe Sanh are relentlessly pounded by North Vietnamese artillery. In reality, the battle of Khe Sanh was a diversion which successfully drew allied forces away from urban cities, successfully paving the way for the famous Tet Offensive, where 80,000 Vietcong attacked nearly 100 towns and cities within two days. (VCO)

The game has received good reviews and though it can be downloaded online for free, Yan urges gamers to make a donation to APOPO, a nonprofit organization working to clear deadly landmines in Cambodia. “In reality, the Vietnam War wrought great misery for the people of Vietnam, Laos and Cambodia. If this game can spur at least one good donation, then it would have been worth it,” concludes Yan. 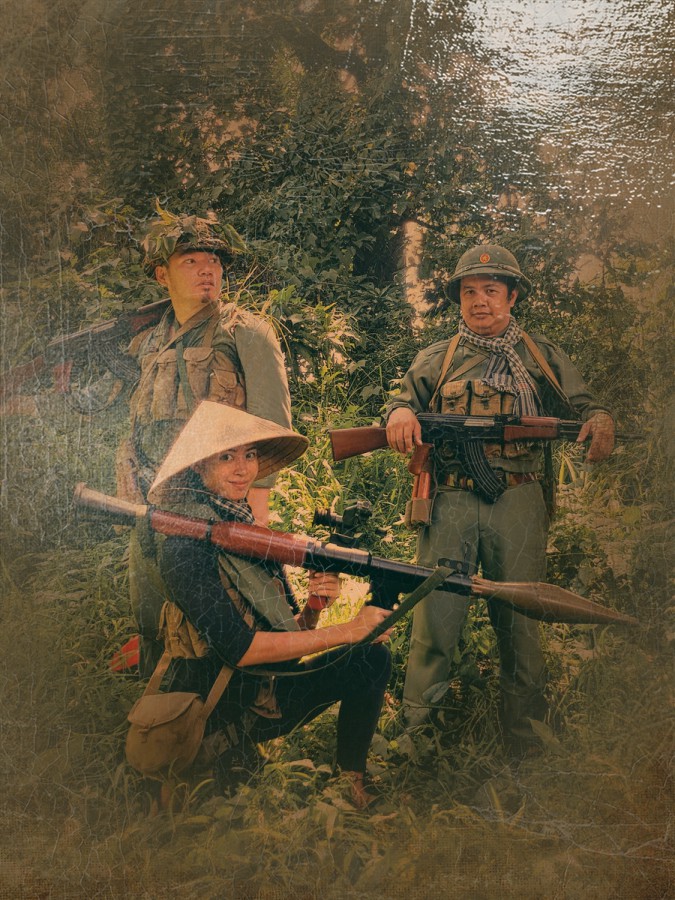 North Vietnam's PAVN and South Vietnam's Vietcong troops battled and won against the Japanese, French, American, Cambodian and Chinese armies from 1945 to 1991. (VCO)

well, time to play "All Along the Watchtower" on repeat and get curbstomped...again

edit: i seem to be missing something. i downloaded the correct file and followed the instructions. but the Batch file only plays the intro video and Aclicker (which is a PAIN because it takes over the computer and i have no idea why it's there for): the game itself does not run. should i just copy-paste the TiberianSun Launcher into the Wider War folder?

You can just click Game.exe to run the game too. The Autoclicker is there for you to train hordes of troops (so you wouldn't need to left click 100 times to train a company of NVA Regulars for example). You can set it to any button you want but it's set at ` .

You can also change the screen resolution by clicking on Tsconfig.exe.

Lastly, capturing various buildings allows you to train more types of units. There's in fact a giant Easter Egg hidden in the game if you capture a specific combination of buildings . . . enjoy!

Hi. Is the expansion in the same download as the main game? There is only two sides to choose from is this correct? Also I cant set my opponents side to vietnam so I keep playing usa vs usa.