Venice was a quite unique region in the Roman Empire. Since the early Lombard and later Frankish invasions, Venice used her advantage being built on small islands. That prevented the enemies to invade the city but its main land was constantly under siege. Venetians had the sea as their only way to communicate with the rest of the empire but the fact that the city was too far away from the Empire’s nearest cities was a bitter reality. Venetians saw the chaos in the Italian peninsula as an opportunity to expand their wealth via trade. So from a time on Venice was de facto independent but officially still belonged to the Roman Empire of Constantinople. As a trade cross road par excellence, Venice received multiple influences from “Rome” (Constantinople), Franks and Lombards. That was obvious in its army and weaponry too. In its militia units anyone could see Roman, Frankish and Lombard armors and weapons. The Doge of Venice was the chairman of the nobles and been elected by the Venetian nobility. In order his election to be valid though the Roman Imperial permission was needed. The last Doge that received such recognition was Dandolo few years before the fourth crusade. The empire knew that could not defend such a distant city too isolated from the rest of its Italian lands so in some point came with an agreement with the Venetian nobility. The empire gave an official autonomy and Venice agreed in an obligation to build war ships for the empire. That autonomy ended the income from taxes from Venice for the Empire. Venice did not had the trade restrictions the rest of the Empire had and the city flourished and expanded its political influence among the Italian cities. When Varion (Bari) fell in to Norman hands as the last Roman city in 1071 AD, Venice continued to exist more powerful than ever.

The army of Venice based on civilians and few profesional soldiers serving mostly as ship armed escort. Also Venice did have land owners and those land "nobles" formed a heavy cavalry unit carrying a banner that refered directly to the Roman Empire. The leaders of varius units had the Roman title of Tribunus. 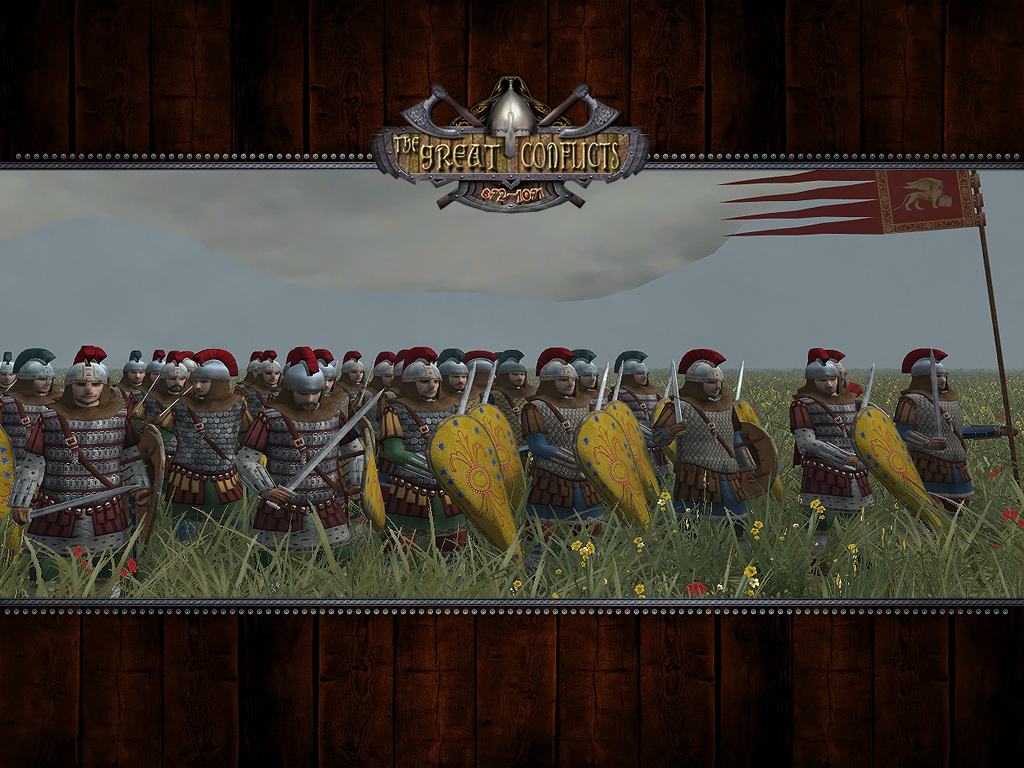 During this period the influence of Byzantium on the Venetian armament decreases in favor of decidedly more Western equipment, but the presence of the Byzantine Court in the material military culture is still clearly visible in the ducal guard, which emulates the 'spatharioi' of Constantinople.
The warriors, used a mix of roman and unique helmetslike Phrygian iron helmet ('galerium ferreum'), the leather cuirass called 'curocia' and above that scale cuirasses influenced both by Romans and Frankish, the 'scutum' of the elongated kite type, and the Norman or Germanic type sword. 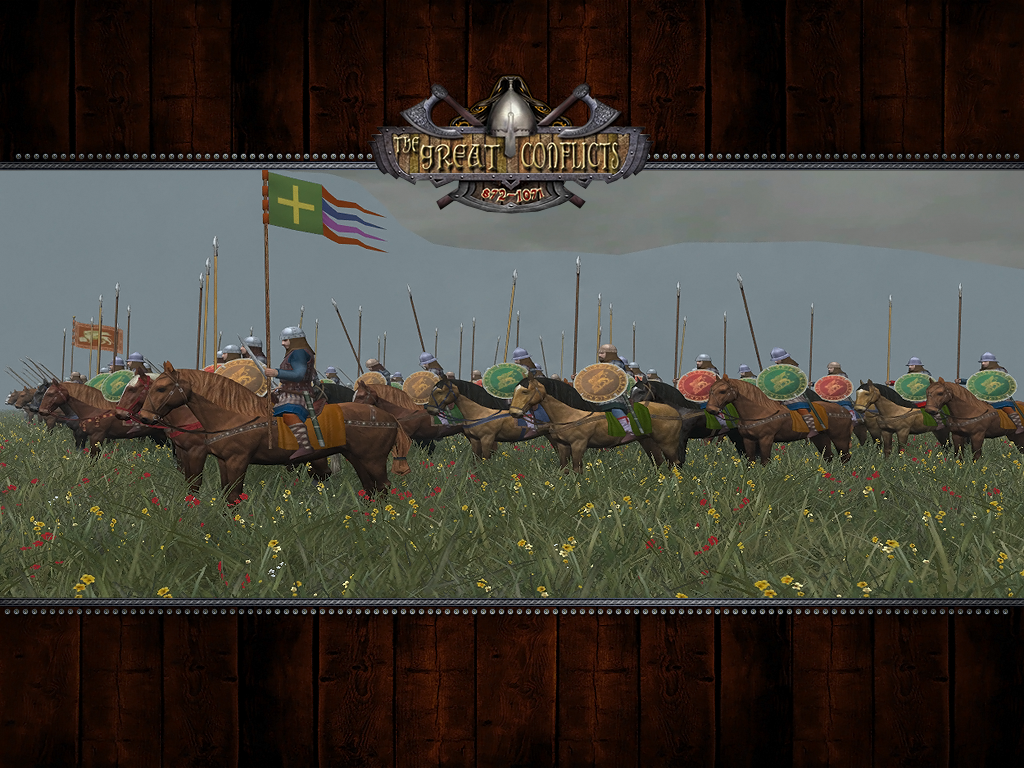 These Venetian 'milites', covered with a lamellar armor ('lameria') of Eastern Roman import , were actual the wealthiest land owners. The Roman-style helmet anticipates the 'chapels de fer' of the following centuries.
The sword ('gladius') is of Constantinopolitan importation.
The flag is similar to the 'bandon' of the Eastern Empire, but its colors represent the first known Venetian banner. 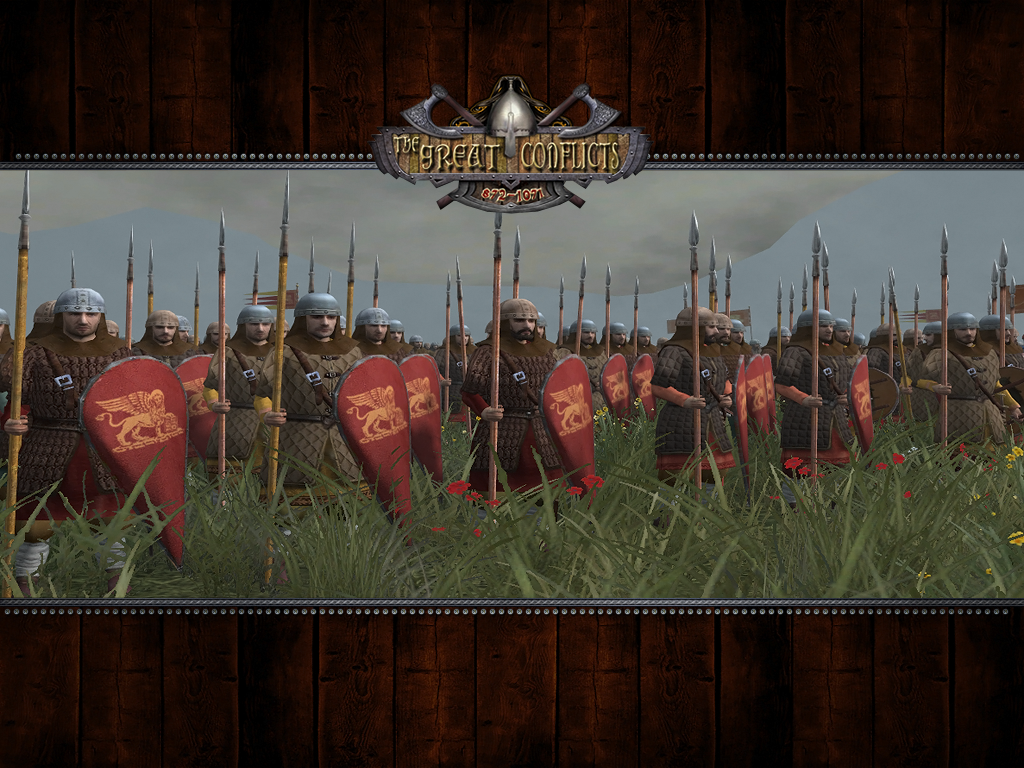 The appearance of these marine infantrymen ('fante da marina'), is still very Roman. Their leather cuirasses ( 'lorica') is of a light type, while on the head he wears the characteristic 'oveta' in cloth, of Levantine type or a iron made casis. The heavy sword ('spatha') and the spear ('lancea') are both imported from the Carolingian world, although the novelty here is the triangular shield of Roman-Eastern origin, on which is depicted the well-known emblem of the 'Lion of Saint Mark'. The Saint's relics were stolen from Alexandria in Egypt and brought to Venice in 828. 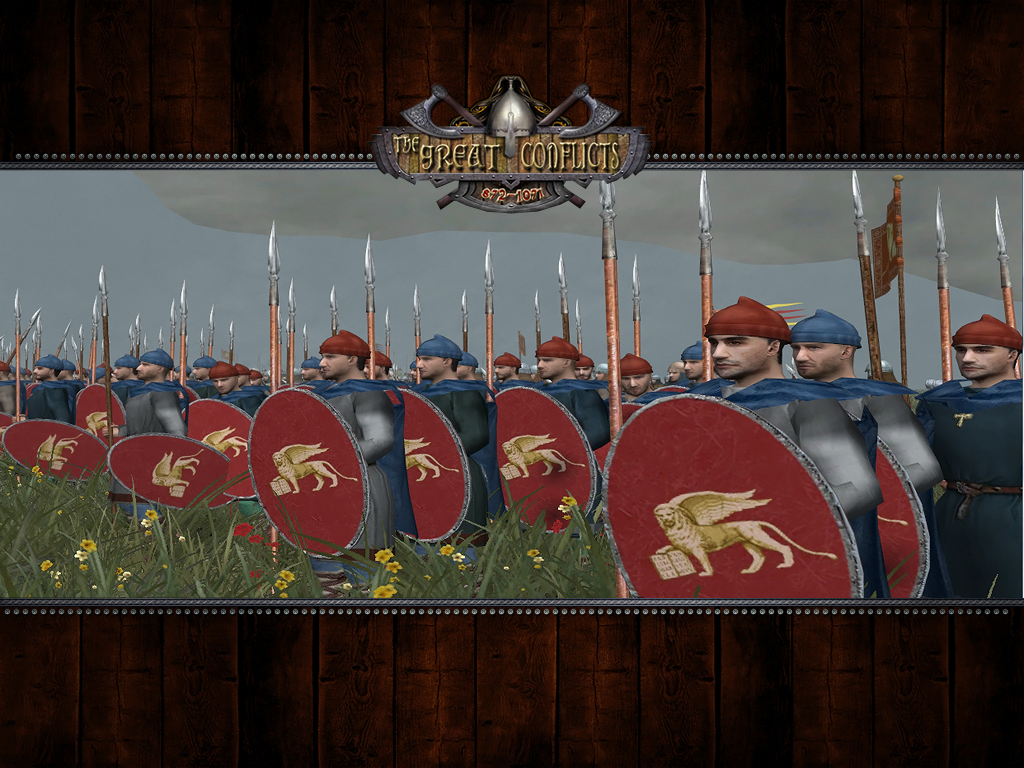 The followers of the military commanders of the Lagoon ('duces' and 'tribunes') are mentioned in the "Historia Ducum Veneticorum" as servants, but they appear to be fully armed soldiers. The cap, or helmet of the Phrygian type ('camelaucium'), worn by the soldier represents a felt version of the metallic helmet and remains a constant of Venetian equipment until the 13th century.
The weapon is a simple spear, even though the equipment shows the patron's wealth of this 'servus' and is the result of the commercial contacts with the Empire capital. 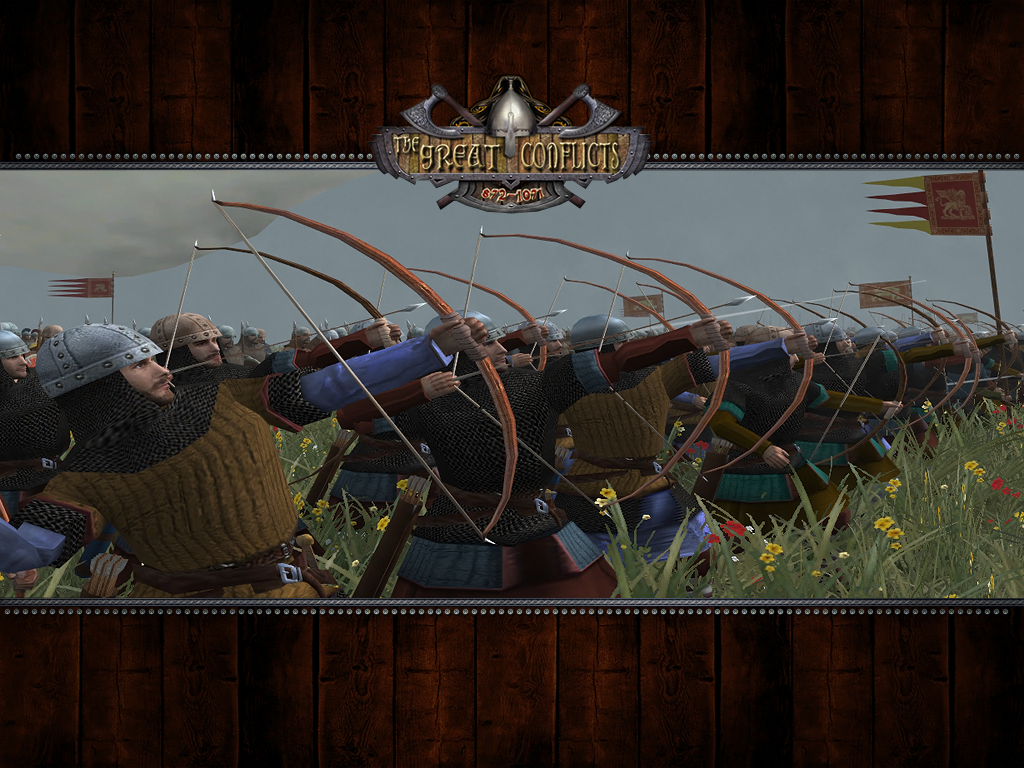 These men are the back bone of the venetian fleet troops. Originaly armed with less armor, trade allowed them to use a variety of armors consisted by the leather Roman padded armor (zuppa) and a short iron chain hauberck (lorica).Their equipment completed with simple metalic helmets and frankish swords.
Their bows allowed them to engage enemy ships from a quite large distance.
That abillity proved quite useful when they also had to defend the city its self. They continued to exist untill 13th century.

Last Venice has access to all four Italian Militia units shown in the Lombard Faction Preview.

CREDITS:
Mr. R.D'Ammato
Diocle (for his translation from italian to english.
Razor for his heads.
Excusatus shield patern by Paleologos
For the units used fragments from textures originaly created by :
Absinthia
Leif Erikson
Final model creation by AnthoniusII