Vault 24 Alpha version 0.3 has been released. It adds the Reactor level and optimizes the Main Atrium level.

Progress continues to be rapid on Vault 24. The past two weeks have seen two small releases, which add a number of new areas, and further flesh out or smooth out several others. Additionally a staggering amount of work was done to 'optimize' the Main Atrium level.

Lots of work was done here, mostly involving building the rather complex, pipe cluttered environments I desired. The bulk of the static cluttering and lighting has been done. What remains is some customization of some of the halls, and the main control area, along with a final sweep of cluttering. 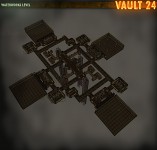 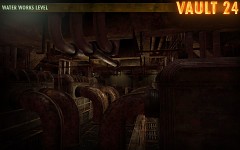 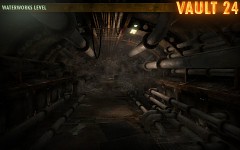 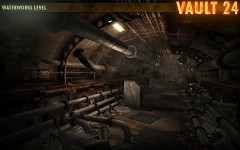 The Storage level is massive, actually even a little bigger than the Main Atrium level. It is multileveled as well, though consists for the most part of two sub storage areas. There are also 16 large storage chambers, which hold the various oils and fuels for the vault. The level is completely looted and ruined, and can be thought of as an internal 'wilderness' area. This area is now mostly complete, requiring only a final dynamic cluttering and of course navmeshing and optimization. 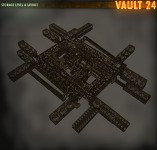 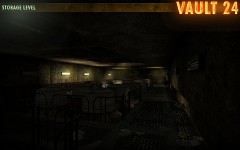 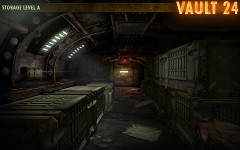 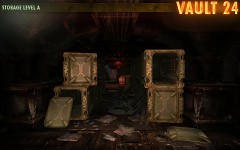 One of the other big levels is the Main Atrium. It is actually pushing the limits of how big a cell can be. Because of the large, 4 story atrium in this cell it was not possible to break it up into smaller cells (or would have been very difficult). I built it hoping that after optimization it would run smoothly for most players, despite its size. With the latest version we can now try this level, and see just how smooth it can be. So far it seems to run well, but the load time is still a tad long. 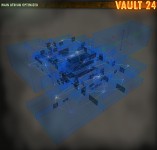 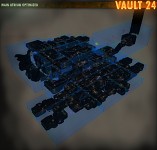 Finally, there is one more new level in the latest update, and that is the Reactor Level. However, very little work has been done here, beyond fleshing out the layout, and the beginning of work on static cluttering.

This looks awesome, probably one of the best looking mods for fallout new vegas ive seen... gonna have to DL this.