The United States of America are the next fraction to come to IS! Take a look units, technologies and historical characters.

Posted by QuintusHortensius on Dec 7th, 2014

Here is the next preview for the next fraction which will be added to IS-RotR:

the United States of America!

First, the bad news: The US unit rooster will be very limited at the start of the campaign.

Now, the good news. you will have greater variety of light infantry units to recruit than European factions.

The US campaign will be very challenging!

After the the American War of Independence the Continental Army was
disbanded and the regular United States army had a strength of only 1
regiment. This "early" late era will be a period where your access to
regular army units will be limited. It may be advisable that you not
start a war with anyone!

As you developed your technology and knowledge, you will be able to recruit the Legion of the United States; a well trained army capable of fighting in open terrain and along the American frontier.

Furthermore, you will have historical generals like Nathanael Green, Anthony Wayne and Arthur St. Clair. 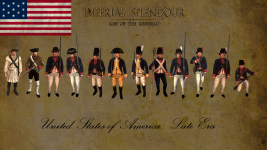 At start of the campaign you have access to the historical government of the United States:

Secretary of the Treasury: Robert Morris

Secretary of the Navy: Gouverneur Morris


The United States will have their own army and
philosophy techtrees to represent the unique development of the United
States during the late 18 century.

The Philosophy Techtree is divided into 4
different parts. At first there is the scientific advance like "Learned
Society". The 2nd part are general political ideas like the "Federal
System" and consequently the 3rd the acts to transform the ideas into
laws and politics. Finally the 4th are economic ideas and measures. 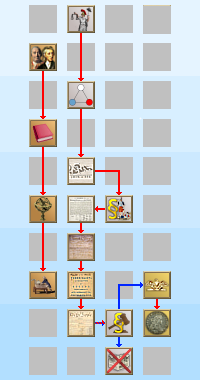 
As the US did not launch a great army or great
army reforms in the late 18th century your option are limited here:

7.2 Regulations for the Order and Discipline of the Troops of the United States

10.1 Legion of the United States


Be aware that the Constitution is THE keytech for both the philosophy AND army techtree!

At last the United States will have a unique prestige building:
The Capitol! 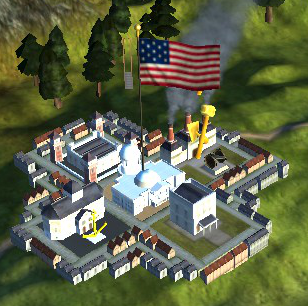 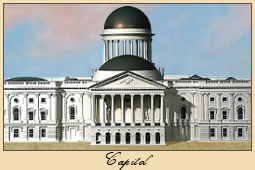 The model is made after the original plans of Dr. William Thornton and does not represent the today's building.


For more Information and discussion check out this thread: Twcenter.net

Is "burning" the Whitehouse an option should Britain capture the capital?

No it's not. Generaly all building slots have a smok effekt if the building is damaged but we decided against the White House as prestige building and for the Capitol.

hey Any idea when this next update will be released? also will u guys be able to fix the Britain late game tech tree? i cant go past a certain point in it, love the mod btw :DD

Nope there is still a lot of work to do, but PikeStance the new Mod-Leader is testing a new beta Campaign AI:
Twcenter.net
Furthermore I hope you won't recognize the British Techtree in the next release.;)

what is the estimated release date for this? Cause I am so excited for this mod.

Any other updates to when US is goin to be out for a faction?