A quick update regarding progress, a new concept art piece and a link to the first ever Will to Survive news story.

It's all hands on deck at the moment with the Kickstarter begin date looming on the horizon. I've been hard at work putting things together on that front, there's pitches to write, press to pursue and videos to get filmed. I took some time away from all that craziness however to get a spot of concept art done. 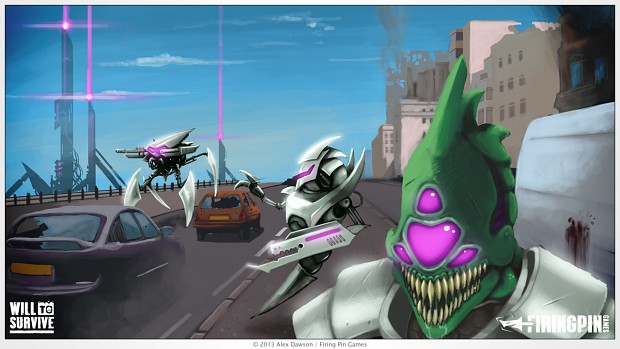 I also wanted to show the large alien structures the invaders have built which now fill the horizon. They use these to steal precious resources and they don't like that Will is around because he'll be grabbing those resources too.

The game has also had it's first news feature, I sent the prototype build over to Chris Priestman at Indie Statik so he could get a hands-on and see how it currently plays. This is what he had to say Indiestatik.com

I'm hoping to get a few more concept pieces up this week as well as looking into getting the iOS, Mac and OUYA builds up and running. I'll also look into filming the game running on Mobile so you can see how it looks in comparison to the PC build.

Very good conceptual art, i like the alien design.

Thanks, in the beginning it took a while sketching different creatures before I found something I was happy with. I would still like to concept new types and possibly improve on the existing ones in the future, variety is the spice of life after all :)