It has been quite a while since anything happened here but we are proud to post our latest progress: New art style and character concepts as well as a story/setting update.

Hi everybody, Klonk-Games is back with a fresh update on our student project! It has been very quiet on indieDB but now we can present you brand new content including a new art style and other cool stuff.

First of all I like to point out, that we have been and are very busy right now. That's why it has been such a long time since we started posting stuff here. So lets get into the update!

Although the old jungle theme was looking pretty neat, we have never been really happy with it fitting in the game from a game design point of view. When we designed the 2D version, Klonk-games.de, we have never had a great story built around our mechanics. It has just been a standard thing: Two alien-like characters on a foreign planet trying to "escape" from it. Our focus was definitely the cooperation between them and creating dynamics to support that. So we had three different types of stages in the flash version:

Those objects were supporting our shift-mechanic and therefore we decided to make four different stages, each of them consisting out of a sequence of levels. There was a tutorial stage, the crate, seesaw and box stage. All of them where fine for themselves, but there was no real connection between them. They felt like they were just put together. There was no real story for the player to experience, just cool mechanics and puzzles.

So when we started our 3D version of the game we kind of did the same thing but we wanted to create a meaningful purpose for the two characters. We still went with the escape story, but we said we want to make it clear that those two are not belonging there. They wanna get away from it and we wanted to create a difference between characters and environments. Therefore we wanted to have robots, who are "mechy and techy" moving through an environment that is organic and living.

We also decided to go for a stone-temple theme with different temples where we could have a fire temple, water temple or something like that. From a level design point of view this just made sense because we wanted the players go through some kind of progress and teaching them step-by-step in which ways you can use the shift mechanic.

However, the jungle setting meant a lot of work from an art design point of view and since we have limited resources we needed to come up with something different. 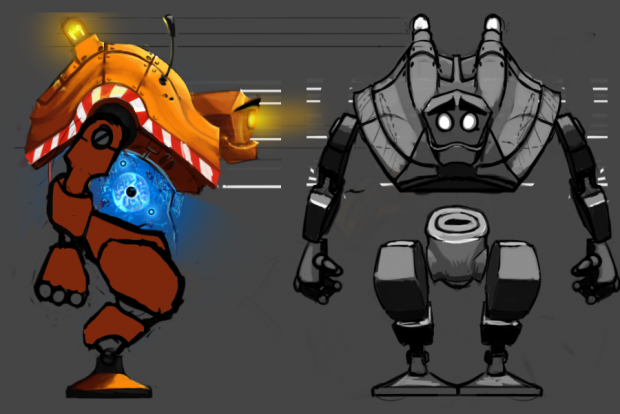 Our story now takes place in the future and our two heroes are robots that are manufactured in a big factory. The factory is lead by a very successful company called “Robot Dream Mechanics” that has lots of workers. It is supposed to be a fictional company that just serves as an end in itself. The model-product of R.D.M. is “Nothing”. It’s a product that has to undergo a huge working progress with lots of administration efforts and costs. R.D.M even produces their own machines and robots to help with the production. The company has several sections like staff, storage, logistics, research, development and a cantina. Everything is lead by bureaucracy at its craziest form. The fact that
every little detail has its own control mechanisms makes the work and R.D.M’s employees very inefficient. Every day is boring routine.