I just wanted to write a quick news post since Spoxel is on IndieDB to let everyone know what the status of the project is.

I just wanted to write a quick news post since Spoxel is on IndieDB to let everyone know what the status of the project is. Spoxel is currently in what I would consider Alpha and quickly progressing towards beta. Most of the major game systems such as multiplayer, combat, world gen, item creation, and world simulation are in place and I am continuing to flush out those features as I work on content.

At the moment I’m in the middle of a huge pass on the spell crafting system for Spoxel. The idea behind the spell crafting system is that you use a number of runes to create spells. The four separate types of runes are targeting, effects, mutators, and mitigators. Examples of targeting runes are projectiles, AoE, and beams. The effects are what the spell actually does such as damage or causing the target to become invisible. Mutators allow you to modify the targeting runes and the effects by boosting them or changing how they work. For example you could mutate a projectile targeting rune to cause it to seek after an enemy. Mitigator runes allow you take tradeoffs when building the spell such as decreased mana cost but the spell now incurs a cooldown or has some sort of backlash.

I’ve already had a couple of cool spells come together that I didn’t initially envision such as a Jump pad spell which targets a location and will launch anyone who walks into that location into the air. The big thing on my plate right now is allowing you to use advanced effects such as looping or conditional effects. For example, you could create a projectile that will damage an enemy but heal other players or create a spell that launches multiple magic bolts at a target. You can see part of that UI revamp below. 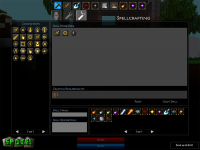