A short status update about the current progress and information about the English synchro!

I noticed that it has been already five months since I've made the last update, and because the mod of the year awards are also taking place in these days, I decided it would be a good idea to post a short update! And I have good news for you.

The mod itself is basically finished. All four maps are finished in terms of leveldesign, AI, Flow Graph, cutscenes, etc. and can be played consecutively. All that's left to do is a beta test to find all the bugs and gameplay flaws and fix them.

Also, I'm currently working on the English synchro. I found very talented voice actors from the U.S., Canada and the U.K. who record the dialoges and will make the mod alive.
Unfortunately, it's very time-consuming to manage all the voice actors, check the recordings and integrate them into the game, and I can't say how much time I will need for this. I don't think I can finish it this year, and I think I will need until february 2015 because I will probably not have very much time until then. But I'm doing my best and will keep you guys updated!

Here I have a little screenshot from the last map for you. It's only one because there are basically no other areas to show without revealing too much. 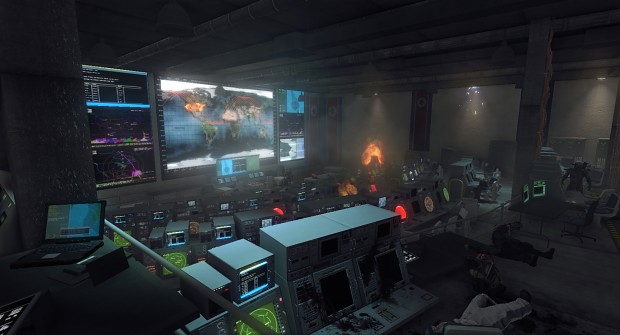 I hope you guys liked it! Thanks for all the support and feel free to leave a comment or vote for NC!

great! yeah its difficult to work with different voiceactors who do it for free, i hope you get all takes together in time.

Glad to see things are coming along well. Thanks for the update.

Looking forward to the final product. I'm planning on streaming it!

The next big step will be in about two weeks if everything goes well. I'll let you know! :)

Yes, there are actually good news. I'll try to post an update this weekend with all the new info. Stay tuned :)

Soon my friend :D Maybe I can get out an update this weekend, but there are a lot of things going on right now. Also, I had no Internet in the last week due to a storm, which really slowed me down...:(

Can't wait, hope everything is workin out for you!