This is an update regarding the progress and production of Unknown Entity: v3.03 has been released.

The third revision update is here!

The third v3 update includes store functionality, the experience system, and difficulty. The fourth v3 update will be the last alpha update of v3 and will include saving functionality plus some bug fixes. 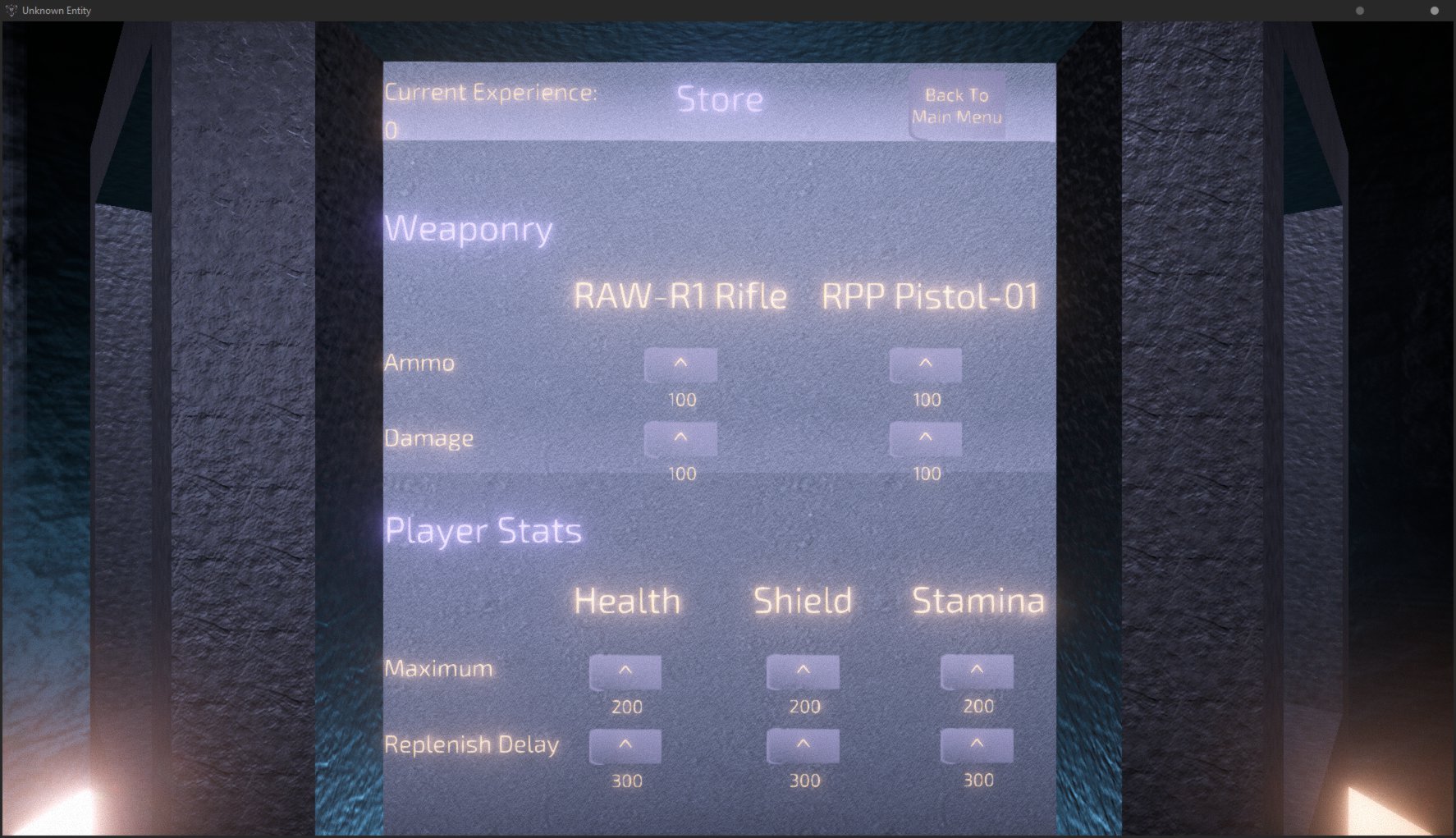 The v3.03 demo includes a store (based off of in-game exp, not real currency) for the player to upgrade their stats. These include maximum health / shield / stamina, recharge delay of health / shield / stamina, ammo of the player's pistol / rifle, and damage of the player's pistol / rifle. The store uses experience gained when playing the game. The menu is set up in a grid with buttons corresponding to their column heading + row heading, and the text below each button displays the cost of the next upgrade. This text will read "Max" if the upgrade is maxed out, and the button will be disabled.

Experience is earned by completing objectives (Repair - 5; Entity kills: Prismatic - 10, Spherical - 15, ROD - 20, Rot. Pyr. - 25, De.Bo. - 30) and completing the level (50 * [ difficulty score ], anywhere between 100-750 in increments of 50). Experience is kept from a level even if the player dies; they simply will not earn the level completion experience. Experience can still be earned replaying levels.
Pick-ups & Difficulty 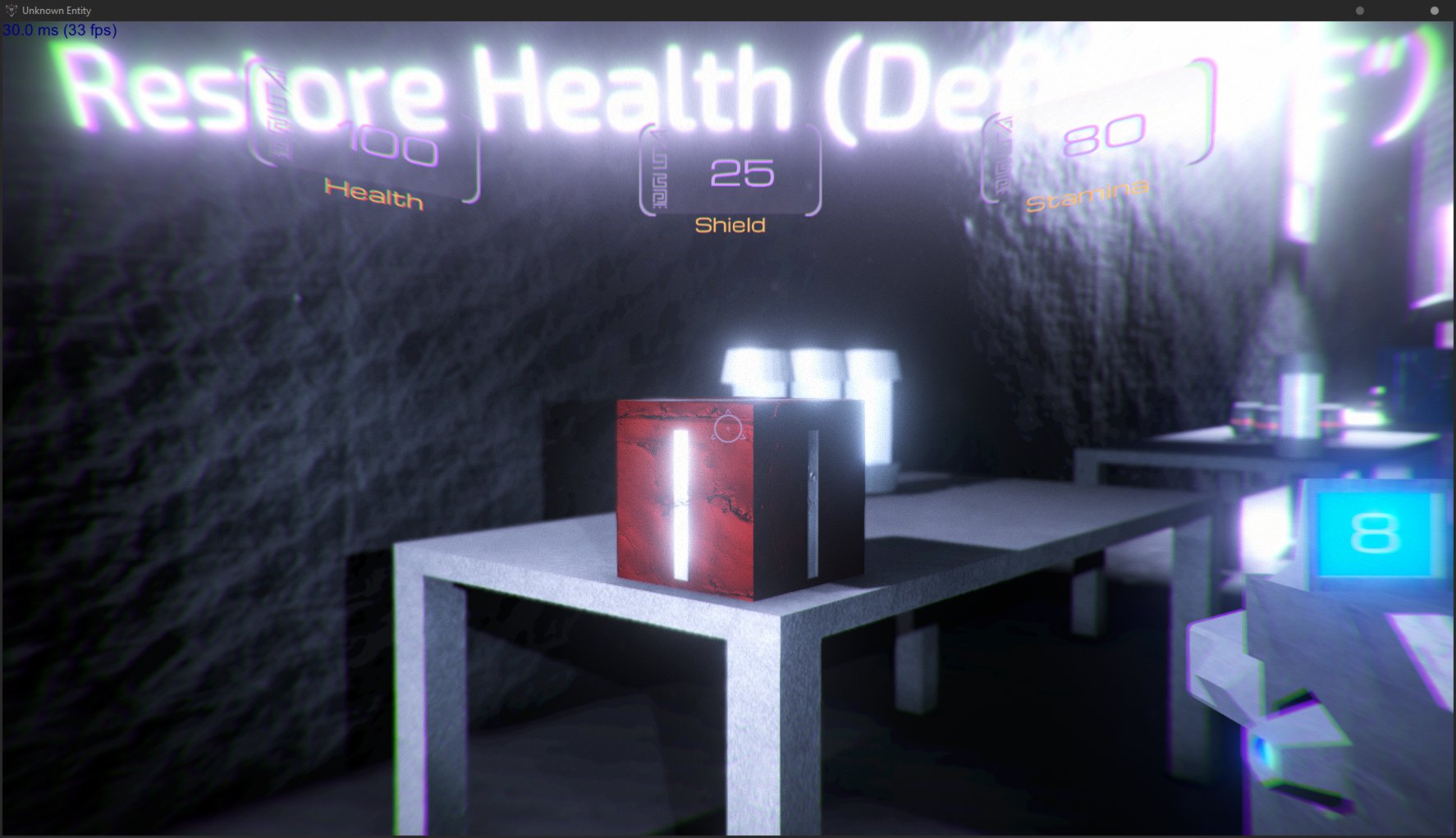 Player pick-ups are now in the game. These will restore values of the player's health, shield, stamina, or ammo (pistol or rifle) to whatever their current upgraded maximum value is. They are not destroyed after usage, and show up on the minimap.

Difficulty has been added to this demo. The player can set difficulty in the settings menu from 1-5, and each level has an escalation difficulty value from 1-10. These two values are added together to give a difficulty score, which is used to determine: the experience gained from level completion; entity AI (speed / rotation speed); entity stats (damage / health); and player stat recharging rates.
Additions & Changes 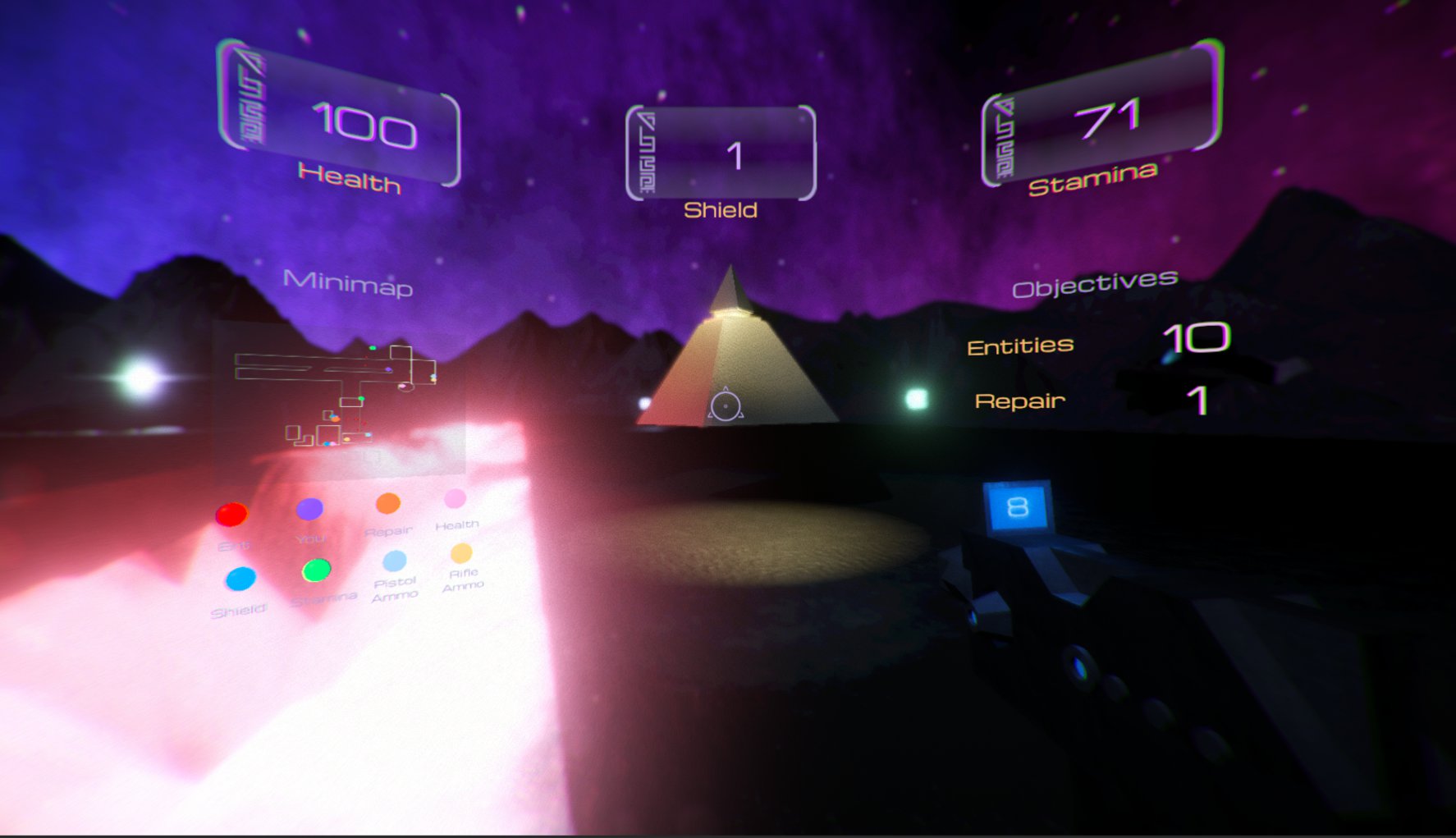 The damage-over-time entities (i.e., the non-projectile-based: ROD, Rot. Pyr., Death Bot) now have animations for their different components. The ROD and Rot. Pyr. rotates their base and top parts opposing each other. The Death Bot: raises and lowers its "spikes," spins its upper and lower disc in one direction, spins its outer core in another direction, pops its outer core shell out into four pieces, and raises and lowers its inner core sphere.

Quite a few bugs have been fixed (about 6 documented in the roadmap - 0013 to 0018). In addition, the rock and terrain detailing has been slightly altered, and the base lamp lighting and some cutscene-ship-lighting have had flares added.

The entity AI has been changed as well to allow for entity roaming and targeting the player when the player fires upon the entity, as well as its base-stats & a difficulty-affected pre-determined multiplier to affect its AI and stats.