Hey guys, just a bit of an update of where we are at the moment.

Today the we bring you a status and update for the Far East War on Steam. We also bring some of the things we have added onto the mod.

Firstly we want to thank all of you guys for voting for us on steam greenlight, we had a very fast greenlight faster than we all thought it was going to take to be greenlit. 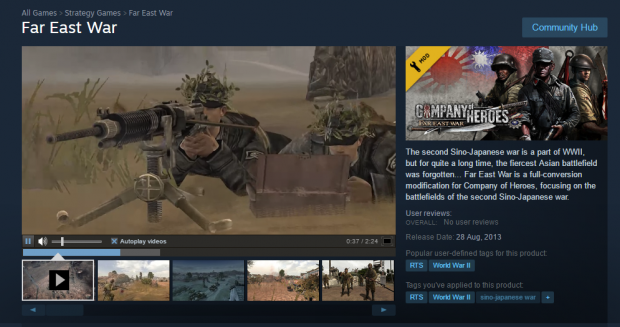 We have added you things to the mod. At this moment for the steam release the team is working to try and debug the mod as best as we can. With many if the bugs that have been found have bee fixed, we hope to get all the bugs removed before steam release.

The other main thing that we have added is Reward Units. We have focused on adding reward units into the mod to give players different types of strategies and different ways to play. This will enhance the gameplay of the mod.

Maps we have focused on adding 1v1 maps onto the mod. we hope to have at least 5 1v1 maps in the steam release. We also have fixed some of the current maps in the mod. A Lot of debugging from the maps will and have been done (we don't have a professional/great mappers but we try our best)

Lastly we are looking for community maps. if you are interested to hand in your map please comment below. (Just comment if you have a map even if you dont think its that great)

Till Next time solider!

_RedHawk and from the rest of the Far East Development Team

thank you for your work.

Thank you for the support!

Will the new version be released here too?

Yeah it will, we can't leave the people that don't have steam stranded ;). Thanks!

will there be new units like tanks or infantry with later updates?
or other fractions like russia or the us forces?
one last thing keep up the good work and thanks.

Nice! Really excited for the update.