A new character, new animations, and playing around with a dash.

Welcome to our 13th update!

This week was mostly dedicated to optimizations on the code side - making sure to keep things running at a non-cinematic 60fps - and character polish on the art side.

Since most of the core features - rendering, animation, input, sound, pathfinding, ai, loot, destruction, etc. - are either in place or over half-way there, we are actually starting to add a bit of polish, wrapping up some lose ends, basically going from a prototype to something that feels like an actual game, and slowly getting ready to start putting the demo together :)

Anyway, since I doubt many people are interested in screenshots of performance profiling or finding out how many micro-seconds a particular system takes to update itself, I’ll skip over the optimization stuff and go straight to the character part…

First things off, we have a new character, The Don! 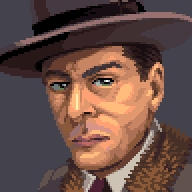 Most dystopian societies living under the oppressive rule of a dictatorial regime have a thriving underground economy and the Tower is no exception. The Don is the go-to character if you need a favor (or massive discounts at the shops), however be prepared to lose a limb if you get on his wrong side. His weapons of choice are the Tommy Gun, which he uses to mow down enemies and fellow team members alike (accuracy is not his forte…), and handy hand grenades.

Also as I mentioned above we are starting to wrap up the lose ends such as missing animations, and more specifically in this case, the shooting animations:

And finally since all that profiling and optimization was starting to get boring, I also went ahead and started experimenting with the dash ^_^ (the effect is a work-in-progress).

That’s it for this week, hoping to see you all again next week for more!

The dash seems invaluable. But it also seems like something you have no reason not to do. I'd suggest like a "Dash Energy" or something. So people can only dash like 5-10 times back to back and then they have to wait for enough of the energy to dash again.

Everything else is great. =)

Oh yeah definitely! The last thing we want is the dash to be used as a "bunny hop", it's just easier to test this way ^_^'

The Don should smoke a cigar, or at least have an idle animation of smoking :)

I also agree with the "dash energy" limit that is mentioned by TemplarFreak!

Maybe we'll take it away from the Diplomat and give it to the Don :)

Would be cool to see a time lapse of you making some of the pixel art :) PS: Looks great, just as usual :P