Courage is a upcoming army stat in the Fifth Horseman mod. Like all stats, the Courage stat will be displayed on the army information page. Courage differs from unit to unit, depending on how brave the soldiers are.

Courage will be displayed in the top left corner

What does Courage do?

When the courage drops to 0, the army will become terrorized and be unable to attack

Certain armies are more menacing than others. Their attacks will rend extra Courage when they strike, reducing the courage of their opponents in battle and force them to leave the battlefield sooner. 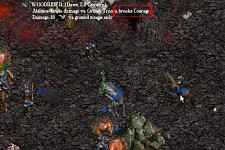 The Woodrider's new ability is to rend extra courage with each blow.

Courage will also be increased through upgrades. There will be various upgrades to increase courage and certain units will start with extra or less courage.

Great idea! They will fear my undead hordes :3