I'm really tieing down Salvage Storm to make it the Unreal Gold mod it should look like. 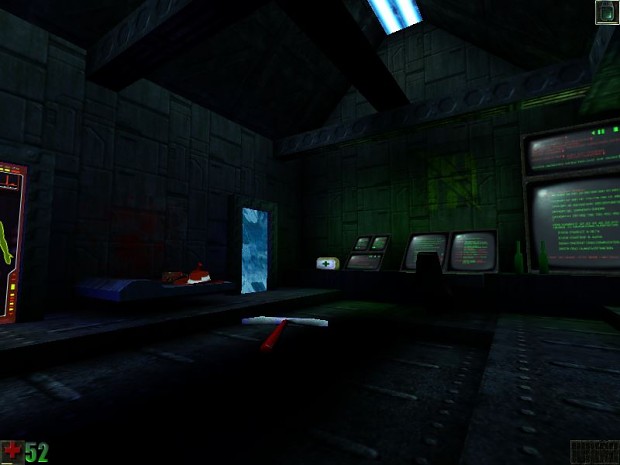 With DX Revision inspiring me to get onto any marketplace, I do wonder why they even got onto the marketplace. DX Revision requires DX and many players can relate to it because it looks like Deus Ex with a few extra models laying around with a different feel, just adds a bit more to the world in that game. So I wonder how my mod does that? So the first level of my mod will be the first level of Unreal Gold but the player will find this scene!

What is this? Well here's what happens when the player walks into it. In Unreal, the player starts the game escaping from a prison cell, which forms the story of the entire game, however in this mod, the player will walk into a time machine soon after escaping and would find themselves in another time zone. Music wise... that's the original Unreal Gold soundtrack, I have trouble placing music in the game, so the best way is to maybe make another revision of the movie, just more of a Wild West themed music using the Unreal chords. I'll see. I thought it was funny placing the original music in there.

Also, if anyone wants to know, one of the major reasons I wanted to spilt the weapons into a standalone mod before releasing the total conversion is because I have problems trying to get the weapons onto my own custom models. Yes, from the video, I do need to tweak the size of the weapons because I plan to make the weapons for Multiplayer matches but it's no good making custom models and not attach weapons on them. Players need to know what weapons the other players/bots are using using a game. This allows them to understand what to do next and etc. Helps with gameplay. It is the reason I've spilt the weapons just for a standalone download because I couldn't find the way to get the models on the custom models before really polishing the mod until next year.

I'm fully aware what the problem is. The model need a joint which the Unreal Engine can recognise to allow weapons to appear on other weapons but it not listed anywhere online.0 I haven't checked with Milkshape yet, so I'll see. Usually 3DStudio Max does it but I want the idea of getting a low end modelling to do this, not an high end model program. There's no tutorial out there which explain how to any of that. All there is, is too make a custom weapon and place it into Unreal Engine, not make a custom character model to hold weapons. There's nothing about custom characters holding weapons. Then I wonder if Epic Games even want custom models to run around holding their weapons their maps back in 1998 or the weapons for all the characters. So I've decided to plan to release the mod without my custom models, but when I get those models armed, then I would release the custom characters as an add-on also. It would make sense while the option is there. Either way, it would make more sense if the player takes the game originally like Unreal with the original characters but would find themselves in another (possible) era of the Unreal Universe which tells a completely different story, with different enemies, visuals and setting while it still looks and plays like Unreal. It's all for fun anyways. It would make it feel more futuristic with the time machine idea to link Unreal Gold to the 19th century. Hopefully that should work.