Now that the shock of having Turnover’s KickStarter funded is wearing off and the excitement of the next step is settling in, it seems to be a good time to make a legit devblog post about Turnover. It’s been a while!

The private backers-only devblog is up and running and I have begun posting regularly to it. I hope the information there has been interesting so far. Everything else related to the campaign is waiting for the funds to clear.

I have put PR aside and I’m dedicating time to moving Turnover forward. For the near future, things may seem quiet regarding development. The truth is I’m hard at work.

Recently, I have been reading through Game Engine Architecture by Jason Gregory. Even though it can be console centric at times, it is one hell of a book that gives a great overarching breakdown of what goes into a game engine.

Inspired by the book, I spent the last week or so improving a number of different parts of Turnover’s engine. The goal is to ensure that Turnover is as stable as it can be, putting what I learned to use.

I rewrote the drawing code and folded it into a RenderManager class, sort of a one stop shop for most anything related to drawing and screen effects. Rewriting this let me get around one screw up that I had been wanting to address - the ability to change graphic settings without restarting the game.

I revamped a number of other parts related to file handling, input, resource handling, and more. The goal was to address hacks, fix bugs, and remove redundant code. So far, everything has been a success.

Next, I’d like to refactor the collision code. It runs well for what is required, but I still feeling like it can be improved for future use.

Usually I play Turnover in piece meal, testing levels and gameplay concerns as needed. A few weeks ago, I realized that I haven’t actually played through Turnover as it stands in a long time. So, I decided to give it a go. As it turns out, I think the game is in a good place right now. I feel pretty confident that I “pulled it off” and I’m happy with what is completed so far. What a relief.

Now the eternal question — will others think it is fun? I’ll try not to stress over that question too much right now, there will be plenty of time for that down the road.

I’ve addressed most of the issues post test and have given the newest build to a tester. While I’m waiting for feedback, I’m moving onto more level work. Right now, there are roughly 10 more levels to create, cutscenes to be made, and art to be finished. In so many words, the game is still in the heat of development.

I’ve been going back and adding some depth and detail to some of the more stale sprites. Just want to give a couple of examples. 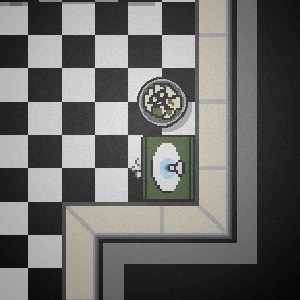 Here’s a can with some added depth.

Here’s some more depth added to a PC console sprite.