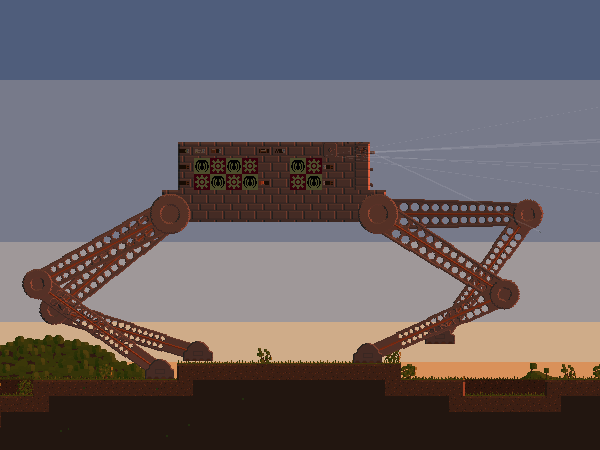 The challenge with landships is that they require a much more detailed interaction between physical objects. Until now, the only interactions that mattered were collisions as well as buildings and grounded ships sitting motionless on the ground. Walking, on the other hand, is a pretty complex interplay of movements and forces, and so it's taken me a few weeks to adjust things properly. A partial list of considerations:

As I previously mentioned, the fact that landships can't tilt means that they have quite a bit of difficulty navigating slopes. I've generally compensated for this by making their legs and tracks pretty huge, but that in turn has led to some weird behaviour like giant war stompers gracefully tip-toeing across the treetops. Finally, though, it's coming together.

Beyond leg physics, I've also been improving the particle system, allowing particles to stick to ships and other places as decals. Explosions, impacts, mud and blood splatters can now all dirty up your ship. Did I say blood splatters? Oh yes, trampling enemy troops is now a thing that works:

Another kind of particle I've added is snow, and to make that more complete, there's now snowy landscapes: 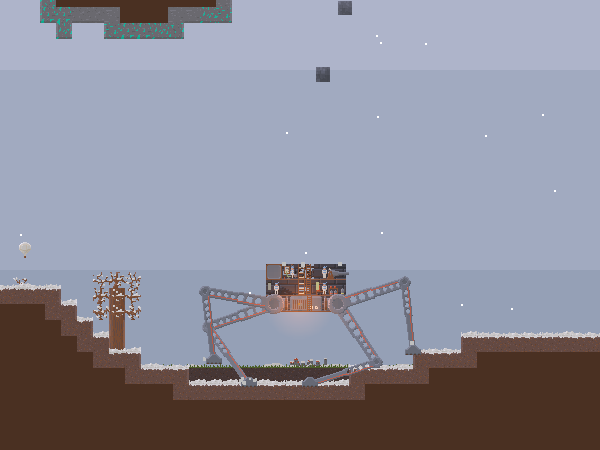 So what's next for dev 7? With legs pretty much working now, it's time to pay some attention to tracked vehicles. Finally, I want to instill troops with some basic ideas about navigating the ground. This lets them board buildings by simply dropping to the ground and running in, abandon crashed ships, and reinforce their comrades elsewhere.

If they don't get squashed beforehand, that is.