Post news RSS Tribe Of Pok: Improvements made to the combat UI

What I've been working on to make it easier to select units and targets when in combat.

Posted by PokingWaterGames on May 19th, 2015

Been working on battle reporting lately. When a Pokian swings an axe, throws a spear, causes damage or gets attacked the event is recorded. Information about each hit can be found by hovering over the actions in the query panel. Damage to weapons and clothing durability are also recorded.

To go with this, I made some combat mode improvements to how unit and target selection work. You can now also specify which Pokians you want to choose to move, even if there are multiple standing on the same tile. Right-click the name to de-select that Pokian. 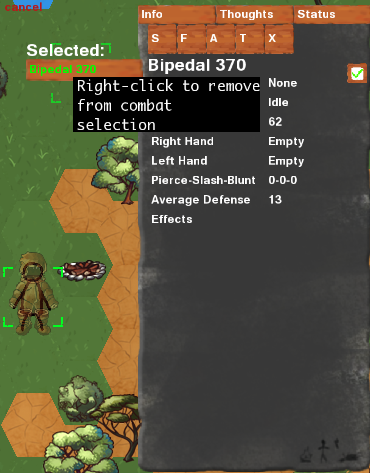 Then when you click on a hex with possible targets, a pop up appears allowing you to select which animal to attack

It's also more obvious when you've entered Combat Mode now. Battle music will start playing and the UI changes colour. I've also made some menus and panels auto-close when switching between modes to keep things clean.

Some other improvements to combat: