Trappedia? Trapcyclopedia? Trapedia? Well, however you call it, this update briefly discusses the arsenal at your disposal in the mod.

After some playtesting sessions all traps have finally got their „character” fully set up it's about time I familiarized you with armaments at hand.

A quick definition – a „dynamic trap” is not a trap in the very sense of it (some of them could hardly be considered as such), but it's used for the sake of simplicity and integrity – generally it's a device that is buildable almost anywhere on the map and is an obstacle on the rebel team's path.

Without further delay I present you the „Trapopedia”, or rather the first part of a short compilation of all available buildables (aka traps) at hand. 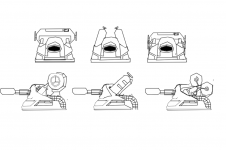 Flamer is the bulk of your defense – this large trap has the most health of them all and is a
perfect area denial weapon. When placed, it will wait for any hostile target to walk in its range and then will spew a river of flames in their direction. This attack deals damage depending on the time
one spends in the fire as well as on the distance, therefore they will be barely hurt should they touch the tip of the flame, while on short range it can and WILL be devastating. This is why the Flamer is always on the front lines, and always the first to be targeted by any hostiles. 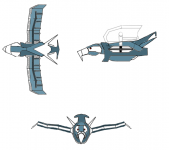 The ultimate offensive weapon – can only be set up outside of the rebel's view, but once somebody gets into its range the Pigeon will carry out a suicidal, homed attack which can only end in it blowing up. This trap benefits from range – it cannot home on anybody too close to its position, but will deal an incredible amount of damage if it flies over a long distance. It's honourable enough, though, to give you a warning – an annoying beeping sounds as it closes in...

Random fact: During the first days of testing (first alpha build to be precise) this "bird" used to have a little glitch which sometimes caused the Pigeon's beeping never to cease. This made it
the most feared trap solely because of the sheer nuisance which this sound was, but in the end this glitch was the inspiration which led to the creation of the Addicter. 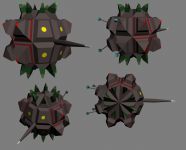 This little nuisance is not capable of delivering even a single point of damage, but when used wisely can be the most lethal of them all. The Addicter sticks to one rebel and hides its presence from the bearer. Once it's done so, it will proceed to cause its target to hallucinate – anyone unfortunate to be subjected to them will see sudden explosions, hear random sounds as well as will see fake traps being built around them. And even once one realises what's going on they still won't be able to fully tell the difference between what's fake and what's real. Lasts only 30 seconds, but is dirt cheap.

Random fact: The Addicter has caused deaths of more people than it gets credit for. Many, including experienced, rebels have jumped down a ledge, run into a real trap or fell off when scared by a sudden explosion or just to avoid any impending „doom”. The writer of this post himself jumped off a ledge to his death in order to „save” his team from a Pigeon presumably being targeted at him. 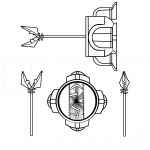 When you need solid support to ensure that rebels will suffer a quick and painful death, look no further – the Devourer will get the job done. It's going to wait patiently until a hostile comes within range, and once that has been done it will move forward to capture its prey. Once it gets close enough the target is paralysed (it might do it instantly if the rebel is close enough once he's spotted! Handy, isn't it?), the trap shall grab them just to pull them back and slowly consume. The victim can only watch as they die hoping that some unexpected (right?) help will come to free them. Your ideal way to deal with all the lone rushers, fast and efficient.

Random fact: Due to the fact that the placeholder model used for the Devourer is a fridge, and that it had numerous small glitches causing players to get stuck waist-deep in concrete upon getting freed (unfortunately some people don't have a sense of humour so I had to fix that ;) ) the Devourer was often called „Killing fridge” or „Raping bookcase of death”, the latter being a result of some players mistaking the fridge for a bookcase.

This is the end of the first part of this short summary of the traps, the next update will come „as soon as possible”. It might be another part of „Trapopedia” (I love the pronunciation), it might be a gameplay clip or something completely different. It will definitely be something though :)

I love the addicter, and I'm looking forward to playing this.

Of them all, only the addicter caught my eye. Ingeniousness.

Clever. I want to use that addictor so much. Friday night, with a few beers this could be fun as hell to play.

I've been playtesting mostly with friends, all on voicecomm and with alltalk on. Gotta admit (hype, hype, hype! :) ), it's amazing when everybody is either panicking, laughing or shouting for help. And that's why I need to use Source demos to record footage first, to disable voice chat later on while making an avi out of it. Plus, it's hard to keep yourself from making some obscene remark after getting blown off a crane to certain death. ;) There're still some more... insane features coming in, gonna mention them once I get all the traps described.

Is that a pidgeon?

I don't really get what you mean, but yea, there's a pigeon described in the news post. :)