Post news RSS Touching the world has an impact!

I got some new features! Even more fancy then the last one! (weather system)

World gets mangled through collision!

I managed to make it work that touching the world deforms the world. When the world gets hit it gets actually mangled, bended and deformed depending on various variables. This can also happening by simply touching/scratching a obstacle. Lots of different particles for the different surfaces and weather conditions make it also look like the matter breaks off it. This destruction can also reveal underlying textures and show cracks and stuff like that. Different strength of the different obstacles as well as impact velocity is also taken in account. It is still pretty over top in the game but not like you can deform the world to get rid of obstacles. 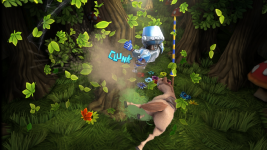 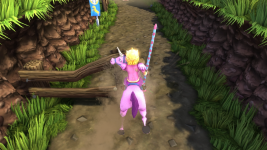 In the beginning I only wanted to see if can deform a mesh simply by passing a position to the shader and then pushing, a spherical gradient masked bit of it, inwards. This was fairly easy to get working but it didn't looked that good. In the end I produced a huge amount of logic. Its now also using several deforming solutions at once but its still pretty cheap performance wise because its all in the shader. There are just several variables that get passed to the shaders, like position, strength, radius. There is also a very quick animating of the "amount" variable which makes it look, along with the particles, quite smooth transitioning.

here is the new stuff in action:

Its still not perfect and a bit extreme sometimes but that will be more polished.

Because its fun to just barely touch obstacles on purpose I made a bonus points system around it. So you get gold for scratching obstacles and can make combos when you make another scratch in time. Its pretty hardcore though but when you are experienced and play risky you can rack up quite a lot of gold with ease. Its currently like a insurance, a "scratches and bruises" insurance and you only have it after you became a knight. So that bonus points system is not in the easy squire mode and the story mode. 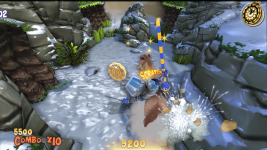 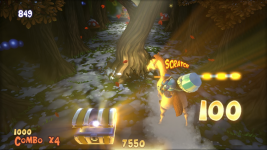 The safety rope is a cool way to make a bit more distance even after you already fell from your horse. Because a real knight can't be stopped just by falling from his horse! When you smash into a obstacle but not frontal, so in way that your horse still can keep going, you will fall from you horse but the rope, that is then attached to you and connected to the horse, will still keep things going. But there are a lot of things that make riding harder then: the view distance is much les then because the camera has the knight in the view. The strafing is les fast and the jumping les far. You obviously can't joust and you also can't use power ups. When the knight comes under the feet of the horse, the horse will also fall. 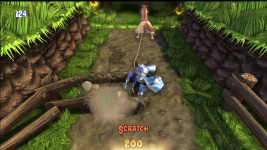 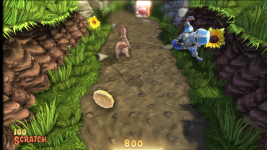 There are now body mutators that you can unlock, here is a quick look of what kind of perfect bodies you can build:

(you are also free to do something inbetween)

There is now also a ice cave, the normal cave can also freeze to a ice cave while you go through it. 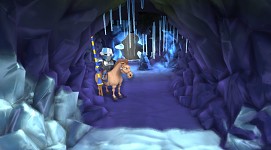 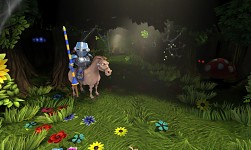 This game is looking so amazing. You guys are doing such a great job. Keep at it. :)

heh that looks really nice
especially "Touch the World"
lookin forward to it.

Game is looking great! any idea how much it will cost? and will there be a steam release

Not sure yet about the price but I can already say it will be no high price. Steam release is not in my hands unfortunately all I can say is vote, vote and vote here: Steamcommunity.com

You guys are doing a great job in making this!