Orc-folk have long dwelt in the great Misty Mountains, tribe vying with tribe, chief against chief in a brutal struggle for dominance. But with the rise of new powers in the North – the Witch-king in Angmar, the shadow settling upon Dol Guldur – the tribes have begun to unite and to multiply. Joining with others of their kin in the Grey Mountains, and making pacts with the realm of Angmar, they look now to spend their new strength in wars of plunder and conquest.

Orcs of the Misty Mountains

The Misty Mountains were raised as a wall, some say, by the power of Melkor in the days of the world’s youth, in order to hinder the riding of Orome. The mountains are more than a physical barrier. Their sides are scored with caves and tunnel entrances, and at their roots nameless things wallow in the dark.

Orc-folk have long dwelt here, tribe vying with tribe, chief against chief in a brutal struggle for dominance. But with the rise of new powers in the North – the Witch-king in Angmar, the shadow settling upon Dol Guldur – the tribes have begun to unite and to multiply. Joining with others of their kin in the Grey Mountains, and making pacts with the realm of Angmar, they look now to spend their new strength.

For centuries now have they harried the Dwarves, who once laid claim to the eastern slopes and caverns of these mountains. Now the people of Durin hide themselves in their ancestral halls, bereft of allies. Only Moria itself remains in their possession, a city and stronghold so far impenetrable to the Orc-hordes.

Many of the tribes are eager to try their strength elsewhere, to sweep into the lowlands to loot and burn. Their warriors are swift and cunning, hardened by raids against the Dwarves and goaded by chiefs greedy for riches. But some aspire to more than plunder. The mightiest Orc chieftains, enflamed by some dark urging, aim at conquest, to bring ruin and terror to the proud Dwarf-realms and the faltering rule of Men. 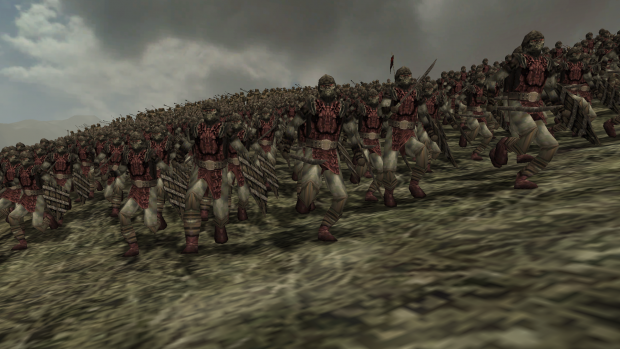 Orc-raiders are willing enough to plunder unguarded villages and join together with larger forces for a short time, though their wicked scimitars and quite good armour cannot compensate for their lack of skill and courage. Only large numbers of these Lesser Orcs will prove effective in battle, though unscrupulous captains may find a use for their single-minded savagery by sacrificing them in order to distract the enemy and win elsewhere on the field. 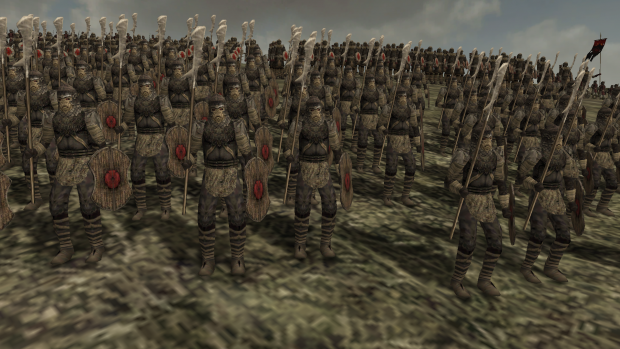 More organised than Orc Raiders, fighters in an Orc-band are disciplined enough to fight in formation – but only just! These bands are often formed when Orc tribes go to war, whether to satisfy their own lust for plunder or by the urgings of some greater will, and they are capable enough by Orc reckoning. Still, despite some armour and even a little training with their polearms to stop cavalry, these Orcs are quite ineffective in battle against experienced soldiers and must rely on vastly outnumbering their foe. 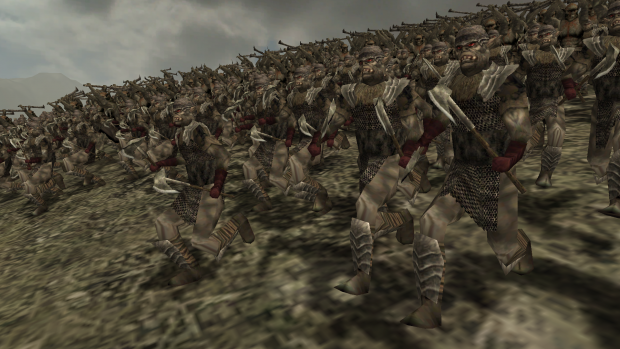 These are savage Orcs, with good armour and a menacing weapon in each hand. Orc-blades sometimes assume positions of power amongst their lesser kindred, and they seek to keep these positions through acts of savagery against their enemies. Finding that they are better suited for attack than defence, a commander may send them to outflank a foe or swiftly cut down lightly armed troops. Nevertheless they will still need to outnumber their enemy if they hope to win the day on the battlefield. 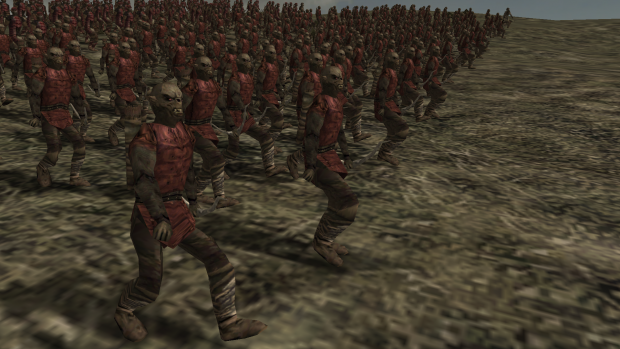 Though clothed in some armour picked up from the battlefield or from fights with others, these Snaga are the very weakest of Orcs and their skill with the bow doubtful at best. They will likely be massacred in close combat, and it would take an inspiring captain indeed to keep them on the field if they should be forced to fight hand to hand. Used in great numbers they may be of some effect. 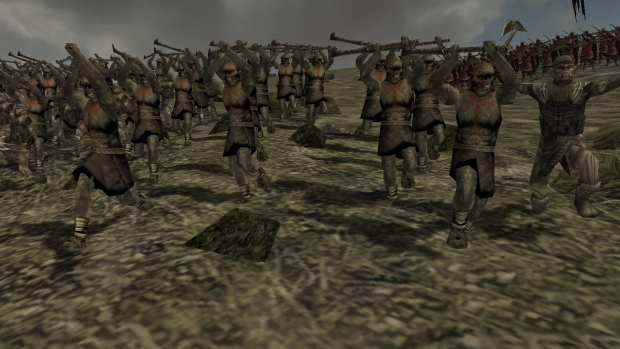 These greater Orcs wear little armour to restrict them, but that should not fool their opponents. Their tough, sinewy arms wield their cruel weapons with a terrifying strength. Once unleashed upon the enemy, there is little stopping them. Great Orc Berserkers are not cunning or skilled warriors but they are often the most feared of the Orcs because they will not cease their assault even in the face of certain death. 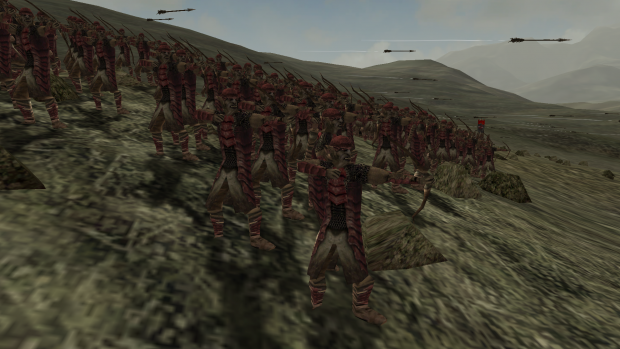 These are lesser Orcs with good scale armour and a little more skill with the bow than their Snaga counterparts. In great numbers Orc-hunters can loose an impressive volley of arrows, and though many of these will miss their mark they will often disrupt an enemy formation. They do have a spear to fall back on should they be attacked, which gives them some protection from riders. 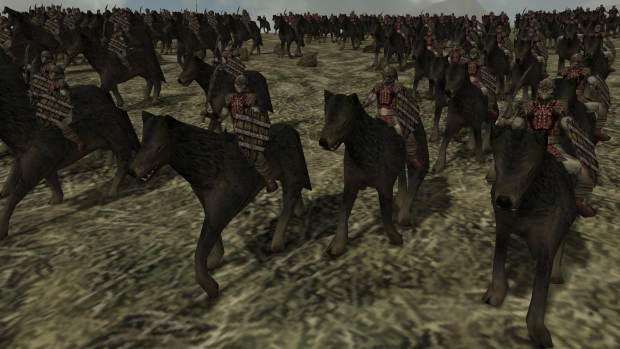 It is not usual in battle to fear the mount more than the mounted, but the Warg Riders are an exception. The lesser Orcs who ride the Wargs are chosen for their agility in the saddle, not the strength of their sword-arms. The Wargs indeed possess a cruel intelligence that often surpasses that of their riders, who seek to fend off attacks aimed at their mounts and cut down foes who find themselves within reach of their curved blades. Horses are terrified by the beasts, but the unarmoured Wargs are vulnerable to arrows – and all Wargs hate fire. 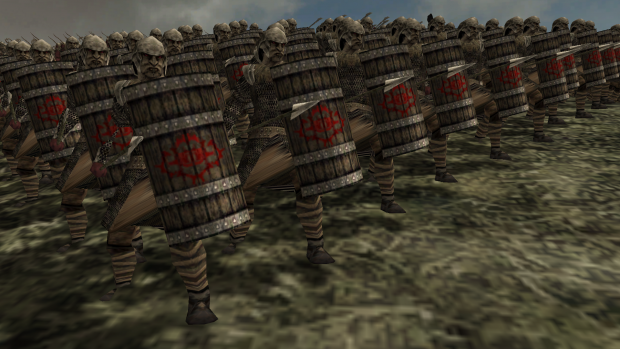 These Orcs clutch a spear in their fist and a shield at their side, their great sinewy limbs and stature marking them out as superior to the smaller goblin-folk. Almost man-high and bold by the standards of their kin, they are bound together in their unit by a clannish, fierce sense of discipline. These warriors have weathered many raids and campaigns, and in battle they provide a stubborn core for the sometimes too-aggressive Orcish host. 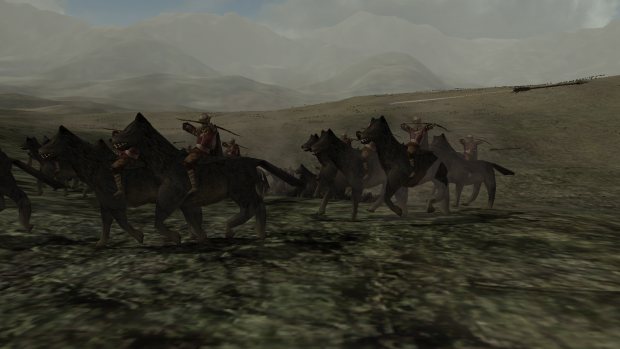 Although these archers are not the most skilled, their mounts are a great danger to an enemy, especially horses, should close combat be engaged. Their speed, however, makes close combat relatively rare. More often, Warg Archers prowl the edges of a battlefield, where the Orc riders can pick off vulnerable targets from a distance. The Wargs themselves are vulnerable to missiles, however, and greatly dislike fire. 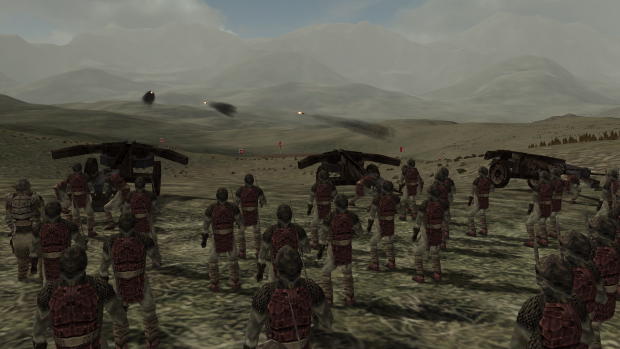 No bow of yew or lance hurled from horseback can strike a foe with the force of the bolts propelled by these ingenious machines. Worked by Orcs who delight in clever devices of destruction, Bolt Throwers are most useful in open battle, against a slow-moving but heavily armed enemy formation – but they can also batter down gates or wooden walls in a siege. The crew will defend their machines for a time, but are liable to flee, so should be protected by stronger warriors. 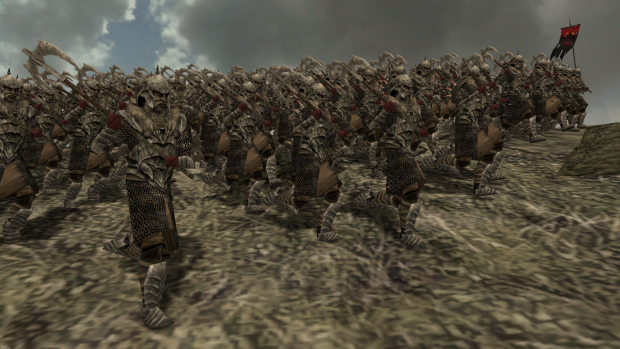 Wielding great axes and wearing spiked armour, the Great Orc Champions are strong and cunning warriors, capable of matching even a well-trained Man in combat. Their weapons are heavy and wickedly curved – the better to smash through leather or mail – and before battle these Orcs are given to unleashing an unintelligible roar that stirs their black blood and urges them on to the fray. While lesser Orcs may flee, these champions revel in the savagery of combat. 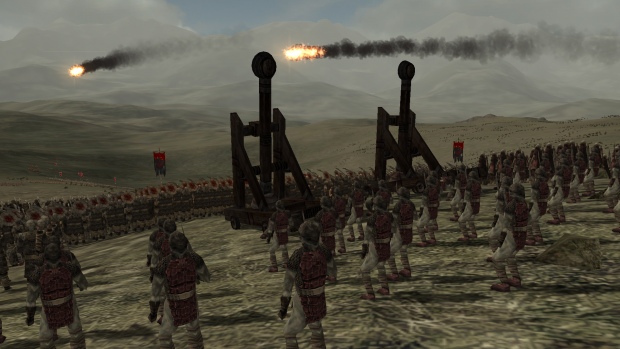 These large contraptions propel boulders or shot at great distances, shattering walls and towers or pummeling enemy formations in battle. The impact of solid stone is most effective against buildings and defensive structures, while against enemy units fiery missiles will spread terror in addition to raw damage. The crew of these awful weapons are eager enough to watch their handiwork at a distance, but are not likely to stand for long if they come under attack. 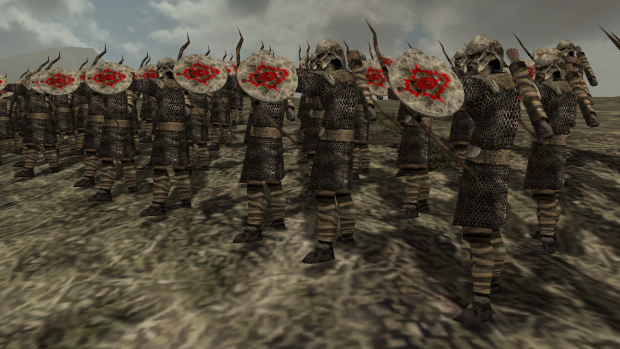 These well-armed Orc-warriors are fierce and bold, made more so by the quality of their gear and their manner of fighting: preferably from a distance, with the strong horn bows they bear. When they have ensured they have the upper hand, they do not hesitate to throw themselves into melee, where they wield their wicked bent swords with fury. Riders can be a great danger to these fighters, so they prefer to target horses with their arrows and surround themselves with spear-armed troops. 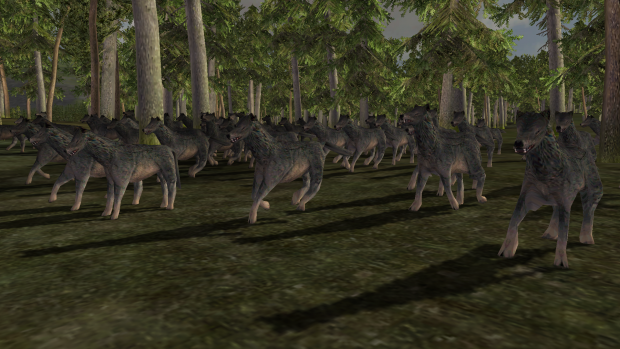 Wargs are both intelligent and ferocious and all horses fear them, and thus all riders that come against them are disadvantaged in battle – though foot troops have a greater disadvantage: they cannot run away! The claws and fangs of these creatures are deadly as a blade in the hand of a warrior, and they spread fear wherever they go. Wargs are vulnerable to missiles, however, and greatly dislike fire. 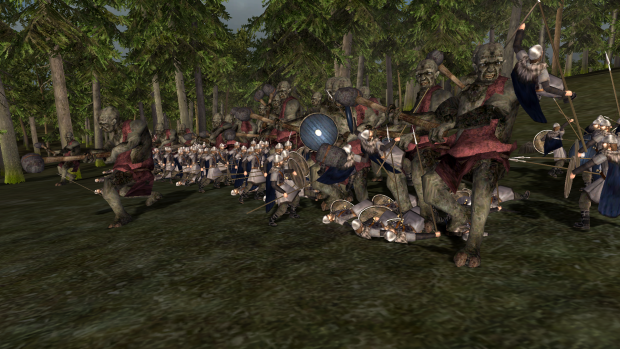 These great brutes are useful tools to those who can train them – though the training is far from easy! Their tough and scaly hide easily turns aside all but the most forceful blows, and their huge arms wield massive cudgels that smash foes into the ground. Hill-trolls troubled the lands of Eriador in years past, but they rarely gather under the leadership of an intelligent master. Properly controlled, they can be a devastating force on the battlefield. 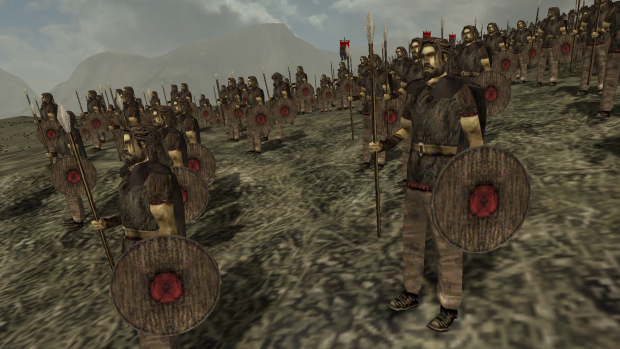 In most settlements can be found a few ill-favoured men who are eager to upend the old order, even if they must work with Orcs to do so. These rabble are poorly equipped as a rule, but can arm themselves with spears and rough shields at need. Motivated mainly by the prospect of plundering their neighbours, they make ill-disciplined soldiers. 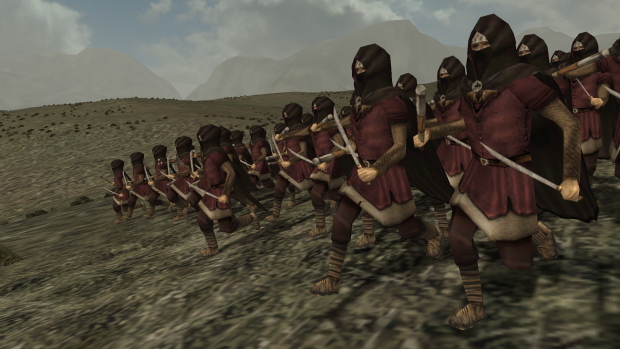 A cut above the rabble that can be easily persuaded to plunder and fight for an Orc-host, Ruffians are more cunning and skilled fighters who yet lack the training and discipline of proper warriors. Armed with clubs and long knives, they may carry the day against militia troops but are most effective in ambush or with greater numbers on their side. A well-timed flank or rear attack suits these men and may also meet with success – but if they cannot quickly scatter their enemy, Ruffians will be eager to flee. 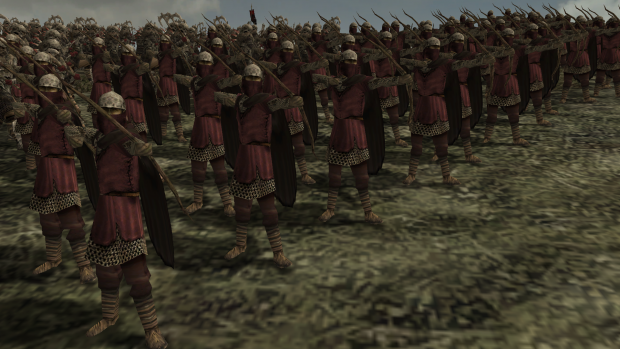 Slave Drivers are better-armed Men in the service of an Orcish host, entrusted with hunting down and delivering those who will toil in the service of the Orcs. If needed for war, they can be called upon to join a host on the march, where their woodcraft and skill with the bow can prove of some use. They are also armed with swords, though they prefer to let the bolder Orc-warriors bear the brunt of melee. Despised by their own people and scarcely trusted by the Orcs, they prefer to fight rather than allow themselves to be taken prisoner, but if their host begins to rout they themselves will choose flight rather than defending a lost cause.

meat is back on the menu boys!

I was looking forwards to the Orc facion in Wainriders. And I have to say, Im impressed!

Glad you guys like them - it was a lot of fun taking the sub-roster that were orcs in DoM and turning them into a proper faction for Wainriders :)