The lands southeast of Mordor are dry and hard, but above the stubborn grass and stony plains the skies are clear. In between dwell men who are likewise: tough and clear-eyed, ever looking to the horizon. Whether the chieftains of this land will bend the knee to the Power that has favoured other nations with gifts and rewarded their service with might, or choose a separate path, less certain but more free, remains to be seen.

The lands southeast of Mordor are dry and hard, but above the stubborn grass and stony plains the skies are clear. In between dwell men who are likewise: tough and clear-eyed, ever looking to the horizon.


Raids and petty wars are common with the people of the southlands. Of late, some of these tribes of the Harad have united and grown strong, but for now their gaze seems turned to the west, toward the cities and strongholds of the tall sea-kings that are known mostly as rumour in Khand.


To the north, a mighty people has arisen, the dust of their chariots’ passing broken only by the flashes of their spear-points – but Khand is also a land of warriors and hunters. Whether these folk come as powerful allies or as would-be conquerors, the people of Khand will be ready.


The chieftains of this land know the power of the one some call Lord of the Earth – his iron-bound stronghold in the East, his promises of mastery. But in their dreams, they may hear the horn and hooves of a laughing hunter who passes over the plain like a thunderhead, then fades into the west. Whether the chieftains will bend the knee to the Power that has favoured other nations with gifts and rewarded their service with might, or choose a separate path, less certain but more free, remains to be seen. 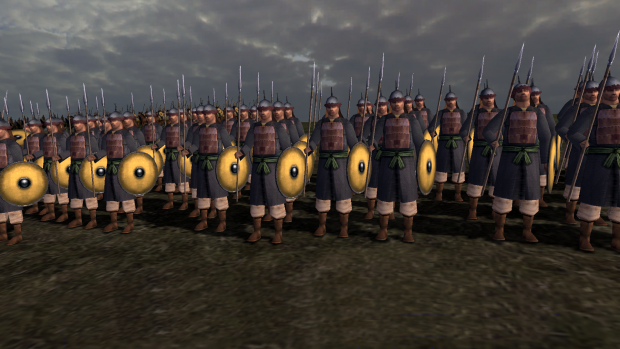 These spearmen from the lower reaches of Khandian society are used on the battlefield only at need, for they do not receive the same level of training as most other soldiers in Khand; and though they are naturally swift of body, this cannot compensate for good training. Wearing some light armour, they are suitable garrison troops and will provide numbers to a Khandian host, where they may best serve fending off light cavalry or similarly poorly-armed infantry, but they will quickly flounder against superior troops. 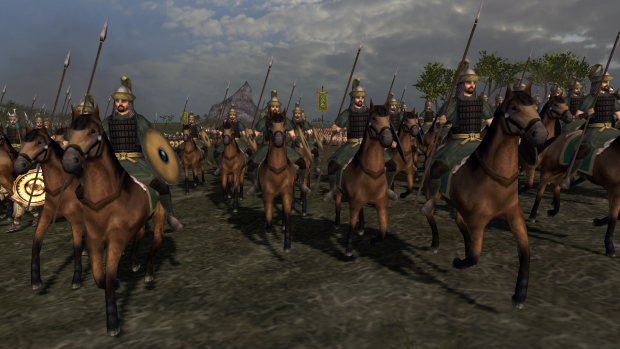 These lightly armed horsemen provide a swift and deadly arm to the hosts of Khand. Skilled riders of the trackless plains, they excel in the sudden charge, preferring to strike into the flank or rear of enemy formations. Although their shields and armour provide protection in melee, they are not among the heaviest of Khand's forces - but, supported by infantry who can hold the foe and archers who can thin their ranks, Nomadic Riders are capable of turning the tide of battle with a powerful charge. 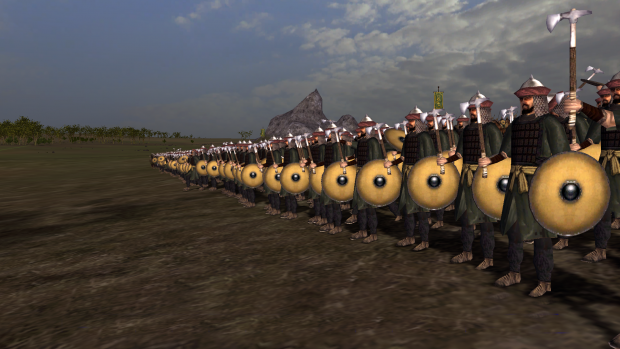 The elite warriors of Khand prefer to ride to battle, but Khandian chieftains know that infantry has its uses. These aggressive warriors are sent to attack enemy infantry formations, allowing bowmen and cavalry to perform their manoeuvres unimpeded. These are not hardened veterans, but are more experienced than the watchmen provided by most towns, and they are eager to come to grips with less disciplined foes. 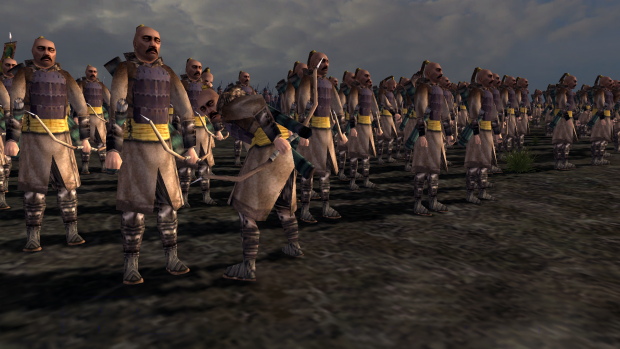 These hunters and vagabonds are long inured to the hardships of the open steppelands of the wild East. They travel light, wearing little armour, as turning aside a blade thrust in a confused melee is not a concern for these men most of the time - their preferred tactic is to launch a volley of arrows from their compact bows, then fall back before a foe can organise a counterattack. In this kind of battle, speed and endurance serve them better than any armour. Of course, they must be wary of the arrows of their foes, and they are particularly vulnerable to cavalry. In the open plains, if they are unable to destroy mounted foes with their arrows, these archers will be cut down with ease. 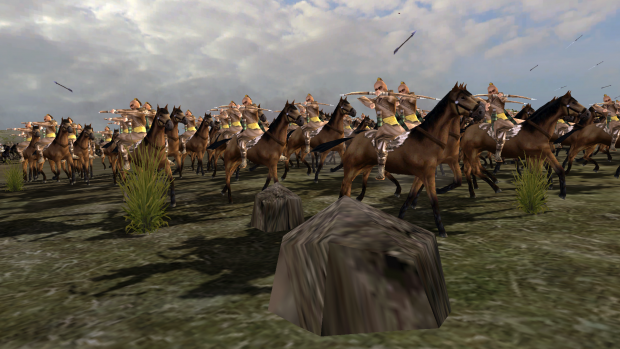 From the plains of Khand are recruited the Steppe Outriders, mounted bowmen of some renown. They wear their hair braided into the topknot which sets them apart from other Easterling warriors and marks them as steppe-folk of Khand. They carry powerful compound bows, the design of which has been perfected by many years of horseback archery. Though they ride with no saddle, their control of their horses seems no worse for it: the mounts move as an extension of the rider, guided by the shouts of their masters. They wear little armour, so as to leave them better able to move freely on the horse, as they need as great a field of visibility as possible. Although this leaves them vulnerable in melee combat, they should have sufficient range and speed to avoid being pressed by either infantry or cavalry, and should only be used to engage an enemy at close quarters in dire need. 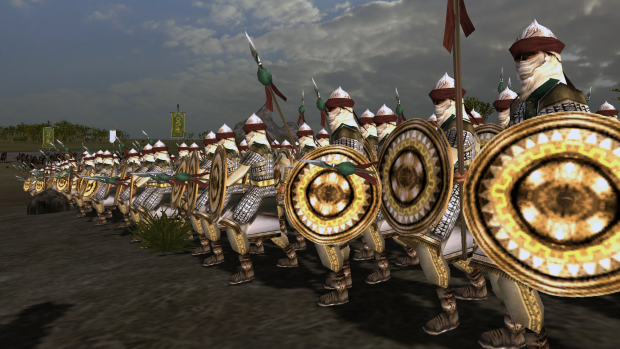 The men of the East are known for their cavalry, and Khand is good country for riders – but not every battle can be won with the lance or the bow. Spearmen of Khand are stalwart infantry, trained to stand in the crush of battle and hold off an assault, whether by cavalry or footmen. They are well armed for this purpose, bearing a large round shield and scale armour, and when protected at the flanks are among the most reliable soldiers of the chiefdom. 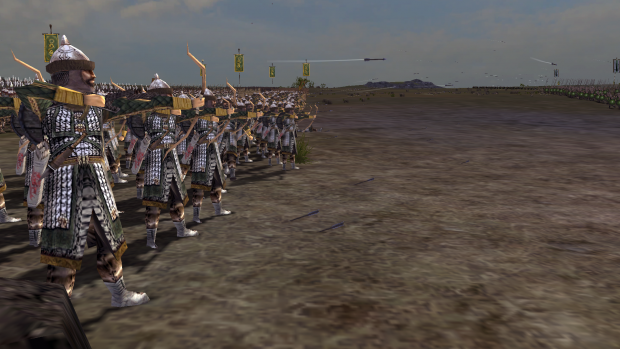 The Archers of Khand are men of admirable skill with the composite bow. They are equally skilled in the use of the spear, making them surprisingly versatile fighters, able to strike down foes from a distance or fend off those who get too close. Typically these men are minor nobles or landowners, recruited to the armies of the more powerful nobles of Khand. As men of high status they learn to respect the will of their commanders, and will follow orders to the best of their ability. 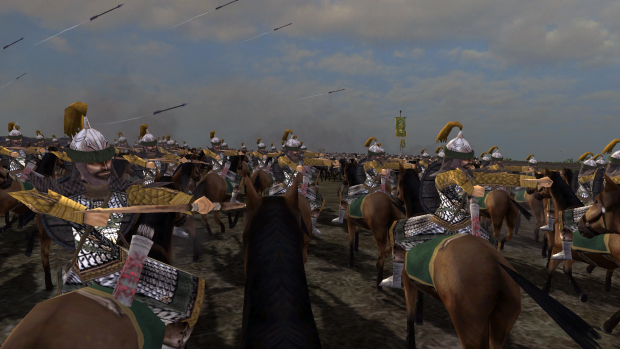 These riders take to the saddle to earn experience in war and the respect of their peers. Being of the ruling class, they can afford fine lamellar armour and an iron helm, with the best quality weapons available. They carry bow and spear and use both with equal proficiency, striking down enemies at range or delivering a killing blow in a massed charge. To be seen to flee a battle without due cause would be a shameful thing indeed for these aspirational young men, and they will stay and fight until hope seems lost. 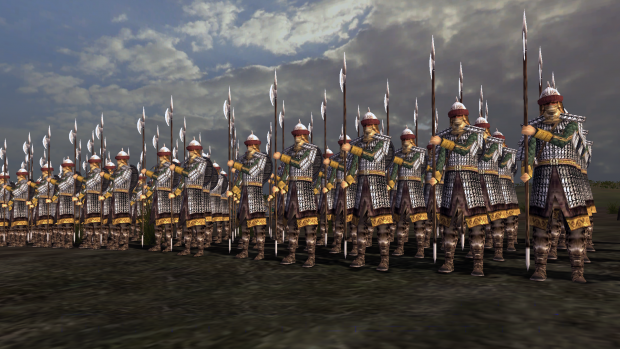 These are among the finest infantry available to a chieftain of Khand, boasting quality armour and drilled in fighting in formation. Off the battlefield they make superb guards for a Khandian lord, and in war their halberds are a danger both to horse and man, making them a threat anywhere on a battlefield. Whether staving off a charge of riders or anchoring the flank of a battle-line, the Warriors of Khand are as dependable and loyal as they are versatile, holding their ground or cutting a way through a stubborn foe. 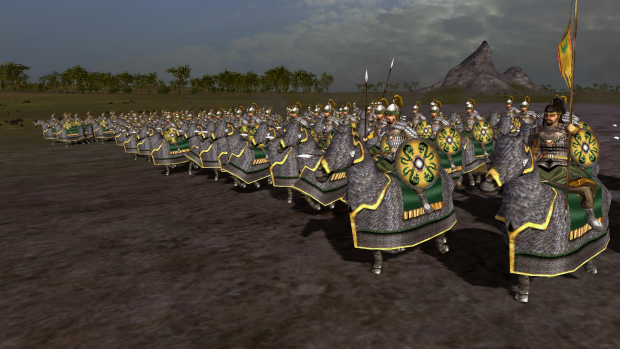 The Dragonshield Riders are men of fearsome skill with horse and spear. They carry a heavy lance, heaved with strong arms from the vantage offered by mounts almost as heavily armoured in lamellar as their riders. Far from the swiftest of Khand's riders, they fear little on the battlefield, and when their charge is spent they may deal crushing blows with the maces they bear. Typically these men are minor nobles or landowners; as men of high status they learn to respect the will of their leaders, and will follow orders to the best of their ability. 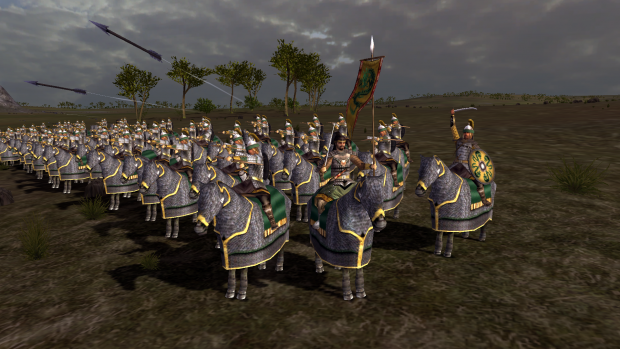 The Dragon Guard defend their chieftain with bow and sword, depending on their armour - and that of their horse - to turn aside the blades and shafts of their foes. These picked companions are utterly loyal, chosen for their obedience as much as their skill, and armed with the mightiest bows of the East and the finest armour available. Whether sending unerring arrows into an enemy formation or riding down foes with their long sabres, these fearless soldiers will prove time and again that their repute and station is well-earned. 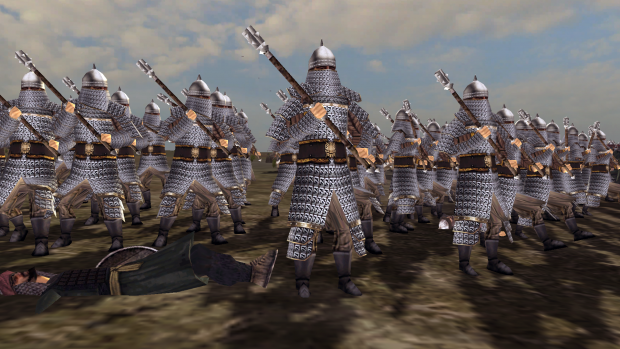 The Men of the East know the King of Kings, Lord of the Earth, has always controlled the fates of nations. Some claim he dwells in a fearsome stronghold ringed by fire and strengthened by iron. Chieftains of Khand who display appropriate reverence may be granted the services of Iron Tower Warriors: strong men encased in metal and wielding gigantic maces. Once they have unleashed their battle-cry they become grimly efficient killers, battering even well-protected foes with their brutal weapons. For all their might, they are best held back for a decisive blow, lest they spend their strength too early and be worn down by the enemy. 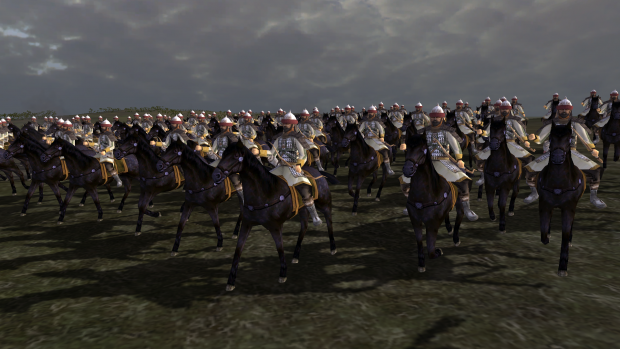 The dry wastes of the East see much traffic, but they are also home to many dangers. Merchants who travel the lonely trade routes often go well-armed and horsed, adept at shooting from the saddle like many in Khand. For defense of their goods and person they wear fine lamellar armour and carry long sabres. Though their primary goal is to profit by the selling or buying of goods, they may offer their services to a lord or chieftain in need of skilled horsemen – but, being well used to negotiations, they will charge a hefty sum!

Love the idle animation of that one khand steppe archer :)

Haha, so happy someone else enjoyed that :P

Oh my, are the Iron Towers based off Jin Iron Pagodas? Anyhow, great work.