The availability of amazing tools is helping us all make better games. At the moment, I’m mostly a one person team, but I’m not truly making a game by myself. In this post I write about all the tools I'm using to make Eastshade, and a describe each one's place in the workflow.

Posted by DannyWeinbaum on Sep 3rd, 2014

The availability of amazing tools is helping us all make better games. At the moment, I’m mostly a one person team, but I’m not truly making a game by myself. If I make a fantasy cavern scene in Cryengine, to whom do I owe its beauty? My skills as an artist? The millions of man-hours that went into building the engine of which I had no part in? The fathomless ocean of computer graphics advancements that came before us of which I nor Crytek had any part in? If we are all creative snowflakes, then we are creative snowflakes that sit on a mountain of snow that has fallen before us. I want to talk about all the tools I’m using for the making of Eastshade.

At the center of this tapestry of game dev tools is the big U. In my life, I’ve spent considerable time in five engines: Cryengine, UDK, two proprietary engines, and the big U (fine I’ll stop calling it that). Unity is a game engine unlike any I’ve ever used, and I think its structure is revolutionary. Most engines have proprietary origins, and as a result, even publicly available engines seem built for a particular game, and then modified to be general. The legacy of fps is rampant in both Unreal and Cryengine. Unity is a general purpose engine from the ground up, and a blank slate like no other. Its a framework is simple, modular, and extendible. Everything is a gameObject with components attached. Every component is a class that extends monobehaviour. If I dreamed up an engine, the engine would work like Unity. 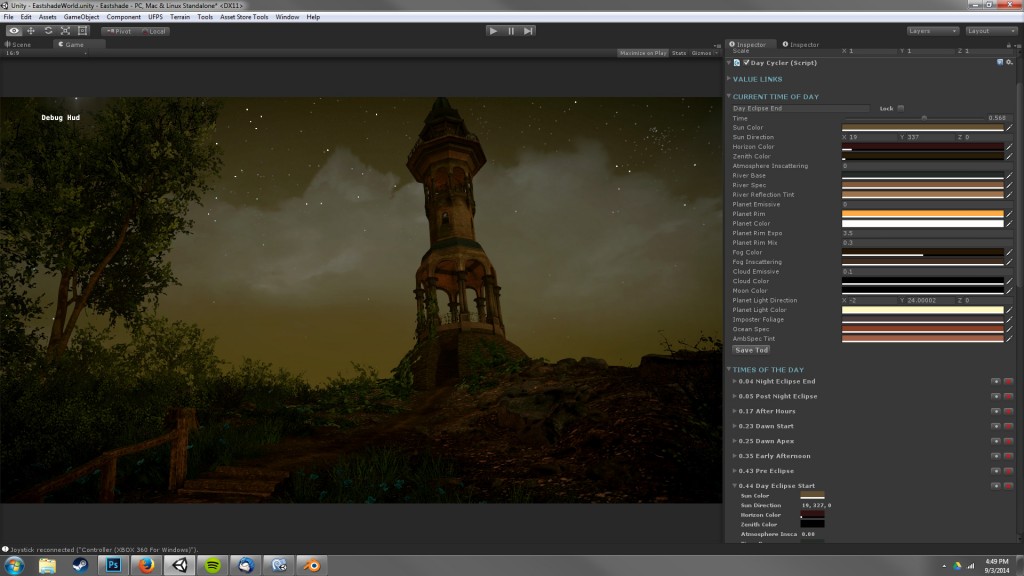 Among the great benefits of using Unity is the asset store. Other developers have built fantastically modular systems that you can purchase for almost nothing and plug into your game. There’s never been a better time to be a one-man-band. Since I want Eastshade to have a unique aesthetic, I generally stay away from models/textures/music/UI graphics/sprites or the like. However, the the extensions and utilities are invaluable.

UFPS - For me, the only price I paid for this asset was the time I spent learning how its insides work well enough for me to implement my own gameplay on top of it. Though I still get the feeling I’m not using it totally as intended, its player controller and input system are the backbone of the player controls in Eastshade.

Shader Forge - I actually would have had a really tough time building the look of the world without this extension. Every shader bar the foliage was built with Shader Forge. I wouldn’t have the chops to write something like a Y projection for moss and snow, or my own implementation of a global cubemap managing system had it not been for the simple node based workflow this asset provides. 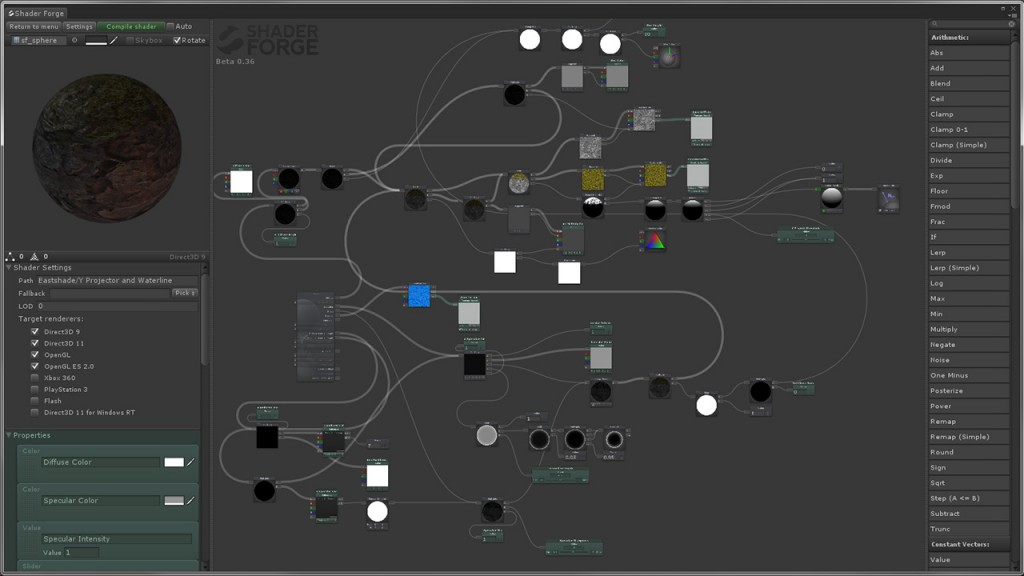 Advanced Foliage Shader - The screen real estate that foliage takes up is considerable, and AFS, in addition to allowing my vegetables to flutter gracefully in the wind, looks beautiful.

DevConsole - A simple but important thing to have, I think, is a way to call certain functions from inside your game for debugging purposes. DevConsole makes it easy to define new console commands, even ones that accept arguments.

FogVolume - For all those foggy, foggy times. Inscattering is has a big visual impact on long site lines (which you should have a tone of!).

SplineBend - I use this for all my roads and paths. I love how simple and open ended this asset is. I prefer it to EasyRoads for sure. Thought I still use EasyRoads sometimes, not for building roads, but to shape my terrain oddly enough.

Shadow Softener - Soft shadows are nice, but nicer is the 10 fps I reclaimed when I started using this asset. Perhaps Unity 5 will negate the need for this asset, but currently soft shadows is essential for performance alone.

Every prefab placement painting tool on the store - I’m pretty sure I have them all now, but I’m skeptical to endorse any of them because none of them quite satisfy me. I’m half tempted to write my own at this point.

Honorable Mentions - I was using skyshop until recently, when I opted to use all my own shaders write my own cubemap controller. There were two reasons for this: The first is that Skyshop’s cubemap blending was more than I needed, as I found I only needed to tint my cubemap during weather changes, rather than switch to a new one. Lerping between cubemaps is pretty expensive, and I really didn’t like the implementation of how you just chose a blend duration and fired it off. I wanted my own night/day controller to drive the change. The second reason is that I found I never needed a full RGBA for spec and gloss (the skyshop shaders don’t allow you to pack the spec into an alpha channel). My last honorable mention would be Daikon Forge, which is a great GUI library, but turned out to be a massive mistake since the guy who made it just stopped supporting it. I made the call to switch to the new uGUI before moving forward with any more GUI stuff. I’ve been using the 4.6 beta and have yet to hit any showstopping bugs.

Git and SourceTree - This doesn’t belong in the Unity section but I’ve no other place for it. SourceTree is a wonderful GUI front end for the almighty GIT. It makes working with version control a lot easier for someone like me, who doesn’t wish to dabble in a command line console to submit and revert files. You may be wondering, “But aren’t you one person? Why do you need version control?” If your spending a lot of time on something its wise to be making iterative backups as you go, and as long as your making iterative backups you may as well be using an application to manage them. Version control is designed for that. I can’t tell you how many times I’ve needed to look into previous revisions after realizing I’ve messed something up. 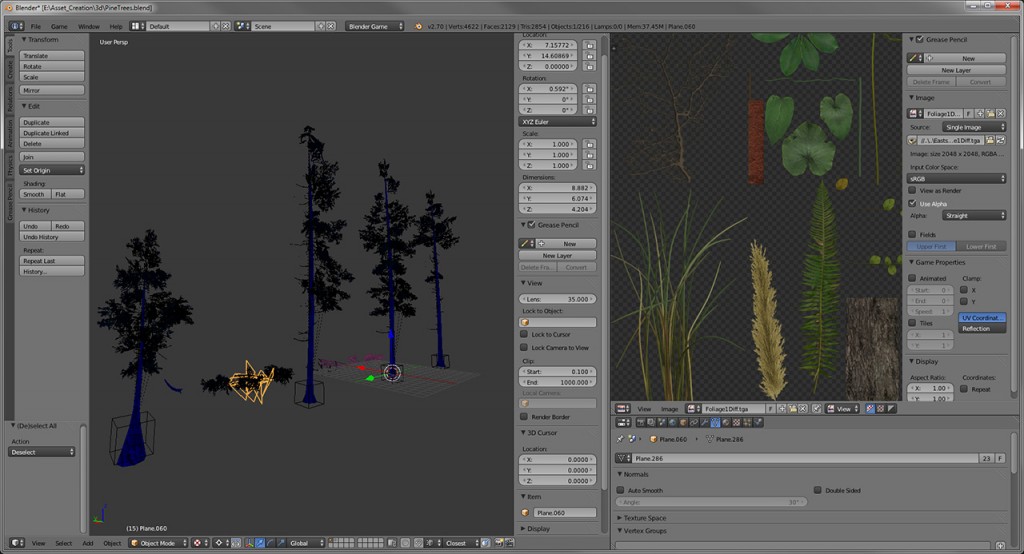 Blender - I first learned the ropes of 3d with 3ds Max, and then spent my professional career as an environment artist so far using Maya, but despite having sunk so many hours into these other industry standard tools, I prefer Blender over them. I wrote a special exporter to make getting my stuff into Unity as easy and fast as possible.

Photoshop CC - I was using Gimp to save some money, but since Adobe did the 10 bucks a month thing I switched back to the tried and true. After using Gimp extensively, I can honestly say it has a long way to go before comparing to PS. All you have to do is try adjusting the levels of a 2048 and watch Gimp slowly loop through all the pixels line by line each time you nudge a slider to be convinced.

Unorthodox Game Dev Tools - If you’re a game artist and haven’t heard of this Photoshop plugin you should definitely check it out. Its the sweetest texture export plugin I’ve ever used, and its author is a nice guy, very responsive, and helpful.

3d Coat - Aside from being an excellent sculpting package, I love being able to drop a totally garbagy mesh (perhaps from a photo scan) in there and convert it to voxels, then convert it back to polygons and decimate it. I also use it for unwrapping organic things like rocks and tree trunks. Its got the best seam making tools I’ve ever used.

Lost of other things - I use quite a few other little programs for content creation often for very specific tasks. Among them are CrazyBump for texture creation, PhotoSculpt which can derive a height map comparing two photos of slightly different angles, and automagically tile textures with normal map and all, and fairly obscure (and free) MeshLab for its incredible UV-preserving mesh decimation features.


I think that’s most of the stuff I’m using. If people find this technical blog posts interesting I could write more about my technical challenges, and show some tools I’ve created myself for my own needs, but I don’t want to pollute this blog with content that doesn’t interest people, so if you guys could let me know if you dug this I would appreciate it!

Hi DannyWeinbaum, nice work so far ! Do you plan embeding some of your 3D models here?