We completely reworked our solar systems and dramatically changed the strategy aspect of Beyond Sol over the last month.

When we started Beyond Sol we wanted to experiment with the concept of a dynamic solar system that would be in constant motion. We thought that if all the cities, planets, and other celestial bodies orbited around the local star it would create a strategic map that would gradually change over time. At the time we believed this would be an original way to generate emergent gameplay in the strategic layer of the game since your allies could eventually drift away from you, or more importantly your enemies could drift towards you, which would change the political and economic landscape over the course of the game. We thought that it could be interesting to fight for constantly changing territory rather than the static territory found in most other strategy games.

This design, however, created unexpected problems. For instance, it was difficult for players to feel like they even had territory since everything was always moving around and you basically controlled a bunch of outposts separated by huge sections of empty space. You couldn’t look at the map and get a good sense of which factions controlled which territory or how powerful anyone was. We also had trouble finding a good speed to orbit objects around the star. If we made them move too fast, it felt strange to see these objects move around so quickly while flying over them, but if we made them move too slowly, players wouldn’t notice the change until 10 – 20 hours into their game, so it didn’t have a meaningful impact on their strategic decision-making.

In the end, we concluded that if we made the world static (no more orbiting around the star), we could make the strategic nature of the game way more interesting. So over the past couple weeks, we’ve been re-working some of our design to introduce a new hex grid to the map that creates sectors to fight over and control. In each sector, you can build different outposts (radar stations, mining stations, etc.) that have different benefits. These outposts need to be defended against pirates and other factions, and most importantly, it gives you a real feeling of territory on the map and it’s easy to see who controls what and how powerful everyone is. 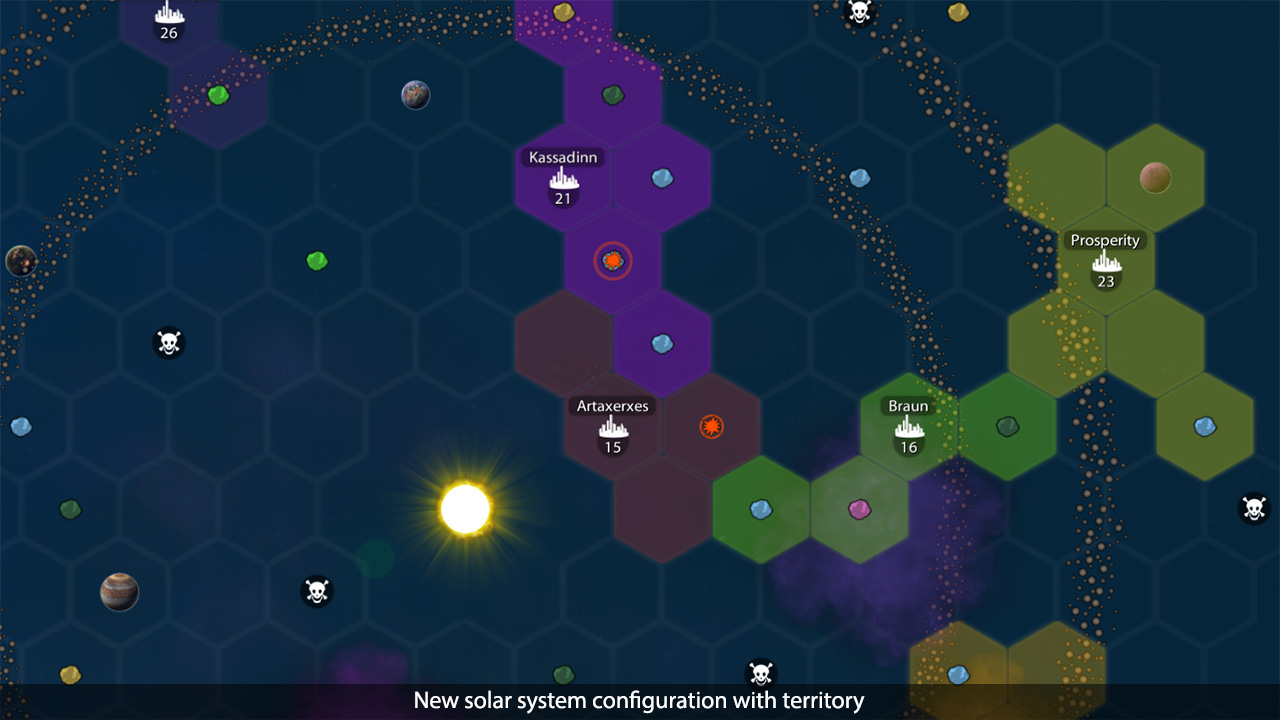 This new design has proven to be incredibly fun and is the key piece of the puzzle we needed to make this feel like a great strategy game. We’ve been doing daily multiplayer playtests and it’s a fantastic feeling to destroy an opponent’s outposts and claim his territory in a war.

We have a lot of ideas for diplomacy and the dynamic economy that will fit nicely into this new design that we’ll be working on over the next month.