Post news RSS The thing I hate more of making games is....

Mechanical scripting kills the designer star (8) Just a sad story about a Game designer that tantrums every time that has to make the save/load system of the game... And this is just a simple system to have some testing running!

But Hell... decide how to save, how to load, what to carry on all the game and what to instantiate when needed, what need to be an abstract system and what to be a physic one...

And the worst is, as I said, you do the programmer job mixing C+, java, Playmaker and pre made assets.

And then Save it altogether. And then repeat all the steps to Load it. In programming there are a lot of mechanical chores, non-creative and ape work that nobody is gonna do for you, so you have to do it anyway. 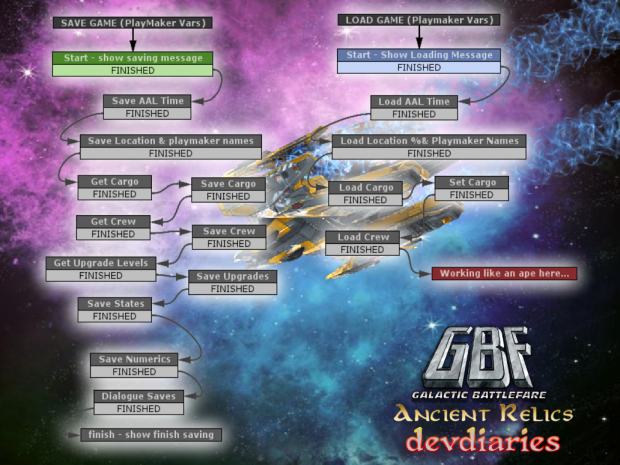 I'm making the first simple save/load system for Ancient Relics now that has a good core (the Space Chart where you do half of the game play is nearly done), and, I have done so many saving systems to date that is only automatic work, (meanwhile I try to calm the cries of my baby), but is Dull, Dull, Dull, and I just come here to say that, if there is only one thing that I really hate of designing games, scripting or making graphics, is the Damn, Save, Load, System. Gaaaargh!

At least, you can gave a happy eye to the visual code with that great game art!

I know what you are saying. I always try and put those chores off as long as possible. I get to the point of trying to figure out how to build an abstract codebase for myself that can be "plugged in" to any game I am working on, provided it is the same engine of course. I have yet to realize this, but I dream of it :)