This is a preview of The Sundering v0.7 which will be released soon. On this version we include a new campaign and the latest changes on the old one. We have worked on more than sixty units for ten new factions for the Old World campaign map. We wish you enjoy the content. Best regards!

Select the campaign and click on "Play Now"! With this new tool we can avoid the M2TW engine limitations and create new culture setups for each campaign! 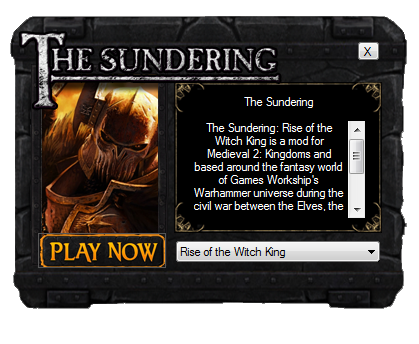 We have developed ten new factions in addition to the thirteen already present on the Rise of the Witch King campaign. The new factions will be available on custom battles and campaign map. 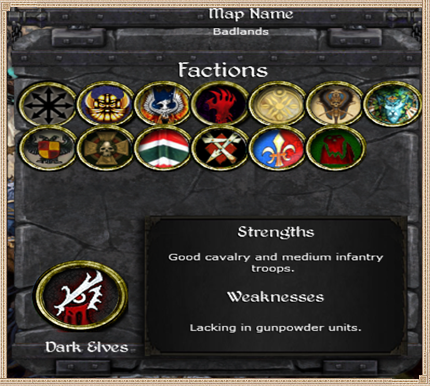 Sixty-two new units have been already added and working on the Struggle for the Old world campaign.
Soon there will be a lot more to fulfill the new factions.

Our new 2D Artist Kelembribor21has been working hardly to finish tons of new ancillaries, banners and loading screens for the new campaign.

Here you have a little preview of the icons: 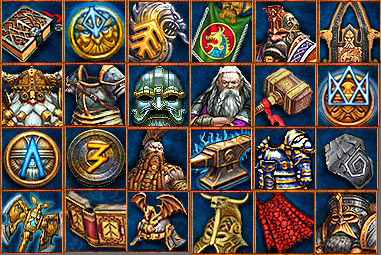 And here you can see some Skaven banners: 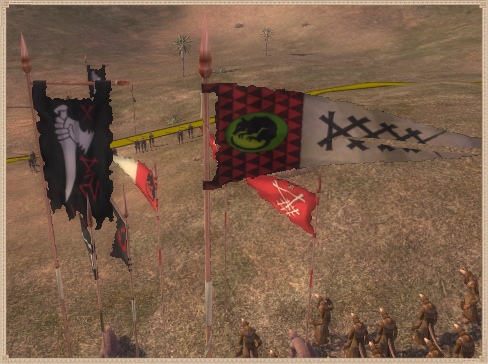 And finally our newest member PaulH has demonstrated his skills with superb building icons for the Tomb Kings faction! 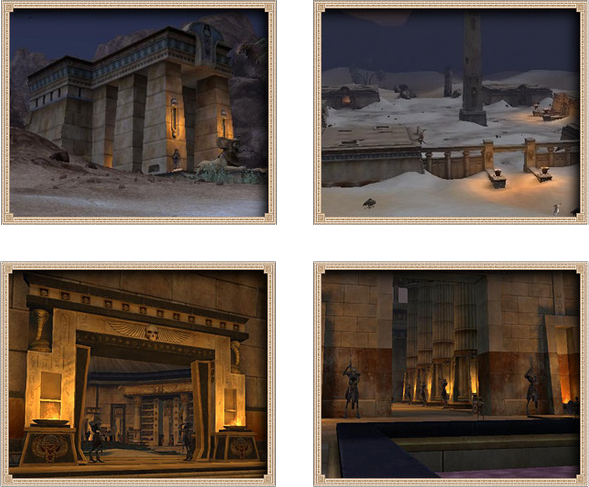 The new version not only offers a new campaign, but the Rise of the Witch King campaign has being improved aswell.
Some of the new models like Minotaurs, Dark Riders or Spites are now available on campaign.
We have also reworked the game balance, so you won't see full stacks of militia spearmen nor cultist.
The AI recruits now in a more mixed way and they are now far more agressive than the latest versions while the addition of cavalry units for the cultist makes them really dangerous.

We have finished the skins for the High Elf settlements. This new feature brings tons of inmersion to the battles. 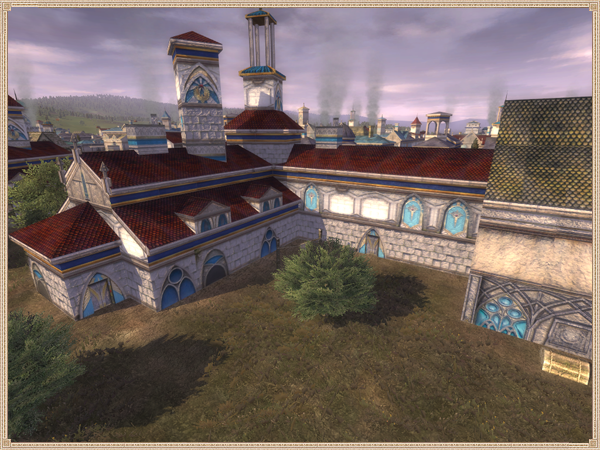 The Rise of the Witch King campaign has been improved with some amazing scripts. Your allies will ask you for help when their capitals are objective of sacrifices. In addition when your capital is besiged, they will send you troops to defend it.
The more allies you have, the more troops you will recieve.
The reinforcer army is composed by units from all over Ulthuan, since is a Phoenix King army.
This gives to the player the chance to use some units from other realms. However the price of the help is pretty expensive, so the decission is not so easy.

The core units of all the factions have been reworked with up to nine head variations and different cloth color schemes. The Naggarothi spearmen have now even their own unit model

We keep working on increase the stability of the mod and we have fixed some annoying bugs, specially Alith Anar during sieges and the Shadow Warriors Hideout building and crashes when killing big beasts.
Comments

Wow i was honestly thinking you gave up on the mod, glad to see i was wrong. I'm still playing 0.62 and it's getting pretty much boring, glad to see you are making a new campaign, "rage of the dark gods" mod has to many bugs to be enjoyed fully but that's where your mod steps in :P

Gave up? Omg no! We have been working even harder! Hahaha

I never expected to see another campaign!!! Great!

My mind was just blown away. I played with every faction on the old campaign , and now another campaign with new factions. I can't wait!

Remember that we have also improved a lot the old campaign. You will be able to experience some great new features and challenges!

I just hope you made less demons appear...every campaign i had an army of demons surrounding one of my generals forcing me to send 2-3 more armies to bail him out XD

Yeah, we have made them less numerous and also weakest. But we have added minotaurs to them and perhaps more units will be added before the release.

I really like the tomb kings, it will be fanatstic (sorry for my really bad english, im spanish)

This patch will take some time, but we will release the 0.68 soon with some of the New factions available in custom battles.

Hello, how is the mod going and when will it be released?

I just found this mod. I am really excited. is the next update still coming I really want to play as the brettonians

Is there a release coming soon, or has this project been scrapped?

Is the project dead?

Where is the struggle for the old world we need a GOOD warhammer game in the total war setting and this mod was the only stable way for that to happen what is going on!

Is this going ahead? Anyway we can help?

Just thought everyone should know that there's pics of the lizard men on twcenter.net in a NEW post which hopefully means this mod is coming

Just thought everyone should know that there's pics of the lizard men on twcenter.net in a NEW post which hopefully means this mod is coming

An awesome faction for this mod would be the vampire counts/sylvania, not sure how it fits in to the story of the sundering or anything but it'd be awesome in the new update

So is this almost done yet? Or has the mod been abandoned?

i have been waiting this mod for years.I HOPE it will be released soon.sooner or later... later is fine too,just release it, please! thanks and good luck!

any updates on this release? looks the real deal plus has wood elves!

is this dead? I'm assuming yes