At long last PlayBlack Studios is showing some sign of life again. We have new media for you. This time it's about a Guard, a Concept Artist, a Modeler and a Captain. And a little forecast for the next update.

Hello Folks! Here we are again. And as you can see right now: We are alive! And so is "The State". As a little excuse for our long absence (and the next which could come) I want to present you the hard work from Mr. ezjamin. He was working like mad the past weeks to bring up our first ever Enemy Character (which is actually finished).

As this alone would be a little bit disappointing I want to show you the way how he got there in form of rendered images and a modders tale. So here we go.

At first there was the guy who made concepts. He drew and drew and someday he had piles and piles of digital paper on his harddrive. One of those drawings was this: 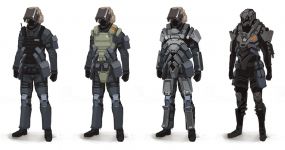 Some of you will remember. He then went to the Captain of his crew, asking him when those concepts are going to be realised. The Captain said that there will be a time when this will happen and the Concept Guy shall wait for it to come.

So he waited. And waited ... and waited. And then, one shiny saturday (or sunday or monday or whatever day) he, the concept guy, found an image in his folder which wasn't his. He looked at it closely. Could it be ... had someone started modeling his guard concepts?

And that wasn't the end of the story. The mysterious modeler who started the Guard model went on and on. Soon he had a high poly version of that blocky thing he made to get the proportions right.

It didn't stop there. Not at all. After a few more days the concept guy and his captain were delighted to see a low poly model with baked normalmaps on it.

And yet a few more days later there was this splendid looking render of a guard in the concepts folder. 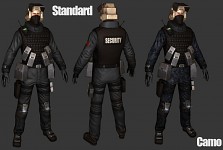 And here the tale ends.

Let me explain why we think that this is awesome. It's very simple. This guy you see there is just not looking like a usual guard you would expect in a high security prison. It doesn't even look like a usual soldier. And that is what we like about it and we're proud of this model and also to have the creator of it in our crew.

Now let me make the forecast.
It's going to get very bloody. You are advised to take an umbrella with you. Also plasma repelling suits are recommended. Other than that the air is going to be very lead-loaded, make sure your limbs stay where they are.

The usual at last:

PlayBlack Studios is hiring again!
We're looking for 3 modelers who are capable of creating foliage. We have a lot of good foliage (as you will certainly know[thx neahc]) but we need more.

Next to that we're also looking for 3 Texture Artists who know how to paint on UVmaps (so I actually mean Skinner ;) ) to create all kinds of Skins for trees, buildings and so on.

And last but not least:
We're looking for a couple of Environment-Texture-Artists.

That's all for today, Folks!
Thanks for reading (I hope you did because I put a little bit of efford in it ;) ).

Very good model. Its nice to see these kind of progressive images.

Yeah me too, but i'am so sad...
I think the modeller are not well enought to make a models from they concepts (that are a great by the way) =\ The model are good, but not so cool as on the concept.
Especially in the question of texturing (( So sorry to see that (
I'll hope he will emprove his skills and the next result will be greater! Good luck to him...

If they wanted it looking any different they could have told me during the creation process.

The modeler sure don't need any more practice tbh.
Well. The model is exactly how we wanted it and if it was to him it could be anything you can imagine.

damagefilter, Ok if you don't need a better quality, i have no questions...

ezjamin, nice media in your profile, and great skills! Respect! ))
You are the author of this model i gues?..
Well if so, it's not a best what you have done, sorry (
But i allready said that the model is good, but i stil thinking it could be better...

I understood what you said,I meant no offense.
It's just that we gotta look out for what is going to be epicly detailed
and what not.
So I think it's fine for an enemie model :)

I imagine he'll do perfectly for what I'll be doing to him !
Hats off to you " ezjamin " for some grade A work ! Keep them comin'.

Progress reels are always fun to watch.. How the model evolves! :)

Nice to see that this awesome mod is alive!